Dale Lynch stood quietly on the slope of a hill just above the elevated deck of the practice tee at Hillcrest Country Club in Boise, aiming a small video camera at Arjun Atwal as he took a series of abbreviated swings, stopping still as a statue with the clubface just above the ball.  When he finally had the tempo just right he took a full swing and launched a lovely mid-iron shot into the pure blue air of a beautiful late summer Idaho day.   Because the tee sits so high above the landing area at Hillcrest, the ball floated off in the distance like a dust mote, but Atwal and Lynch were already back to discussing the swing adjustments they were working on, trusting that the ball would land near its target.   Lynch’s voice was gentle and reassuring, and Atwal was relaxed and trusting as he put Lynch’s tutorial into action. 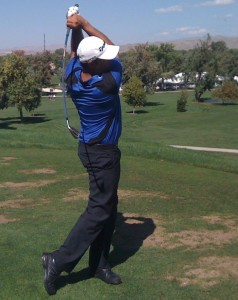 Pat Sullivan of the NY Times filed a story about Lynch  after the 2009 British Open, when Lynch’s student, Matt Goggin, was chasing Tom Watson for the lead until a rash of bogeys late in the final round dropped him into a tie for fifth.  Lynch, Sullivan wrote, doesn’t emphasize “psychology,” but rather “takes a different approach. He has combined a focus on the fundamentals of the swing with an emphasis on building pressure into every aspect of practice. His belief is that it is better to fix any weakness a player has at the driving range than on the psychologist’s couch.”

Lynch’s bag of tricks for building pressure into practice sessions includes a test that asks a player to hit say, six of ten shots with a five iron to a target green 200 yards away.  The first few are easy, but if a player has succeeded five times and has one shot left, that’s pressure.  “Players want to succeed, even when it’s not for anything,” Lynch says.  “They really start grinding, so that’s also when any swing flaws will show up.”

Atwal was in the midst of rehab from not one but two torn rotator cuffs, playing in a Nationwide event, the Albertson’s Boise Open, hoping to reclaim a spot on the PGA Tour in 2010.  Lynch had flown to Boise from South Carolina, where he and his partner, Steve Bann, had recently established the International Institute of Golf, part of the vast complex of Cliffs Communities stretching across two states, with courses by a constellation of top designers, including Jack Nicklaus, Tom Fazio and Gary Player (who was so enamored of the region that he’d moved his design company’s headquarters to The Cliffs at Mountain Park, the course he designed).

IIG had set up shop at the Fazio course, The Cliffs at Keowee Springs, just over the South Carolina state line from Georgia.  In 2010 IIG would open a satellite operation in Asheville, NC, America’s number one retirement town, where legions of active boomers provided a rich pool of potential students eager to improve their games.  Lynch, however, continued to focus on guiding elite players, such as Atwal.  The success of his finest pupils— Geoff Ogilvy, Aaron Baddeley, Matt Goggin—had made Lynch a hot name among swing gurus, inspiring his move to America.  Despite the financial crisis, the PGA Tour is still the premier showcase for the game’s top players from around the world.

Lynch, too, once aspired to success as professional player, but grew increasingly frustrated as his efforts to improve led nowhere.  “I couldn’t get answers to questions regarding my game,” Lynch says.  “Why was it that I was working hard using the standard methods but actually getting worse and not better?”

So he set out to learn what worked, not from listening to experts or reading, but from watching, observing with his own eyes what he saw was working for good players.  “It was just me learning how the swing should operate.  The full swing was my biggest frustration when I played.  How the game is taught now is much different.  Then we were still in what I would call the Jack Nicklaus era—‘keep your left arm straight, head still, drive your legs, swing the club from inside, roll your wrists’—things that have proven to be false.  I say ‘the Jack Nicklaus’ era’ because that’s what commentators thought Jack did—or even what Jack at times perhaps thought he did—but it’s not what he actually did.”

Lynch’s observations took him in a different direction from what he expected.  Other players began asking him to observe their swings, and his suggestions for improvement produced good results.  ”I discovered that I was able to help other players.  My initial reputation was that I was a bit of a nut job, going in the opposite direction from standard teaching at the time.  But as I had some success with the players I was working with, more and more players would come to see me.  It wasn’t so clear-cut a process where I gave up playing first and started teaching—it was rather the case of me gradually learning how the swing should operate for myself, and then helping other players.”

Because he had been a professional golfer, Lynch always looked at the swing from the perspective of the accomplished player.   The lessons learned would one day be distilled for higher handicappers—teaching academies such as IIG are designed, after all, to sprinkle the magical elixir onto pupils willing to pay for the chance to improve—but the focus was always on elite players.  Even today, Lynch organizes his schedule around visits to tournaments and championships during the season so he’s available when his players need fine-tuning, or perhaps a pep talk.

Lynch found talented young players were a natural receptacle for his method, but it still took time for the results to appear.  “You can quickly identify talent,” Lynch says, “but it’s a long journey to success.”  As the Head Coach at the Victorian Institute of Sport’s golf program at Melbourne’s Olympic Park, Lynch produced five players good enough to win as professionals.  He knew instinctively what Malcolm Gladwell’s Outliers points out–that it takes approximately 10,000 hours to master a skill, and no matter how naturally gifted a person may be, without the practice, no mastery is possible.  Winning requires not just talent but also persistence—“they need to have the drive,” as Lynch says.

Lynch thinks there is another reason for the exceptional number of outstanding Australia pros—after all, the continent has only 22.5 million people, or fewer than the inhabitants of Texas—and that’s the expectation that young players will fend for themselves.  “18 year olds in Australia were expected to organize their own travel plans,” he said.  “I think they learn responsibility at a young age, while perhaps American players are a bit coddled.”  Aussies in general have a matter-of-fact take on the world, and Lynch exudes the practical competence of his culture.

Americans, he thinks, have another advantage in golf, beyond the abundance of courses, the profusion of college scholarships and the richness of the professional tours.  “Americans are easier to teach across the board because they almost all have some background in baseball or softball, and a good golf swing is almost identical to the perfect motion of a baseball swing.”

[Jeff Ritter of The A Position makes the same point comparing Tiger Woods’ current imperfect (“stuck”) swing with the classic fluidity of Sam Snead’s swing.  Jeff describes it as “a baseball mentality: arms behind, arms in front, arms behind.”

To look at what Jeff ‘s analysis, go to:http://rittergolf.com/golf/golf/instruction/94/take-on-tiger]

But with the great players, he works not just on mechanics or technical issues, but on counseling players on the emotional challenges they face.  Geoff Ogilvy, for example, who seems so laid-back with his lanky stride and languid swing, “was very volatile, even in his early days as a pro.  He tried to be more relaxed when he played and couldn’t break 80.  Even the word ‘relax’  is a bad one for a pro—it doesn’t reflect a competitive mindset.  Geoff was volatile because he’s such a fierce competitor.  And volatility is also not the same as anger—that’s a different emotion from the fury players who have a great competitive drive like Geoff feel.  But Geoff has learned through a lot of thought and discipline to set an even keel during competition.  And he’s a very cerebral guy—there’s a lot more going on underneath than what appears on the outside.”

Lynch says he always links the technical to the emotional side of the game—a player can’t succeed utilizing only one part of the equation, so when he’s working with players he keeps the emotional side as well as the technical side in mind.  When he was working with Atwal in Boise, for example, he focused almost entirely on a very small adjustment in the grip, and for the rest encouraged an easy tempo.  His tone was soothing and not a hint of criticism was ever sounded.

Lynch thinks players who grew up away from golf’s mainstream, like Atwal, may play more with feel than do players who started formal instruction at a very early age.  Atwal agrees.  He learned the game in a club rich with tradition (and one of the oldest golf clubs in the world), Royal Calcutta, which has produced some of India’s best professionals.  In addition to Arjun, two other players from the Royal are full-time touring professionals. Still, the number of competitions, coaches and academies in India is small compared to what players in other countries enjoy.  Atwal himself moved to the US as a teenager to pursue his golf career.  He’s had several good finishes this year, including tied seventh at the Byron Nelson and tied 17th at the Texas Open.

Lynch believes “if you get too involved in mechanics, you lose feel and touch.”  And the golfer has to learn to let instincts take over, to trust the feel.  It’s the same for a full shot or for a pitch, a chip or a putt.  Instinct rather than calculation has to guide the execution of the shot.   But one final theoretical question bothered me—where, I asked, does the short game stop and the full shot take over?  What’s the definition of “short game”?

Lynch laughed.  “I guess you could say that any shot with a wedge that’s less than a full swing defines the outer range of the short game.  But if you’re playing in the wind and you need to hit a six-iron an eight-iron distance, that’s ‘short-game like.’”

This response sums up Lynch’s approach to golf—thoughtful and specific and well-considered, but neither reverential, stuffy nor hidebound.  Dale Lynch has discovered a practical and sensible but comprehensive method of golf instruction, but conveys it without a hint of pretense—in other words, echt-Aussie.

2 Responses to “Dale Lynch–at Home on the Range”