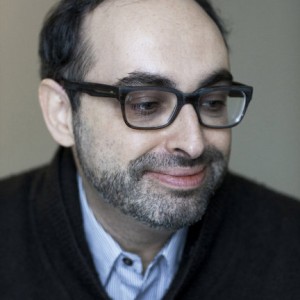 So I don’t risk burying my recommendation where an inattentive reader might miss it, let me say right upfront: Read this book — it’s great.

An early entry in the diary of inept life-extension salesman Lenny Abramov notes that he has always regarded his parents’ native tongue, Russian, “as the language of cunning acquiescence.” Gary Shteyngart’s hilarious dystopian novel, “Super Sad True Love Story,” is also sly and compliant, but like all great comedies, it is erected inside a scaffolding of sorrow, as the title promises.

Lenny is desperate to qualify for the “dechronification treatments” that he’s supposed to be selling to High Net Worth Individuals (HNWIs) on behalf of his company, Post-Human Services. He’s a sucker for the immortality pitch himself, even if he’s not signing up many customers. The social worker he once saw, he writes, was “unable to cure me of my fear of nonexistence.”

After a meeting with the tiny, enticing Eunice Park in Rome inspires him to keep a diary, Lenny is delirious with hope, the annihilating force propelling his life and fueling his observations. But it’s the contrast between Lenny’s tender soliloquies as he pursues his love for Eunice and the brutal banalities of life unplugged from meaning that give “Super Sad True Love Story” its satiric clout. For example, Lenny and Eunice go shopping at the “United Nations Retail Corridor.” Eunice normally shops online. The U.N. has long since been made redundant by Chinese power and puerile Europe’s acquiescence.

“These thrifty Retail Corridors,” Lenny writes, “were supposed to mimic North African bazaars of yore, their only purpose a quick exchange of goods and services, minus the plangent cries of the sellers and the whiffs of tangerine sweat.”

The future Shteyngart conceives here — China as the world’s sole superpower, a bankrupt, frightened U.S. bogged down in a war in Venezuela and ruled by an “American Restoration Authority” controlled in turn by the “Bipartisan Party,” its citizens absorbed in the broadcasts of “FoxLibertyUltra” as National Guard troops patrol the streets, occasionally shooting a “Low Net Worth Individual” — has a chilling plausibility, which makes the jokes funnier and the gloom even murkier.

People no longer speak, they “verbal.” Texting is a college major. (And you can attend one of the merged global universities, such as “Brown-Yonsei” or “Reed-Fudan,” a sly homage to Portland, where Lenny’s company also has a satellite office of its R&D department.) You can buy a business-class seat on the subway in New York. Books, as obsolete as clay tablets and slightly repulsive, “smell like wet socks.” Boys aspire to work in Credit, girls in Retail, creative types of both sexes in Media. Pornography guides sexual relations. The U.S. government, responding to prompts from the world’s most powerful man, the Chinese Central Banker, is pushing its citizens to consume more. It’s the Bush years on steroids, the collapse the Obamites hope they have avoided.

The structure of the novel is simple and effective. Shteyngart interrupts Lenny’s diary to inject a series of messages written by and to Lenny’s beloved, Eunice, sent over the GlobalTeens network (“teening”) in a kind of truncated code that Shteyngart nails. This device adds new points of view, so that Lenny’s suspect consciousness doesn’t have complete responsibility for the narrative. Here we learn about Eunice’s abusive podiatrist dad, for example, and her self-effacing mother, meek to the point of obliteration.

Shteyngart is a droll Kafka — not so enigmatic, perhaps, but just as inimitable, and much, much funnier. He has a genius for composing the perfect, concise, illuminating phrase: “the sickening contralto of middle-class people screaming.” Or “the pedestrian awkwardness of the born Southern Californian.”

Creating an alternative world inhabited by characters we can care about isn’t easy. Katherine Dunn did it in “Geek Love.” But even a writer as great as Philip Roth couldn’t quite manage it in “The Plot Against America,” where the conceit of the story can’t conceal itself, even with Roth using all of his powers to push the narrative forward. The artifice defeats the art. Yet Shteyngart, without resorting to pyrotechnics or hyperbole, insinuates his readers into an original, engaging and frightening world, at once foreign and familiar. I loved this novel.

On August 4th I went to a reading by Shteyngart at Powell’s Books in Portland.   It was wonderfully entertaining in a way most author’s readings are not.   In the Q & A after the reading, someone asked Shteyngart if he’d even done stand-up, and it was certainly a reasonable question, given how much he made the audience laugh.  He did a good reading, but the give and take was brilliant–engaged, enthusiastic, and really funny.  His wit was also, like Super Sad True Love Story, layered with a kind of sublimated anger and dismay, giving it bite, but delivered with a soothing and gentle modesty.   He listened to the questions, spoke directly to his interlocutors, and had the audience in the palm of his hand.  If you ever get a chance to hear him, go!  In the meanwhile, for another taste of his humor, check out

One Response to ““Super Sad True Love Story”: A Review (and a Note)”