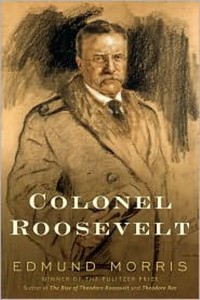 Sifting through the ephemera of youth for the kernel of a great man’s mature persona can be exhilarating for a biographer who’s not in a hurry, and as Edmund Morris demonstrated in “The Rise of Theodore Roosevelt,” the celebrated first volume of his trilogy about TR, he’s a patient man. Apart from an interlude to write “Dutch,” his controversial examination of the life of Ronald Reagan, the president who least resembled Roosevelt, and a later detour to compose a biography of Beethoven, Morris has spent the better part of four decades immersed in the world of America’s most interesting president. (Morris cites an early TR biographer gushing over Roosevelt “as ‘the most interesting American’ who ever lived” — also a plausible claim.)

“The Rise” was a bracing read, as we witnessed young Teddy struggle against his infirmities, discover his gifts and ascend through force of will (and aided, of course, by the assassination of William McKinley) to the highest office in the land.  He was the youngest man ever to assume the presidency.   The second volume, “Theodore Rex,” examined Roosevelt’s years in the White House, when his power and cunning were in full flower. Now, with the final volume, “Colonel Roosevelt,” Morris is obliged to narrate TR’s decline, replete with episodes of regret, depression and grief. Given the architecture of Roosevelt’s robust personality — his stamina, his courage, his self-confidence, his willpower and his brute intelligence — we don’t anticipate a tranquil exodus from power, but expect instead a clamoring, fist-clinching resistance to marginality. As always in his life, Roosevelt resisted any easy way out.

“Colonel Roosevelt” begins with an account of the yearlong safari Roosevelt embarked on in east Africa soon after leaving office. Typically Rooseveltian in scale and ambition, the expedition combined TR’s lust for the kill with a genuine desire to learn about the natural history of the animals he was dispatching in abundance, many slated for delivery to the Smithsonian. His son Kermit accompanied him, part of a large retinue of guides, porters, cooks and gun bearers. Andrew Carnegie underwrote the safari, but the Colonel’s regular dispatches to Scribner’s Magazine helped defray costs and would generate income to support his large family when published in book form.

Although he was born into a well-to-do family, TR was always a breadwinner, and his main source of earnings was from writing.  He wrote, Morris observes, as he talked — “super abundantly, always interestingly, with clarity and total recall.” But “the power of his prose comes from its realism.”

Faced with the demands of an endless stream of articles, speeches and books, TR never missed a deadline, even when he was ill or in the midst of a fierce political struggle. His theoretical acuity may not have risen to the heights of Jefferson’s or Madison’s, but his literary output was matchless.

In contrast to the exuberance propelling his account of Roosevelt’s rise to power, Morris’ narrative of TR’s last significant foray into electoral politics, the failed presidential campaign of 1912, is, if not perfunctory, tedious. The singular qualities of that campaign — TR breaking with tradition to seek a third term, for example — are interesting, but the endless political maneuvering Morris reports lacks vitality. Roosevelt ultimately split the Republican vote by agreeing to stand as the candidate of the Progressive, or Bull Moose, Party, depriving his handpicked but disappointing successor, William Howard Taft, of a second term and assuring the election of only the second Democrat to the presidency since the Civil War, Woodrow Wilson.

Morris’ account of TR’s final outdoor adventure, undertaken after the debacle of the 1912 election, also lacks the narrative urgency animating most of the trilogy. The subject of Candice Millard’s 2005 “The River of Doubt: Theodore Roosevelt’s Darkest Journey,” a book Morris is gracious in praising, the expedition through Amazonia nearly killed TR. Morris surmises that the illnesses provoked and the injuries suffered on this trip contributed to his premature death.

Once Morris begins to reckon with TR’s final years, “Colonel Roosevelt” sweeps forward with majesty and grace. The concluding chapters are magnificent, with Morris summoning the full array of his narrative gifts. TR faces not only his final illness with courage and fortitude, but endures the loss of his youngest son in combat in a war TR had vigorously supported. All four Roosevelt sons served with distinction in World War I, driven by their father’s example and exhortations.

TR was a man whose belief in duty and sacrifice did not stop on his own doorstep. Morris leaves no doubt that while TR’s otherworldly self-control kept him in charge of his emotions when he heard the news of Quentin’s death, his suffering was deep and abiding — as any father’s would be. His accomplishments separated him from all other men, but his sorrows signaled his simple humanity. Along with the accumulation of parasites and the inventory of illnesses and injuries that had accompanied his strenuous life, the grief of losing his youngest son, Morris writes, hastened TR’s death.

“Quentin had died so young without building an adult life away from home, that Sagamore Hill was still unbearably infused with his personality,” Morris observes. Despite having a great deal in common with his father, Quentin was not drawn to politics. “Quentin’s energy,” Morris writes, with the analytical concision characteristic of his narrative style, “had been explosive rather than propulsive.”

Although inevitably uneven, given the jumbled quality of TR’s last years, when he occupied no office and searched for an elusive all-consuming purpose that might compare, somehow, to the helmsman’s role in Washington, “Colonel Roosevelt” is a book that nonetheless celebrates its subject even as it honors him by refusing to indulge in hero worship. TR was never venal or cynical, and while he had plenty of faults, he was true to himself to an almost pathological degree. Morris’ beautifully written trilogy persuades us once again how fortunate America has been in the leaders its chaotic, impractical system has somehow managed occasionally to yield.