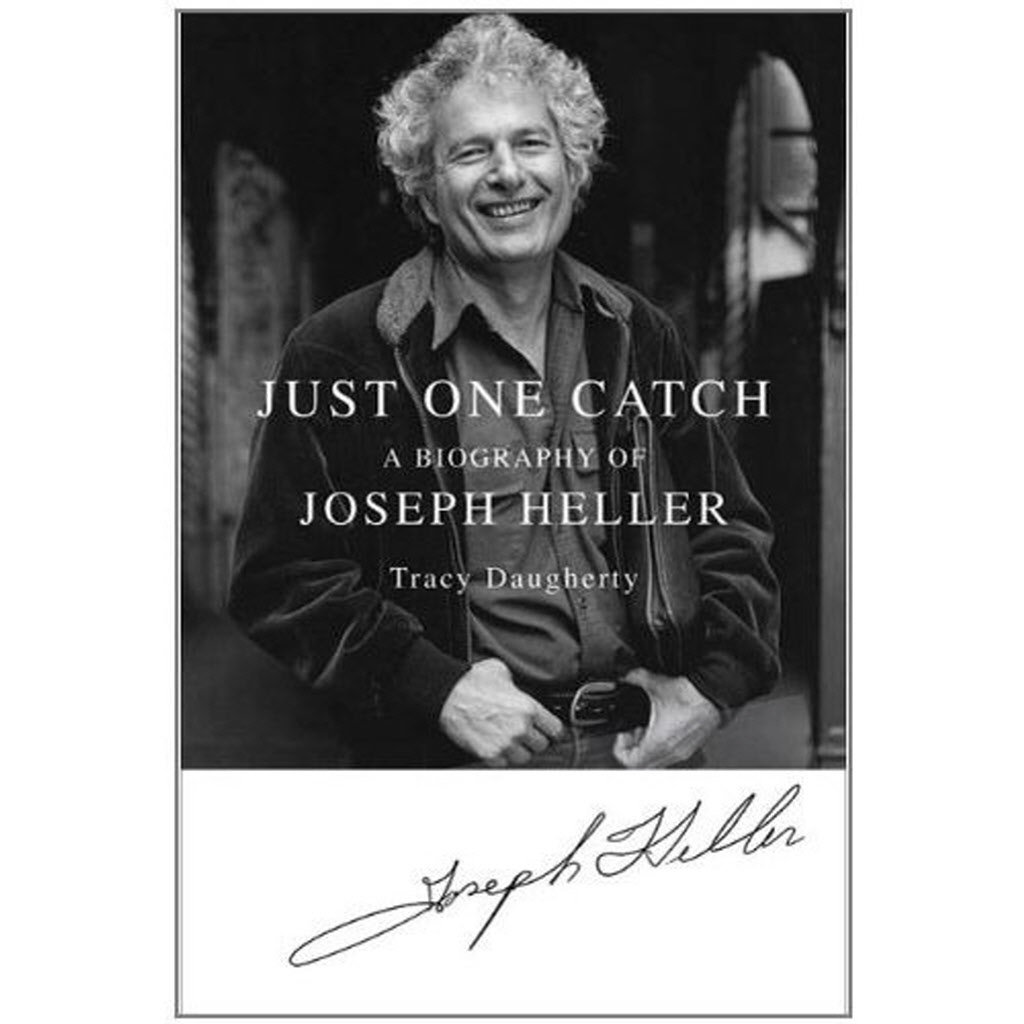 Joseph Heller assembled the manuscript for Catch-22 from a collection of notes on index cards.   The novel began to spring forth, Heller would recall, “when suddenly this line came to me: ‘It was love at first sight.  The first time he saw the chaplain, Someone fell madly in love with him.’”   He jotted it down.

Immediately, Heller remembered, “the book began to evolve clearly in my mind….All this took place within an hour and a half.”  “Someone,” of course, was Yossarian, and as Tracy Daugherty writes in his biography of Heller, Just One Catch, all of Heller’s novels would be similarly inspired by the revelation of a single sentence.

The curious saga of Catch-22’s creation, from this moment of germination to its publication seven years later to its enduring status as a best-seller and countercultural icon, provides a needed jolt of energy to Just One Catch. The narrative of Heller’s early years in Just One Catch sticks pretty close to the account in Heller’s memoir, Now and Then.   But the chronology is tricked up in a vaguely Hellerian fashion, padded with flashbacks and foreshadowing, a cumbersome approach in a biography.

Heller wrote one to three pages a night, Daugherty notes, once he was under contract for the novel.  Those index cards, shuffled and reassembled, provided the scaffolding for handwritten passages on yellow legal pads.    Heller’s agent, Candida Donadio, a pioneer in getting publishing houses to bid for manuscripts, got Heller a $750 advance, with another $750 due when the manuscript was delivered.  (In 1987, Heller reportedly signed a two book deal for four million.)

Despite not having access to Heller, who died in 1999, Daugherty was not hurting for material.  The drafts of Catch-22 are at Brandeis, while most of the Heller archive is at the University of South Carolina.  Heller, who struggled with money after a long illness and an ugly divorce in the 1980s, sold his papers two years before his death.   “When a dealer offered the Joseph Heller Papers to USC in 1997,” the University “grabbed them for $135,000—which proved to be a steal.”    (Why?  “Heller’s marked copy of Catch-22” by itself sold for $105,160 in 2002.)

“Joe was working on at least nine different drafts” of Catch-22, Daugherty discovered, “both handwritten and typed, often cutting and pasting sections from one draft into another….”  There are more than 150,000 pages in the Heller archive, as well as at least twelve books about Heller cited by Daugherty in his bibliography.

Heller was working full time on Madison Avenue, a married father of two, when he started Catch-22, a book at first called Catch 18.  Heller’s editor, Robert Gottlieb, a major collaborator through most of his writing life, hit on the right number for the “catch” after they learned that Leon Uris was about to publish a novel called Mila 18.

Working in advertising “helped me write Catch-22,” Heller said.  “I felt there was a similarity between writing Catch-22 and the work I was called upon to do in the daytime.”

Heller was, in his own words, “seek[ing] a way of telling a story that [was] different from the mere narration of the events of history.   Putting on his critic’s cap, Daugherty writes that Heller’s approach “highlighted structure (music, rhythm, repetition), violated chronology, and played with language, making puns and setting up sophisticated verbal ironies (swift shifts in register from the comic to the tragic).”

Daugherty writes that Heller’s “favorite narrative method” was “the retrospective elegy,” and observes that someone important dies in the penultimate chapter of every Heller novel.

A professor of literature at Oregon State, Daugherty is an accomplished fiction writer.  Hiding Man, his 2009 biography of his teacher and friend, Donald Barthelme, was a critical and commercial success.   Heller, of course, is a much better-known writer than Barthelme was, although as Daugherty points out, the runaway success of Catch-22 was a burden on Heller for the rest of his career.   As one friend noted, Heller had hit .400 his rookie year.  How do you top that?   Daugherty’s exploration of Heller’s handling of success is a leitmotif in Just One Catch.

Many critics believed Heller never matched the brio and brilliance of Catch 22, but plenty of writers—and Heller counted many writers among his friends—thought his gifts were evident in everything he wrote.   The follow-up to Catch 22, Something Happened, (not its sequel, which would be called Closing Time and would not be published until 1994) was a best-seller.   Several critics savaged Something Happened, but Irwin Shaw, who according to Daugherty had been an early inspiration to Heller, told him it was “a great book.  A masterpiece.”

Something Happened may have pleased most critics, but it was a burden to his family, especially his first wife, who “hated” the book.  “She was embarrassed and disconcerted by the portrait of a narcissistic, fretful man whose love for his wife and children is balanced by equal bouts of revulsion, and who engages in serial adultery to take the edge off his fears of failure.”  [page 329]

Those children, Erica and Ted, would both grow up to be writers.  Erica Heller has a new memoir out this month, which makes her willingness to have also served as a principal source for Just One Catch seem especially generous.

Although of the same generation of writers as Norman Mailer and James Jones, whose WW II novels were, Daugherty observes, written in the manner of pre-war fiction, Heller wrote a novel that looked forward in both technique and sensibility while glancing backwards for its setting.  Catch-22 is enduringly influential.  So perhaps it’s no surprise that as I am writing this review, Catch-22 rates a more than respectable 558 on Amazon.  Mailer’s The Naked and the Dead, the first novel to hit the post WWII bestseller lists, is at 28,906.   Jones’ From Here to Eternity, which Heller thought was the best WWII novel, is a disheartening 185,916.