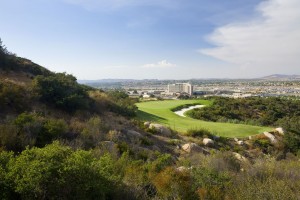 Forget the Scots.  Golf was invented in America.  There’s a petroglyph at Chaco Canyon showing Kokopelli holding a niblick. The descendants of the Ancestral Puebloans have now run amok with the sport, and tribal golf is about as good as it gets all across the Golden State.

Journey makes no pretense about being a walking-friendly course. It sprawls across the hills of southern Temecula about as freely as houses crawl across the rest of the valley.  And if the golf cart climbs some of the inclines at a rush-hour-in-Trafficula pace, it’s worth the wait.  In Indian lore, Coyote was the trickster, and in the world of golf-course crafting, 80-something-year-old Arthur Hills plays the role with relish. Sinkholes in greens; a really long or a really short part 4 that’s perfect for driver, or perhaps not; the chance to hit to left, center or right even if you can’t control one to the exclusion of the others—Journey makes you think, which ain’t good for a lot of us. Journey makes your grin. 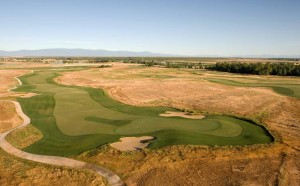 Ripples and rolls of Sevillano--#18 here.

A links course cannot by definition exist up where the Central Valley is about to give way to the Cascades and Siskiyous.  Well, there’s no Santa either and that hasn’t dampened holiday spirits. Links or not, Sevillano is the deal, and absent haggis, sheep-made bunkers, multiple centuries of history, men in skirts and an adjoining tidal flat, there’s still a lot of the old game up north next to I-5. Blind shots abound, enough to make the tour guys order extra cheese, if they played here. There are tons of shortcuts, many delightfully foolhardy. And the whole track is lay-of-the-land as it rolls out and on and on and out.  But just to be certain this is still the US of A and not Alba, the middle tees run to 6,800-plus yards. (The designer of record is John Daly, you see.) There’s now more than the obligatory stop at the Olive Pit to that drive to Oregon.

Some number of years ago a wildfire threatened Barona Resort & Casino, even burning into the margins of the golf course. It was a harbinger. The course is indeed hot, and despite the chatter of a certain bazillionaire, Barona is the best public-play course in So Cal; and to think it’s not even at the beach. Inland San Diego County is a tumble of granite outcroppings, native oaks, meadows cleared and natural, springs, so in other words a place for some magic. Refreshingly, it’s a course that doesn’t apologize for brawn, letting players air it out with their microwave-sized drivers … and then hoping like hell they can channel Crenshaw on the massive ice rinks the locals call greens; don’t sweat a three-jack, it is possible to four putt at Barona and not necessarily be a bad putter. What?  You think the odds are better over there in the casino? 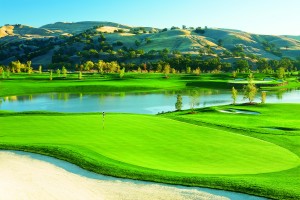 Yocha-De-He takes as comfortably to the land as a native oak.

Getting to Cache Creek Casino Resort in Brooks is a good bit of the fun, the drive in from Sacto airport is just so California—city giving way to miles of farmland of gold and green, orchard and grain, the brown fallow of the next bounty, which in turn cedes to crumpled foothills of oak and a meandering valley of stream and sycamore. The balance of the reward is at Yocha, itself, which occupies one of those perfect CA creases in the land. There are several measures to a course done right, uniqueness in the par 3s, 4s and 5s, and the ability to remember every hole and every shot during the post-round debriefing among the most telltale; Yocha scores. And it’s a perfect walk.  Quintessential golf.