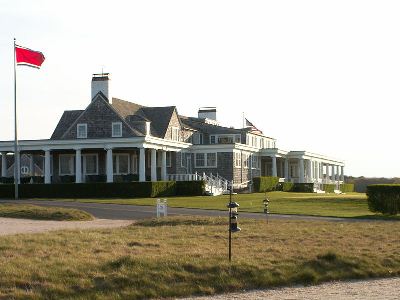 You've seen the famous clubhouse at Shinnecock Hills on TV during the US Open - now see it from the course! Photo: Wikipedia

You know the legends of Shinnecock Hills, such as the time Corey Pavin dramatically won the U.S. Open with a miraculous fairway wood to the final green. That is just one highlight of the 122-year old course, which has hosted the nation’s most prestigious golf tournament four times. It was home to the second U.S. Open ever in 1896, and will be the venue for our national championship again in 2018.

Both Golf Magazine and Golf Digest currently rank Long Island’s Shinnecock as the 6th best course, public or private. That puts it ahead of the most famous golf courses names on earth, including Bandon and Pacific Dunes, Pebble Beach, Pinehurst – and every other U.S. Open venue ever. It also bests every British Open venue except St. Andrews Old Course, the world’s oldest, and these rankings also put it ahead of every other course in Scotland or Britain.

But, you say, this greatness is all moot:  Shinnecock Hills is very private, like its closely ranked brethren Pine Valley, Cypress Point and Augusta National, the top four rated courses in the nation. If you do not have a friend who is a member, you cannot play it. That is true – except for one day each year.

Monday, May 20, will be the Fourth Annual Project A.L.S. Golf Classic at Shinnecock Hills Golf Club. It is the only charity event held all year at the fabled course, raising money for a horrific disease uniquely associated with golf (and of course with baseball). When Tom Watson’s longtime caddie Bruce Edwards was diagnosed with A.L.S., also known as Lou Gehrig’s disease, Watson was instrumental in creating ALS TDI Golf to raise funds for research. PGA Tour player Jeff Julian had his dream cut short on Tour when he fell victim to the disease at in 2004 at age 42, three years after being diagnosed with ALS.

The silver lining here is that golf fans have the unique chance to support a truly worthy charitable cause while having one of the finest golf experiences on earth. I’ve had the pleasure of playing Shinnecock Hills twice, and it is indeed a rare treat, even for someone in my position as a longtime golf travel writer who has played top courses all over the world.

Here’s the deal: There are only 20 foursomes in the field at $10,000 each, or $2,500 per player. I f you don’t have three friends who want in, individual spots are also offered with no markup, for $2,500. All include brunch, golf, caddie fees (not tips), cocktail reception afterwards and awards ceremony.

Because the event is so small, tickets are not sold online. You can contact Project ALS staffer Erin Fleming at erin@projectals.org or 212-420-7382.