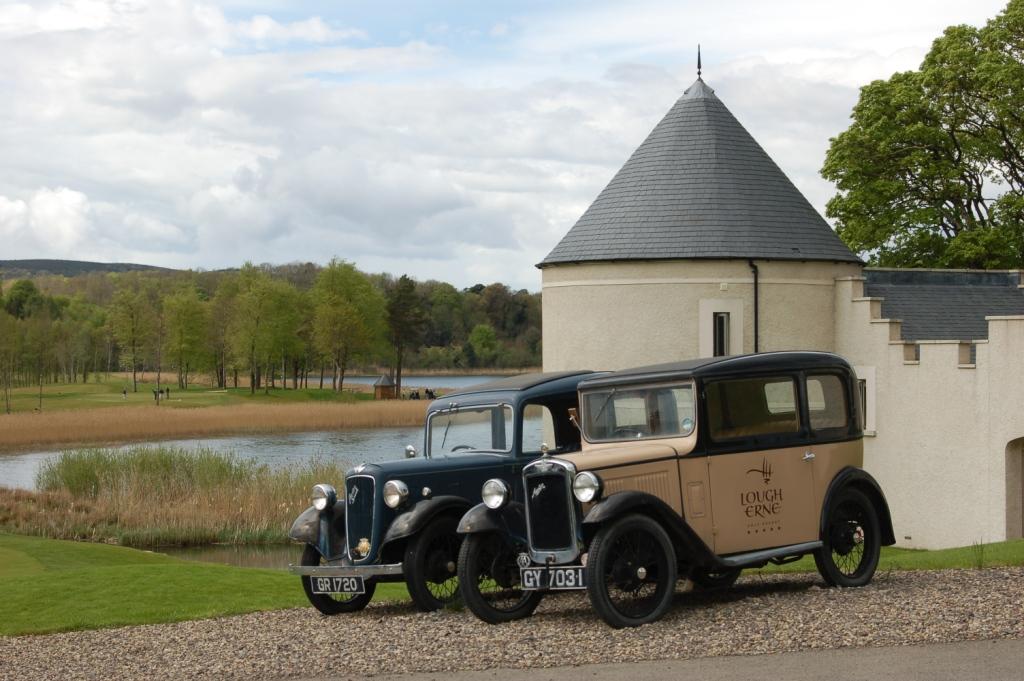 From rooms to golf to food to decor, Northern Ireland's new Lough Erne is one classy golf resort.

When Irish teen golf phenom (he’s now 20) Rory McIlroy stunned the world this past weekend by becoming the second youngest player in history (after Tiger of course) to win on the PGA Tour, a lot of Americans had the same reaction: Who is he?

For years McIlroy has been the next big thing as far as the Irish were concerned, but in the past year or so there have been some concerns abut his confidence. I think he pretty much laid that talk to rest with one of the sport’s most incredible comebacks: after making an eagle just to exactly make the cut, leaving him in last place after Friday, he proceeded to shoot the low tournament rounds both Saturday and Sunday, including a new course record, the go from worst to first – by four strokes – over just 36 holes.

Because of this remarkable effort, I am interrupting the flow of my China golf series to jump into Northern Ireland, which was to be my next series.

Why the change? Because on Saturday, while Rory was making history here in the States, I was in the Clubhouse at Lough Erne, his home club, having a cocktail with his parents, after having played the Nick Faldo design he calls home. The timing seems too serendipitous to wait, so here is the skinny on this new, but largely unknown luxury golf resort. It is also notable that very few new golf resorts of note are opening anywhere in the world right now, but it has been several years since Ireland got one. That alone makes Lough Erne news. 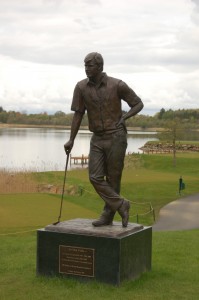 Apparently Sir Nick Faldo did not want visitors to forget who designed the Lough Erne course. 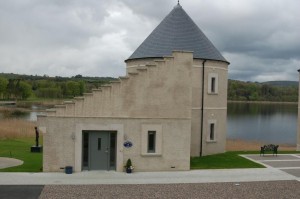 Swank lodging options for golfers visiting the resort include these lakeside villas, each containing two lockable suite and a lareg shared common area with all the luxury fixtures and bells and whistles.

Lough Erne opened last July and is not even a year old. It debuted fittingly with an exhibition match between McIlroy and that other Irish golfer you might have heard of, Padraig Harrington. There is a second nondescript 40-year old course (Castle Hume) that is part of the resort, but the entire Lough Erne section (Lough means lake, like Loch in Scotland), including the posh clubhouse, luxury hotel and rooms scattered in little castle like villas around the property, is all new – and all good.

I have only seen two other Faldo courses before, and I liked them both, and this makes three. The one problem with Lough Erne is that it is inland, and for the most part I don’t go, or recommend going, to Ireland (or Scotland) to play inland courses, with very few exceptions (Adare Manor, Royal Belfast). Lough Erne is worth this exception. It is beautiful, jaw dropper at every turn, starting with a classic parkland section, featuring lots of water exposure, tons of beautiful cut stone bulkheading, and a middle section that climbs into high, barren fields and overlooks the lake and the rest of the course with a pronounced links feel, even though inland. Then it returns to the lake for a series of dramatic finishing holes including, oddly, an all carry long par-3 over the lake for eighteen. I’ve only played one other course (Greenbrier, WV) with a par-3 eighteenth, but it works, coming after a short and watery risk reward par-4 for a true gambler’s finish. 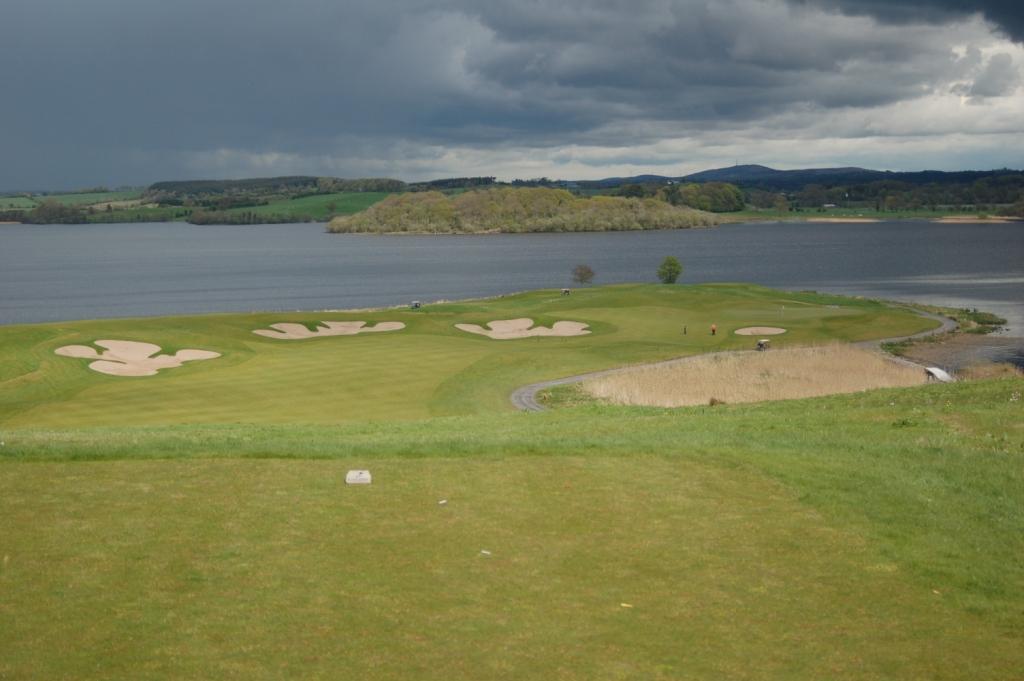 The highly elevated middle section of the course returns to the large lake (Lough) with this dramatic and potentially drivable par-4.

Lough Erne is in Northern Ireland’s Enniskillen, within reasonable (45-90) minute range of some of the great but lesser known links courses of Counties Sligo and Donegal, everything from Nairn to Ballyliffin, and you can get to Royal Portrush in under two. The bottom line is that you should go to Ireland to play links golf, but there is plenty of it around these parts, and this new course is well worth a stop, and much different than anything else you will see while in Northern Ireland.

I think of it this way: we have courses like this here in the States and you don’t have to go all the way to Ireland to play them. But then again, we go all the way to Scottsdale and Hawaii and Michigan and Florida to play American-style courses, and Lough Erne would be one of the best in any of those places. Also, visitors deserve a bit of an indulgence and there is nothing in Northern Ireland to compare to the posh resorts of the Republic, places like the Lodge at Doonbeg, Adare Manor, Ashford Castle, Dromoland Castle, Ritz Carlton Powerscourt, and so on.

Correction – there was nothing to compare, but now there is Lough Erne. 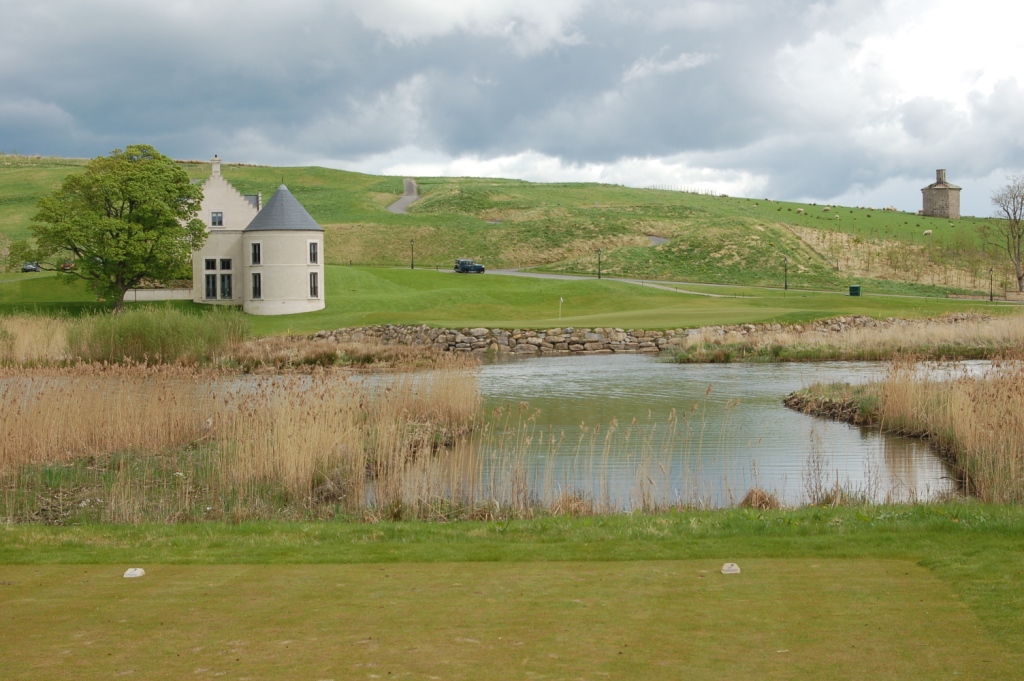 Golfers will find no shortage of water, forced carries, stone bulkheads -- or challenge at Lough Erne.