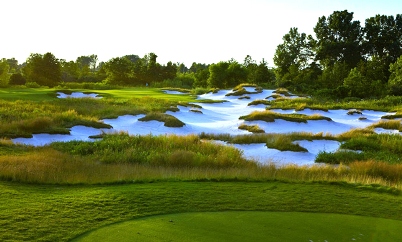 Harbor Shores is a new Jack Nicklaus design on the shore of Lake Michigan between Chicago and Grand Rapids.

The Players Championship is often dubbed “The Fifth Major,” but a better slogan for this past weekend might have been, “The One Nobody Except Matt Kuchar Wanted to Win.” I spent much of the weekend in the sports books of Las Vegas casinos, where even among a fanatical television sports crowd, few could remain interested. A lot more attention was focused on every NBA early round playoff game – even Andy Pettitte’s losing return from retirement in an otherwise meaningless regular season Yankees game raised more interest than the Players.

Like him or not, without Tiger Woods in the hunt it is hard to get people excited about golf, and the other big crowd draw, Phil Mickelson, also remained out of contention, a 1-2 punch that doomed viewer interest in the Players Championship, which will be better remembered for its exceptionally sluggish pace of play and unusual live spectator booing of one of the leaders, Kevin Na, for his exhausting pre-shot routine.

Fortunately, golf fans can look forward to a much more star-filled slate of players next week, when the Senior PGA Championship presented by KitchenAid takes to the fairways of Harbor Shores, Michigan. This is an actual Major, not a “fifth Major.”

The Senior Tour has not especially wowed audiences historically, but I’d like to think that has a good opportunity to change this week. After all, golf ratings are clearly driven by the performances of the big stars, which means the big winners, like Tiger and Phil, with too many tournament wins and Majors to count between them. In this regards, there is no deeper pool of proven winners than on the Champions Tour, especially at one of its Majors. In fact, while the name change from Senior PGA Tour hasn’t exactly gained traction, the Champions Tour label accurately reflects who is actually playing. Look at the stats: in the Players Championship, the biggest purse in golf, the eleven finishers in the Top 10 spots (tie) had a whopping career total of three Major championships between them – all one time winners. In contrast, the Senior PGA Tour is packed full of Hall of Famers like Tom Kite, Fred Couples, Bernhard Langer, Tom Lehman, Mark O’Meara, Curtis Strange and Tom Watson. Watson alone has nearly three times as many Major titles as the Top 11 performers at the Players combined.

Giving the public a chance to watch many of the best golfers in history battle it out over an acclaimed new design on the shores of Lake Michigan by the best living golfer of all, Jack Nicklaus, could be just the shot in the arm the game needs. I certainly hope so.