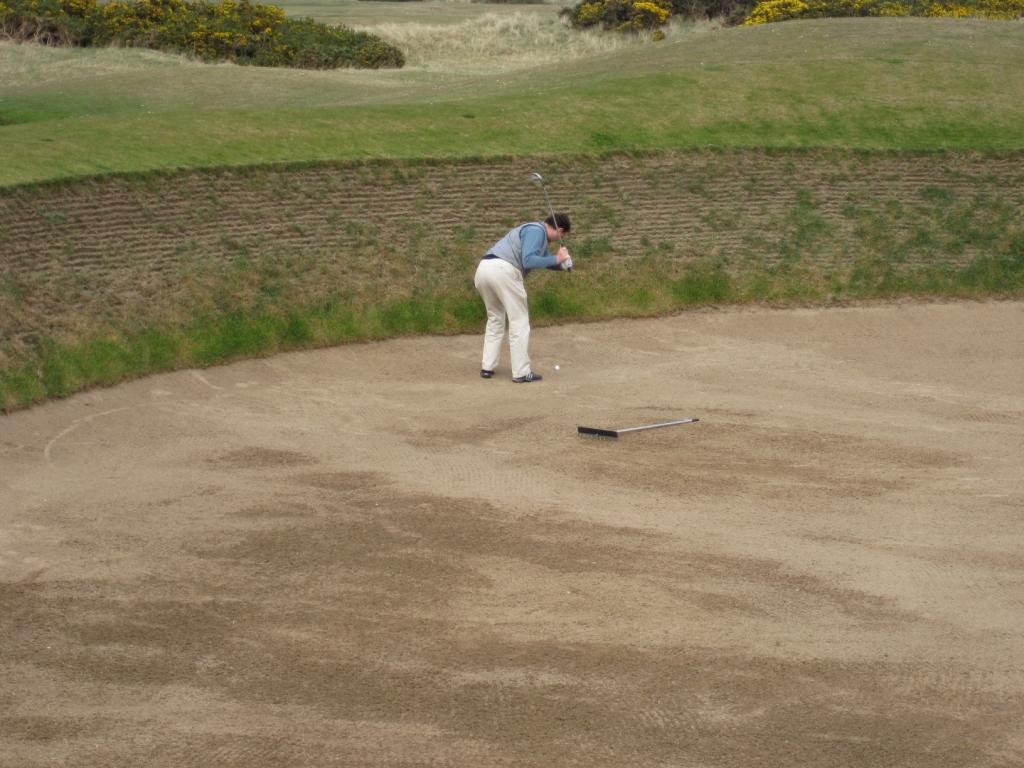 This never would have happened to my friend Pat at Pinehurst. By the way, he managed to catch the infamous "Shell Bunker" twice, on two different holes, out and back.

Okay, the first thing I have to say in this debate is: I wish it had been my idea.

But it wasn’t. The “Tale of the Tape” format used to compare The Home of Golf and The Home of Golf in America comes courtesy of my peer, friend and too-occasional playing partner Brandon Tucker, Senior Writer for WorldGolf.com.

I admit to having a slight bias in all things towards Pinehurst, because one of my relatives, the eminent landscape architect Frederick Law Olmsted (think NYC’s Central Park), designed the village of Pinehurst. Then again, old FLO also did Kohler, WI and the Broodmoor in Colorado Springs, so we’ve got another catfight right here on these shores.

But I digress. Pinehurst is often called “America’s St. Andrew,” and not without good reason. Both towns have golf courses as there physical and spiritual hearts, and both are those very rare places that move even the most casual golfer. They live, breathe and exude golfness, something that no other place does.

When I saw the headline, my immediate thought was, St. Andrews of course. Pinehurst has some excellent courses, but is a bit more of a one hit wonder, with Number Two being by far the main attraction, while locals in St. Andrews favor the New over the Old, the new Castle Course is a fast favorite, and any of these three will stir the hearts of most Americans. 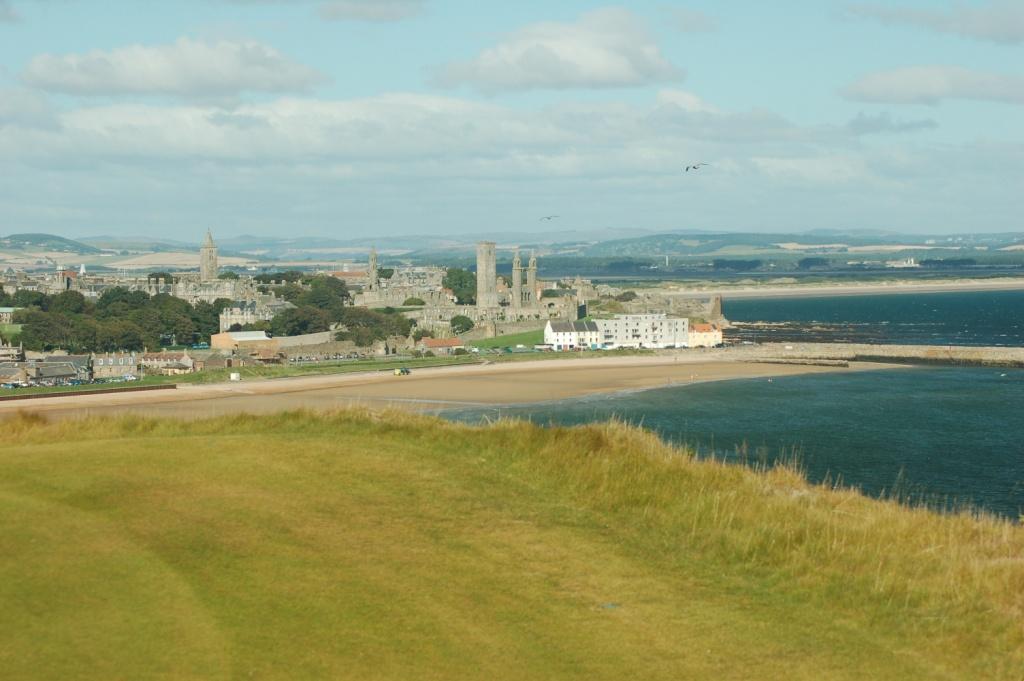 The view of St. Andrews from the new Castle Course is pretty hard to beat.

But then again, only five of the seven at St. Andrews are real courses, and Pinehurst has eight.

Anyway, for more detail, check out Brandon’s article. I learned some things I didn’t know, like that sand was the Road Hole bunker was placed in a bunker at Pinehurst, sort of a blood brothers ceremony for golf.

Since he covers the topic comprehensively, I am only going to chime in with a few very minor points in the argument I think he missed.

In his section comparing nearby courses, he admirably catches the often overlooked – and really awesome – Tobacco Road in Sanford, NC, one of my favorite US layouts. However, in the St. Andrews area, he moves the big stars, Kingsbarns, and both pretty good links courses at the Fairmont St. Andrews to a random category called New Additions. Since  many American visitors immediately proclaim Kingsbarns the best course they ever played, sort of a modern links that upsets some purists but is the ultimate combo of classic and contemporary, and it’s closer to St. Andrews than some of his other Fife choices, I think these have to be included. His result? Too Close to Call. Mine? St. Andrews.

In his becoming a member section, he points out that St. Andrews has a really cool deal for locals who live there permanently. But Pinehurst’s similar and largely unknown deal is still one of the best in the US, with cheaper monthly dues than almost any high end country club (less than one round on Number Two), for all eight courses, plus clubhouses and activities (something St. Andrews residents don’t get). Plus the real estate is shockingly cheap, and you don’t have to actually live in town. He gives this one to the Scots, but the St. Andrews deal is only great for people who actually live in St. Andrews. The Pinehurst deal can be enjoyed by anyone, anywhere. I give it to the Sandhills.

Finally, I have to comment on the pub crawl category. He gives it to St. Andrews, which is a no brainer – it’s not only full of Scottish pubs, it’s a college town! The shock here is not that the Scots win, but that Pinehurst has not tried harder in the past century-plus to at least be competitive. They won’t catch St. Andrews, but they could catch, say, Hilton Head?