With my eyes clearly being distracted by a breaching humpback whale sprouting out of the Pacific Ocean and Instagram moments shooting at me from every angle of the panoramic stretch of coastline fronting the turquoise blue waters at the southernmost tip of Mexico’s stunning Baja Peninsula in Los Cabos, all I was trying to do was concentrate on making a putt. Thanks a lot, Jack!

Yes, that “Golden Bear” Jack. The nicknamed sportsman who segued from a career rewarding him as the greatest golfer of all time, regardless of any diversions, to one of the most prolific golf course designers responsible for 380 courses in 36 countries. The same Jack who, admittedly, first visited the arid desert terrain of Los Cabos in the early sixties with a t-shirt, pair of sandals, swimsuit, $20, stayed for a week and years later was jokingly told by friends as the guy who ruined Cabo. 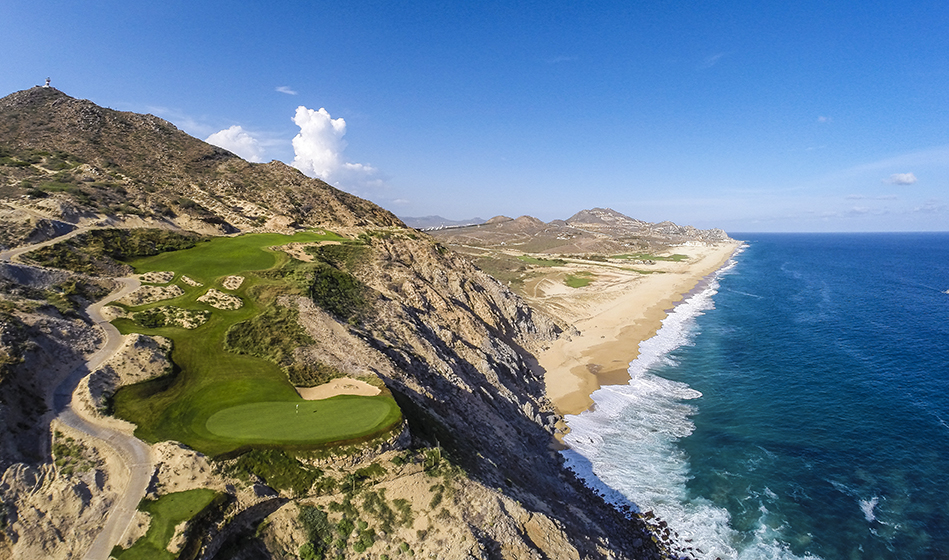 Certainly, it was in reference to Nicklaus’ introduction of golf in this region with his creation of Pamela in 1992, igniting the boom that has turned Los Cabos into a world-class golf destination over the last couple decades and, as such, resulted in a blanket of real estate developments, vacation homes, posh hotels and a boom in tourism. Well, be prepared to fling a bit more blame on the 76-year old, 18-time Major Championship winner due to his sixth and arguably best, yet, design in Los Cabos. Welcome to Quivira, 10 minutes from the town of Cabo San Lucas with its world-class marina and dining.

If any golfer ever needed justification for a trip to Los Cabos, Quivira should prove to be the tipping point. It did for me. And for those who eventually sets eyes on this prime oceanfront property where the Sea of Cortez meets the Pacific Ocean, they will immediately question how anyone, golfer or not, could possibly blame Jack for enhancing his Cabo portfolio after casting more bait to continue luring golfers. Of course, it didn’t hurt with Nicklaus’ penchant for deep-sea fishing and that the course is a mere chip shot away from one of the best fishing aquariums in the world.

“We had to help the golf course emerge from the natural terrain we had to work with,” explained Nicklaus. “I thought it was a very challenging, yet spectacular, piece of property. Much of it is located on the side of a hill and although there were numerous opportunities to place golf holes, we had to find them.

Even though we found them, they still required an awful lot of effort to make certain that they work and that they remain stable.”

Ever since the “man” struck the inaugural tee shot to christen Quivira on December 4, 2014, Nicklaus’ masterpiece has not only proven to work but it immediately skyrocketed to the top of the charts when GOLF Magazine selected Quivira as the Best New International Course of 2014 and voted Nicklaus as the Architect of the Year.

“Quivira is loaded with really, really good golf holes unlike anything else in Cabo or many other places,” says Nicklaus. “I’ve never seen any place that has three holes hanging out over the ocean like this golf course does. They are unbelievable. This is a diverse golf course with inland settings, it’s got desert, it’s got ocean, it’s got rocks, it has a little bit of everything.” 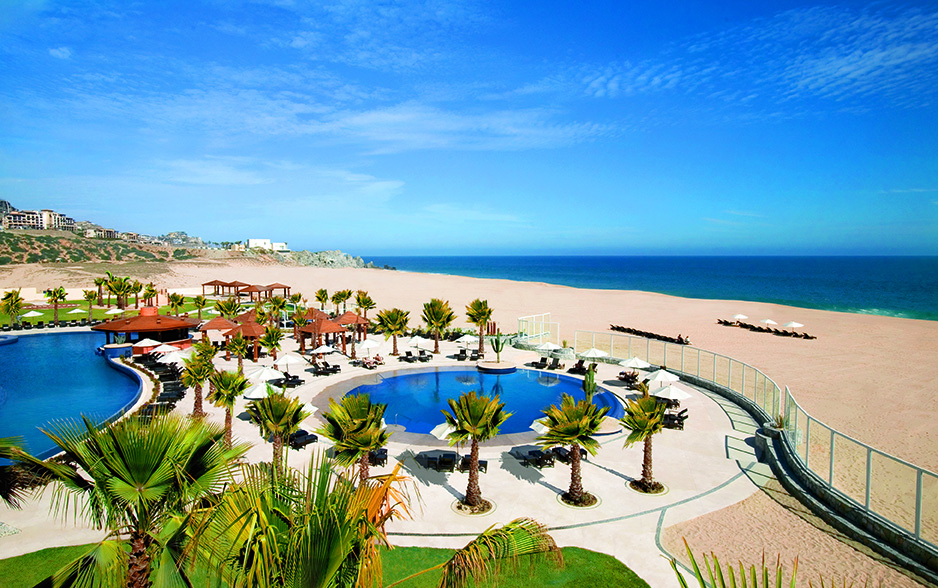 The final putt at the $40 million Quivira, with full views of the Pacific from all 18 holes, finishes where the first drive takes place, at the edge of the ocean but in between you will be treated to an eye-popping rollercoaster round of golf reminiscent to one of the thrill rides in Disneyland that, when I was a child of the 60’s, would have required an “E” ticket.

Preparing to smack my first drive of the day and embark on my joyride through the living sand dunes and desert foothills that characterize the player-friendly Quivira layout, I caught sight of an apparent harmless, yet sinister-looking hawk eyeballing me from its perch atop a 15-foot tall prickly Saguaro cactus. Not the least bit phased by the soaring flight of my golf ball off the tee, the feathered prey stayed its position while I continued on a quest to find my own comfort zone.

The first fairway at the 389-yard, par-4, moves away from the ocean to lead golfers into a quartet of rather ordinary looking holes by Quivira’s standards. But then, hang onto your sombrero! 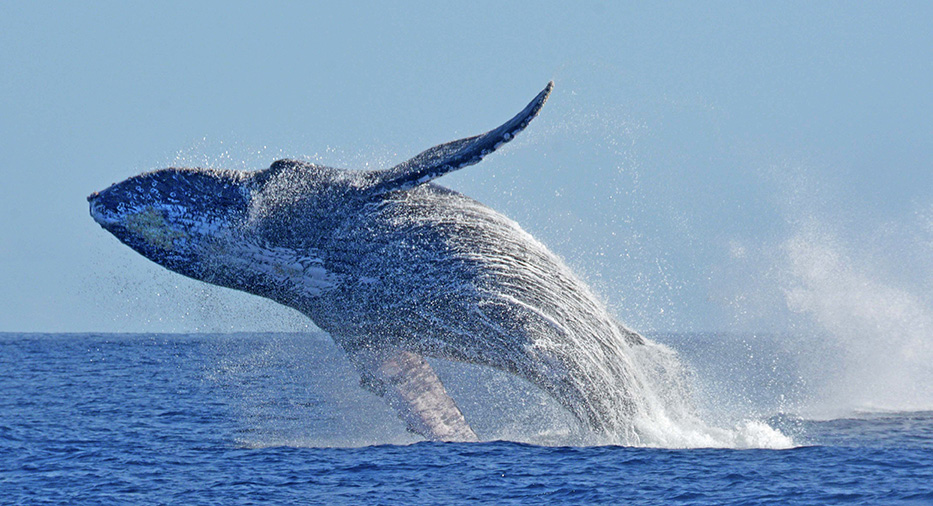 After departing the fourth green, sit back and savor the 1km cart ride past arroyos and a cliff-hanging, switchback ascent up the mountain over a stone bridge to a one-of-a-kind, oceanfront par-4 situated 280 feet above sea level. Following a seemingly never-ending ride to the top and just before turning the corner to feast your eyes on a stunning vista, Quivira offers the first of three hosted comfort stations bearing no resemblance to any drive-thru Taco Bell I’d ever encountered. With a quick recess between swings, golfers can indulge with beverages, snacks and hot food items ranging from hamburger sliders to quesadillas to the popular “Crunchy David,” which is prepared with three flour tortillas, Arrachera (flank steak), Monterey Jack and cheddar cheeses, lettuce, tomato, red onion, olive oil, Cajun seasoning, and salt and pepper.

If you don’t take much pause at the comfort station, the next two holes will be cause to slow the pace. Whether judged controversial or gimmicky, it is undeniable Nicklaus crafted one of the most jaw-dropping holes on the planet at the 310-yard, par-4, fifth and though you may record a visual memory to share the beauty, that will not even come close to personally experiencing the edge-of-the-world tee shot towards a slanted fairway as it tumbles downhill to a transition zone before dropping to a rock-walled, cliff-hanging green 106 feet below the tee box.

Now indoctrinated into the heart of Quivira’s seduction, the adventure doesn’t let up. The subsequent 180-yard, one-shotter sixth is carved into the base of a massive dune and is perched on cliffs high above a secluded beach. From that point, the layout weaves through the desert soil, past another appetizing comfort stop adjacent the ninth tee and eventually, returning to the cliffs and the longest hole on the course, a colossal downhill, double-dogleg, 635-yard, par-5, 12th playing into the same Pacific backdrop as was used for the filming of some scenes from the movie “Troy.”

With the putter barely back in the bag, this cinematic location treats golfers to a spine-tingling sequel at the par-3, 13th demanding a do-or-die shot over an abyss to a challenging minuscule shelf-like green atop a massive pinnacle of sculptured granite rising 150 feet from the beach.

The remaining golf scenes take place away from the ocean until the classic links-style closer that brings you back to sea level by swinging your way down a gently undulating fairway framed on the left by an arroyo and to the right by a grove of mesquite trees, low-rolling dunes and a huge bunker.

Depending what time of year Quivira is played, the inescapable winds will assuredly have an effect on the final card number. With five sets of tees ranging from 7,139 to 4,763 yards, it wasn’t designed to be a back-breaking test of golf but rather an experience catering to the worldwide 98-plus percent of average players. Ultimately, the challenge lies with whoever is setting up the course any given day to make sure certain holes are lengthened or shortened in line with the winds.

“This piece of land can be very hard with the wind and has the potential to just beat you up and we want to do whatever we can to help avoid any negative experience,” says Antonio Reyante Vega, who took over as Quivira’s Director of Golf in April 2015. “With the right amount of course knowledge, it’s not tough once you know where the trouble is and on a windy day, we always recommend for people to play the forward tees.” 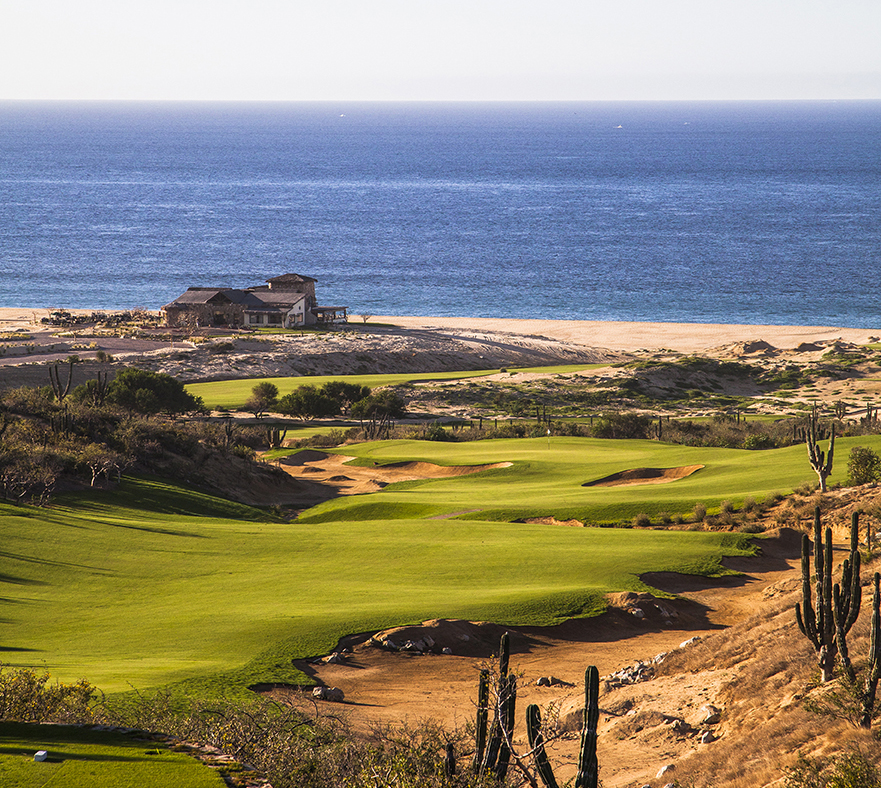 Fortunately, once your round at Quivira is completed and if you’ve managed to eliminate the machismo factor out of the tee selection equation, the only thing you’ll find blowing aside from a humpback spout will be your mind. It’s an experience that keeps beckoning return loops to gain more familiarity to learn how to best play each distinct hole.

As is the case with any freshly planted resort course, it ultimately becomes a target for a barrage of reviews but with the Nicklaus brand linked to Quivira and the rejuvenated popularity in Los Cabos, this property that is part of 1,800-acre master-planned gated community with a collection of vacation ownership villas, condos and homes, along with the all-inclusive, adult-only Pueblo Bonito Pacifica Golf & Spa Resort overlooking a 2.5 mile long private beach, has blossomed into a dream enterprise for developer Ernesto Coppel Kelly. Only 12 years into this 25-year project, the modern-day Renaissance man is far from finished with plans for another golf course and multiple luxury hotels.

Regardless of whether you’ve been visiting Cabo for many years or it’s a first-time trek, Quivira grabs you hook, line and sinker and then realize how you can never blame a guy for doing what he does best.