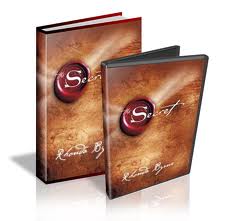 Love it or hate it, the 2006 movie and book entitled “The Secret” still has people talking – often evoking strong feelings. (I assume that you know what it’s about and if you don’t, view or read it and make your own opinion.)

Some fear and feel its message is entirely materialistic while its concepts have opened wonderful doors for thousands. In the past I have provided mixed reviews of the production and book, though mostly positive – and I am biased for I know a few of the important figures in its development and production. The following is a recent Facebook post of May 2014 from a golfing friend together with portions of my reply.

“It’s a shame that the worst book/movie ever written about the Law of Attraction is also the most popular. “The Secret” inspired millions to want for $ millions, a new Porsche, etc. It was a complete commercial misuse of an irrefutable spiritual law.”

Dear _____, I probably agree about The Secret with you in some technical respects, but your use of the word “worst” is a very powerful and polarizing one. First, I believe that the want for $ millions among many has already been there, the Secret didn’t inspire it. Secondly, I have studied the concept since 1961 (though I did not begin to internalize or more importantly emotionalize it until after 2000) and there is absolutely no doubt in my mind that Rhonda Byrne left out the secret to The Secret (step 3 of four and not three steps). Had she exercised her three-step plan, you would still never heard of her – more about that later. As anyone who is familiar with The Law of Attraction knows, this concept is nothing new and has been espoused for more than three thousand years. All Rhonda Byrne did was repackage the concept and simplify it, perhaps too much so from a technical standpoint. Prentice Mulford, William Walker Atkinson, Wallace Wattles, and Robert Collier wrote much about it before Napoleon Hill, Norman Vincent Peale, and dozens of others. That doesn’t make it or her bad, As for being truly a secret, I have never viewed any solid proof that the Rosicrucians did keep The Law of Attraction a secret as the film suggests.

It is always amusing to hear people’s reactions to the movie since it came out in 2006. Actually, if you review it, you will discover that in fact it wasn’t all about greed and materialism though there are many who share your perspective. There were people with relationship issues, career concerns, injuries, cancer, etc. (And to the best of my knowledge, no substantive claims were made.) Time and again, those same folks that call the film materialistic are the same ones focused on materialism in their own lives. Yes, there was the house, the red bike, and improved finances, but that wasn’t everything nor was it the message of some of the prime participants like Lisa Nichols, John Demartini, Michael Beckwith, Denis Waitley, John Gray, Marcie Shimoff, Hale Dwoskin, Fred Alan Wolf, Neale Donald Walsh, or in the original, Jerry and Esther Hicks. And though John Assaraf is associated with “getting the house,” he and his message go well beyond that.

It just so happens that the man responsible for financing and producing The Secret, Bob Rainone, has been a dear friend of mine and was effectively a brother-in-law to me at that time. About your age or just a couple of years older, he is one of the most generous and enlightened people I have met, very modest, and never did the project for the money… he already had made enough on his own. While I, too, am critical of The Secret as being a primer, it’s said primary purpose was to raise the worldwide level of consciousness to The Law of Attraction – something that no one had ever successfully before done – at least to that level. Rhonda and Bob indeed accomplish that. People can now read it in at least 43 different languages and while it has many critics like you, it has succeeded in getting people thinking and talking. How is that bad? What’s more, the folks that were in The Secret – many of whom I know or have met – each of their businesses have expanded at least ten-fold. Most of them are very creditable and The Secret has single-handedly enabled them to spread their positive messages to greater audiences.

My ongoing connection with The Secret is that they asked me to write a spin-off applying the principles to Golf. It was to be written at a very elementary level “for the masses,” but I was allowed to place the missing third step into the text. Anyway, The Secret folks loved my finished product, but decided not to produce any spin-offs and rather focus on their core messages. This gave me license to own it myself and produce a much more extensive product for personal development issues as well as golf. I produced this under a different name (“Golf’s Higher Plane”) and made it relevant for even advanced players and touring professionals as well novice and average golfers. Subsequently, when I added another concept, The Law of Polarity, to The Law of Attraction, amazing things happen. That has now become the basis of my coaching that extends well beyond golf and sports and envelops all of life’s issues. In fact, it has created miracles for me. And remember that The Law of Attraction is only one of many natural laws. I now feel that the Law of Polarity may be more critical and The Law of Attraction is merely a means. 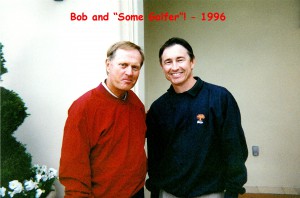 One of the Coach Bob Fagan’s several earlier conversations with golfer Jack Nicklaus.

When I spoke with legendary golfer Jack Nicklaus about my teaching points that combine both The Law of Attraction and The Law of Polarity, he told me that no one, not even a single sports psychologists in picking apart his career, had ever spoken the words I just imparted to him, but I just identified his “fifteenth club,” his secret advantage. We chatted about every great player he competed against from Hogan and Snead, to Watson, Palmer, Trevino, Player, Casper, Mickelson, Norman, and Woods, and it was fun to discuss who “got it” and who didn’t.  We seemed to agree that many could realize more out of life if they did embrace both concepts.

Back to The Secret, while you call The Secret “a shame,” at least it got millions and millions of people to raise their consciousness and even debate it like we are doing. That was really its primary purpose; they never sought to improve on the message, but rather to get people’s attention to it.

If you view The Secret as the tool it was rather than a treatment, maybe you will appreciate its benefit. Each one of us has the freedom to choose to what end we apply it. Is there anything really inherently wrong with thinking and focusing about things that make you happy, whatever you choose them to be? Sadly, however, Rhonda Byrne did leave an important step out – inspired action. You can wish all you want, but unless you commit to inspired action (it can be fun or drudgery), nothing happens. Rhonda Byrne took massive inspired action!

Critics have rightly (in my opinion) pointed to just wishing and hoping for results that The Secret implies creates false expectations and eventually failure, thus disappointing many who didn’t realize or comprehend the “inspired action ingredient.” Sounds obvious, but many became “wish fairies” who became disappointed and disenchanted with the true beauty of the concept Regardless, a level of commitment accompanied by inspired action is necessary for fully leveraging The Law of Attraction – and it can be used by us for whatever motives we desire so just don’t the results. You and I are both responsible for how we use any tool or ability.

The old saying, “Whatever you believe, you are right” applies because your filters and attention will bring you what you focus upon. If you seek good or bad, you will find it. Remember the Indians that didn’t notice and actually couldn’t see Columbus’ ships at first because they had never had any conception of a sailing vessel. The Secret in so many ways has helped us expand ours.

(In my coaching, I address this inspired action, the role of the subconscious, as well as guilt, blame, shame, and fear together with good and bad luck, and timing. The Secret and even many of its featured “teachers” along with the sports psychologists I am familiar with have not addressed these. – Bob Fagan)