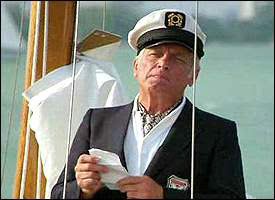 Caddyshack’s Judge Smails is not running your club, but be careful someone worse might be.

Picture this at our mythical private golf club.  (This story is based upon an actual long-established private country club.)

Our club’s physical plant and membership are both aging.  The facility is located in a local community that is no longer conducive to an upscale social or golf club as the area has become increasingly economically challenged.  Housing prices have decreased, incomes are suffering, and the locals don’t play golf, much less have an interest in joining a private golf club.

Our mythical course is a good golf course with charm and a long prestigious history.  It has interesting terrain and nice views, and several entertaining holes, and has been around long enough to earn the term “venerable.”  The membership is a proud one with some new blood, but is nonetheless aging.

The leader of our club has proposed that the golf course needs a facelift, a restoration to its historical roots.  He thinks that course improvements will help add needed members. “If you build it, they will come” our leader crows.  “We will be the best golf course in the area.”   He even envisions the facility as a destination one.  Sounds like a good idea, right?  Think again.  This is where our story turns problematic.

For whatever reason, this leader does not apply usual sound business practices.  At a time and in an area that just happens to have a host of talented golf course designers skilled in renovation, our leadership does not solicit competitive bids. He proposes hiring a relatively unknown man with marginal experience for double the rate of his other more established competitors.  He ignored pleas to consider others whose renovation/restoration work is generally considered very successful.  Can our mythical club afford any extensive makeover, let alone one done at a premium?

Our leader says there is no time to waste and wants to move this project and its approval along as if it were an emergency – “no time to wait, we’ve got to do this now.”

Some wonder aloud if these course changes will cost more to maintain, slow down the rounds, make the course too difficult, and are in keeping with the original designer’s intent, or if we need that much in the way of change or cost.  In ugly rebukes, some are told to “shut up.”

Some independent golf savvy outsiders have previewed the golf designer’s plans and thought them to be superfluous and highly stylized, hardly in keeping with the term “restoration” that the prospective designer boasts.  One attorney knowledgeable in all things golf and club-related suspects a badly flawed decision-making process and predicts a doomed club and closed golf course in only a couple of years if they proceed.

Turning ugly, one dissenting Member is even sent a threatening letter by our leader to not contact anyone outside the club regarding this matter.  Our leader has revealed himself to be a bully and it is beginning to polarize members.

Now for the deathblow, our leader wants to throw on several million dollars of new debt onto our club during this current recession and at a time when the next generation increasingly prefer to play at a variety of golf courses or are leaving the game entirely.

Rumors are circulating.  The club is divided.  Members are leaving.  The Board may not even be following the Club’s Bylaws.  A lawsuit may be filed.  Ugly politics and social dynamics begin to pervade the club.  Under these circumstances would you want to join this club?

Now you’re thinking, “I’m glad this isn’t my club or no club is that stupid or clumsy!”  Or maybe your reaction is that I conjured this all up.  Unfortunately, our “mythical golf club” is real.  Our “mythical club,” was inspired by events at an actual private club, though that is really inconsequential as any of what has transpired at our mythical club is problematic and too often repeated.

The point to this story is that there are some important lessons for current and prospective private golf and country club members everywhere.  What happened here could happen anywhere, even to your club.  Your club will likely face some of these same questions, challenges, or circumstances as our “mythical club” in the next decade.  Golf club or country club bankruptcy is already here and likely to increase with the current demographics and economic climate together with the gentle, but steady decline in American golf participation the past decade.  Yes I repeat that American golf participation is declining and has been since 2000.

The vast majority of golf and private golf and country clubs are and have always been largely local businesses catering to a local clientele centered upon a 10-mile radius.  Like the real estate business, their underlying health is predicated upon location.  In all the areas in which I have either lived or studied, all things being equal, the clubs in prosperous, clean, safe neighborhoods with average to lackluster courses do better than those in declining areas with better golf courses.  They have a bigger pool of membership candidates and are also able to charge higher entrance fees and dues, and eventually upgrade their golf courses.

As a neighborhood’s affluence declines, the pool of potential new members within that 10-mile radius declines.  Thus the market quietly, but so very definitely will determine the ultimate success and even survival of a club.  Should you add incompetence and flawed decisions, you simply speed the death march.

Our “mythical club” has to work through all of this and its condition is “critical.”  I would be surprised if the club that inspired this story exists in its present form a dozen years from now.  Private clubs had better think long and hard before going into debt, as golf no longer has any pent up demand from which to draw upon.  Bankruptcy and closure for historic and prestigious private clubs once considered preposterous now looms.  Current and prospective club members need to face this reality and maneuver very carefully if they want their club to survive.  The old business model no longer applies.

Today there are many alternatives to the traditional private golf club model.  Public access golf courses were once considered of inferior quality, but now that is no longer the case.  Today many public courses might be considered equivalent or superior in quality (look, challenge, condition, physical plant, staffing, service) to their private course counter-parts. Avid golfers of upper middle class means (usual private club demographics) are increasingly likely to want to experience a variety of golf courses, especially when they don’t have to invest a significant sum of money to join.

Then there is the subject of food.  So what does food have to do with golf?  Once private clubs also were noted for superior food.  In many areas where private clubs exist, a variety of new high quality restaurants have opened and many people enjoy dining around as opposed to frequenting the same spot time and again.  Placing food-spending minimums at a private club adds not only a significant cost and inhibits other dining options, but has become necessary to keep this model working economically.  Tomorrow’s members may tire of supporting their club’s restaurant indefinitely and not buy into this.

Age of the membership is yet another factor one ought to consider.  Back in the 70s, a good friend of mine joined the famous Merion Golf Club for an initiation of only $500.  The club’s demographics were becoming very old.  Merion very quickly filled that membership gap and remains very exclusive.  Most clubs are not so fortunate.  Here’s why.  It was reported that between 2000 and 2006, American golf lost between 20-25% of its white male golfers between the age of 26 and 45.  That is a huge loss and a veritable ticking time bomb for the game moving forward.  So don’t count on easily filling lost memberships, even when the economy recovers.  The pool of eligible prime target members is shrinking.

A final very important point to consider is the cost of maintaining a membership.  In the case of our “mythical club,” they are about to impose a heavy new debt upon their membership.  Will they now be forced to increase their dues, their initiation, spending minimums, food, guest, and miscellaneous fees, or all of the above?  Will they have to cut staff or delay maintenance and future capital improvements?  Any of these actions will inevitably cause clubs to lose some if not many members and may also limit their ability to attract new ones.  And if you add a questionable location, the potential is even worse.

Back in golf’s heyday in the 1990s, one could argue that a private club membership made good financial sense in addition to the social camaraderie, exclusivity, and usually quicker pace of play.  Now that investment may be a horrendous financial one.  No one should count on any appreciation of his or her club investment.  And that statement could also even apply to the more prestigious golf clubs.

I applaud private golf clubs for wanting to upgrade their golf courses. In Northern California, I have enjoyed the course improvements made to the California Golf Club, Peninsula Club, Meadow Club, Claremont Country Club, the Olympic Club, Monterey Peninsula Golf & Country Club, and Los Altos Hills Country Club.  All are located in or around affluent areas so they may be wise decisions.  Conversely there are at least an equal number of clubs whose sizable expenditures did little to appreciably help their golf course in my opinion, much less solidify their membership, or improve their finances.  Here are the lessons:

1)    Some improvements/repairs are inevitable and necessary, but do not burden your membership with sizable debt.

2)    Do not assume that your golf course improvements will attract new members much less retain existing ones.

3)    In your new membership strategies, thoroughly examine your local demographics and the affect of increased costs.

4)    Defer on golf course changes that will make the course more difficult to play, slow the pace of play, or be expensive to maintain.

5)    Make any changes in a deliberate, open, and honest manner.

Whether golf clubs are behaving badly or simply trying to survive, if you are a member of a private club or thinking of joining one, you should participate in your club, and be cautious of people trying to force change without a deliberate open change process.  You should also consider the location, demographics, cost of membership, and quality of governance carefully when you consider joining a club.  If these factors appear negative, you are probably better off not joining.

A private golf or country club can still be great fun and an excellent way to enjoy golf, but, now more than ever, you should apply a wary eye to how the club goes about its business.

You may call me “Doctor Doom,” but sadly I have predicted with 100% accuracy the demise of more than a dozen golf facilities.  The only thing that surprised me is that it usually happened more rapidly than I had anticipated.

A wise old golf pro once told me, “It takes dozens of people to make a club great and only one or two to destroy a club.”  In these times, that is particularly sage advice.

Bob Fagan is the former Executive Director for the Northern California PGA. He currently works as an “Expert Golf Witness” in the legal field, and has consulted with more than one hundred golf facilities on service, operations, marketing, planning, safety and risk management, and governance.