If I were to wake up some morning with omnipotent powers and find myself the Czar or God of Golf (forget that “King” bit), what would I change about the game?  Would it be the complexity of the Rules, tapping down spike marks, changing the dress code, allowing more or less than fourteen clubs, or changing some famous player’s personality?  Would I ban cell phones or hazardous tobacco?  No, not even hardly.  My first, as well as my second and third priorities would to make golf a quicker game.  For me nothing comes close to this full blown cancer that is killing the game right now, not tomorrow or ten years from now. 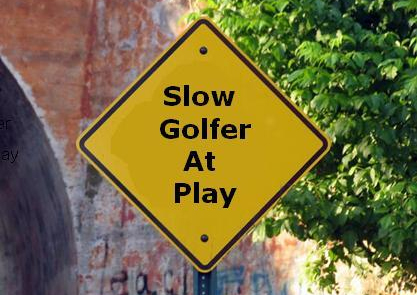 Sadly, these signs should be posted at all golf competitions!

Slow play has actually infested the game since the 1950s when Cary Middlecoff and soon after that a young Jack Nicklaus were making their marks.  In the meantime, the guardians of the game were ineffective in orienting millions of newcomers about the etiquette and rules that include “Playing without delay.” As slow as Jack Nicklaus was, he walked very briskly between shots, but television only captured his deliberateness. Soon this style became the norm and then got even slower no longer making even Jack Nicklaus not appear like an offender.  The cancer was set.  Enough about history, here is why the future of the game is at stake. 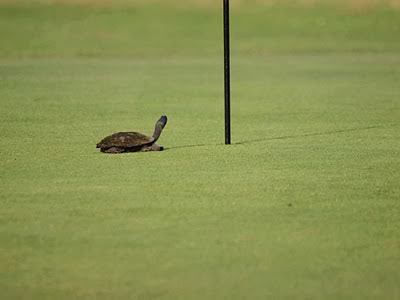 The quickest golfer in many competitions!

Makes Golf Boring – Do you enjoy watching the people in front of you listlessly chat, laboriously study their shots, or walk around lethargically?  Well, I don’t.  That’s boring.

Makes Watching Golf Boring – While golf viewership should be distinguished from participation, it does fuel interest in and credibility to the game.  Slow play may add suspense to a point, but today’s snail-like pace really detracts from presenting golf in its best light.  Thank God for video editing.  It’s no wonder the networks are reluctant to carry a match play event in real time – the delays and pace can put you right to sleep.

Makes Playing Good Golf More Difficult – Slow and “stop and start” play make it more difficult to maintain a rhythm and keep one’s concentration or focus.  That equates to frustration and poorer golf.  The game throws enough challenges our way without making it also an endurance test.  Finally, deliberate golf does not equate to better golf.  Interestingly, I helped champion Marathon Golf as a fundraiser for the PGA.  Typically over the years, during any 90-hole event contested in a single day, a full 20% of the field would experience the best round, lowest score of their life while playing very quickly – and these were club professionals and scratch amateurs!

Makes Growing the Game a Farce – Do you think that today’s generation that has been bred on instant gratification wants to stand in a fairway or sit in a golf cart waiting for someone ahead of them?  And this makes a difficult game for the newcomer even more challenging.  Can you say “Bye Bye?”

Drives People Away From Golf. Critics say that golf takes too long.  Slow play exacerbates that.  Investing too much time away from family and other activities has been resulted in a decade of decline in both golfer participation and the resulting spending even when the population is increasing.  There are more than a dozen others sports and pastimes that have reaped double and triple digit increases in participation at the expense of golf.  I repeat the phrase, “Bye Bye!”

Makes YOUR Golf and Mine More Expensive – Slow play means fewer rounds per course per day.  That is lost revenue that is never recovered and equates to less total income, which forces operators to increase prices and some (more every day) to go out of business.  While there is currently an oversupply of courses and we golfers enjoy discounted green fees, once this supply issue corrects itself and the economy recovers, you can expect much higher green fees.  Bet the ranch on it!

Hurts Accessibility – Slower play clogs golf courses restricting more people the opportunity to find a game, especially during peak periods like weekends when people have the time to play golf.  Also, as more golf courses continue to close due to failing profitability and player retention, customer accessibility eventually decreases too. 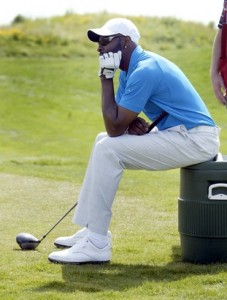 This is Hall of Fame football player Jerry Rice during his professional golf debut in which he shot a 12-over par 83. Do you think that the pace of play helps him?

Thankfully I am full of great ideas.  As Czar, I would enact an aggressive plan of action:

First I would slap two-stroke penalties on men’s and women’s tour players left and right with no appeals.  Assess three-stroke penalties for a second offense, and make mandatory suspensions from play for all golfers beginning with the third offenses.  Four-offense slow golfers would have the letter “S” branded on their foreheads.   I would strip colleges of NCAA and Conference titles for slow play and put them on lengthy suspensions for second offenses.  I would sentence junior golfers and club professionals who exhibit slow play to provide community service.  And anyone holding up play with a ball retriever in their hand should be pushed into whatever they are searching.

For the public, I would charge them for the time played, not the holes, and green fees would be doubled for rounds taking over five hours with the proceeds going to the Play Faster Foundation.  Slow players would be ineligible for Ryder Cup, Solheim Cup, Walker Cup, Curtis Cup, and President’s Cup teams and any course records in rounds over four and a half hours would be disqualified and erased.  Officials, who fail to enforce the rules of playing without delay, would forever be stripped of their blazers and armbands.  Clubs discovered to be safe havens of slow play would be taxed triple and assessed punitive damages for corrupting the sport.   Tax credits would be extended to operators and individuals who promote playing golf without delay (like me). 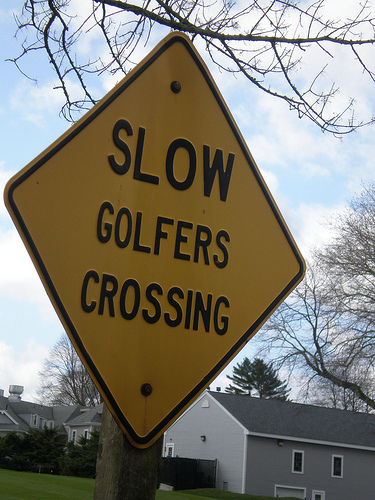 Golf equipment manufactures don’t get off either.  Longer hitting equipment makes for longer courses, which translates to longer, slower rounds.  I’d slap an excise tax on those new fangled balls and drivers, but allow the deep grooves that help us shave strokes and time off of our game, and furnish tax credits for any putters that will help me hole out in one rather than three strokes.

I would rate the golf courses and the golf course designers for being able to produce a quick-playing layout with offenders forced to commit to making presentations at public hearing boards considering new golf course developments.  Golf course superintendents who set up their courses to promote slow play would be sent to career counseling and remedial training.  Golf publications would identify slow play offenders among pros, top amateurs, and celebrities in a “Hall of Shame” category, and promote success stories among who play without delay.  Slow players would publicly and loudly removed from any Hall of Fame.  The Play Faster Foundation would offer a “12-Step” Program for game improvement, and golf course operators who fail promote my policies will go bankrupt sooner and forfeit their properties to housing and shopping malls to be erected upon their land.  Finally, all the slow players will rot in slow-play hell.  As for the player who plays without delay, they will return in their next life with the possibility of still being able to enjoy a great game called golf.

A bit extreme you say?  Are you even offended maybe?  Well, perhaps the curmudgeon (or genius) in me has erupted, but it’s been simmering since the early 70s when I began to witness too many (one is too many) self-centered people milking the game from a time perspective.   Quite frankly, this is one opinion I’m set with and willing to argue for, because slow play is absolutely killing the game I love.  It stresses golf’s whole infrastructure.  I have seen slow play as a PGA administrator and a club and rules official, and experienced it as a contestant and a customer.  All the “Grow the Game” initiatives go for naught if we don’t “get real” and act yesterday.  So do you want me to start this new job tomorrow?

Golf writer Bob Fagan served as the Executive Director/CEO for the Northern California PGA from 1991-98 as well as previously played and taught professionally, and broke most all of the All-Time records for the “Golf Nut’s Society.”  His chief claim to fame is that he has played more than 2,300 different golf courses – without delay!

4 Responses to “What I Would Change in Golf IF I Could?”