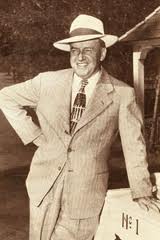 No Seve didn’t save the Ryder Cup though he singlehandedly did much to revive it.  The man who actually, in fact, saved the Ryder Cup was Robert A. Hudson of Portland, Oregon.

The year was 1947 and the Ryder Cup had not been played in ten years!  The United Kingdom had been devastated by WWII.  Golf was very low on the United Kingdom’s priorities compared to rebuilding their infrastructure and regaining economic and social stability.   No one on either side of the Atlantic knew if there would ever be another Ryder Cup again.  Correction, one man did.  That one man was Robert Hudson.

Hudson was a passionate man though not a particularly skilled player, never bettering a 16 handicap.  He was active, however.  As he would say, some men invest in yachts or baseball teams, I invest in golf tournaments.  For this he would become an advisory member of the PGA and his foresight toward the golf profession was uncanny. 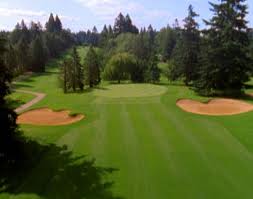 The par-five 5th at the venerable Portland Golf Club.

Hudson was a Portland, Oregon grocery and produce distributor who dipped into his own purse to personally resurrect the international competition.   Just the year before, his club, the Portland Golf Club, had hosted the PGA Championship won by Ben Hogan.  Hudson and his fellow Portland Golf Club members made their course available again for the Ryder Cup.  Interestingly, Hudson had never even seen a professional golf tournament before 1944, but he was hooked.  That year when he heard that the local professionals would have to cancel their Portland Open for financial reasons, he came to the rescue.  He would later sponsor more Portland Opens as well as a Western Open and he espoused one rule.  “The players – all of the big names or unknowns – must be treated as if they were guests in my home.”  He would provide the players and their wives free free meals, bar service, caddies, transportation back and forth from their hotels, and a lavish banquet/dance at a tournament’s conclusion.

What Hudson did next with regards to the Ryder Cup is rather extraordinary.  He paid for the entire British team to travel over to the United States on the Queen Mary.  Once in New York, Hudson met them and managed to convinced striking dock workers to unload their baggage on time.  Hudson then wined and dined them at the Waldorf Astoria, and accompanied them by train for the three-and-a-half day cross-country trip to Oregon.  He then paid for their housing, meals, and everything.  From that point on, the British PGA commenced planning to fund team travel for this bi-annual event.  This energetic golf supporter would later in the year be voted “Man of the Year” by the newly formed Golf Writers Association of America.

Ben Hogan was the playing-captain for the Americans (who held himself out of the single matches due to the strength of their team) won over the war-weary Brits by a lop-sided 11-1 score on a rain-soaked Portland Golf Club course, which is hardly the point.  The reason that the 1947 Ryder Cup Championship was the greatest of them all is that is was held at all.  Had Robert A. Hudson and the membership of the Portland Golf Club not risen to the occasion, the competition may well have died then and there.  Instead, it resumed and grew into the single most important team event in golf.  Consider and thank them and Ryder Cup Savior Robert Hudson when you enjoy the Ryder Cup!