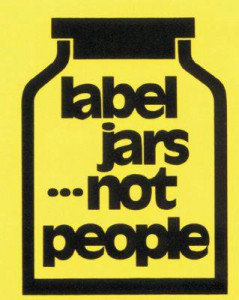 Black or white, man or woman, straight or gay, young or old, Christian or Muslim, Democrat or Republican, rich or poor, employed or unemployed, educated or not, stupid or gifted, successful or unsuccessful, winners or losers? These are no more than labels – hurtful ones. Comparisons like these that are often brought up by the media and others including many leaders whether premeditated and overt or simply by habit through tradition, they divide and stifle us. I would challenge you to wake up to this manipulation. When we begin to focus on our commonalities as mankind all riding together on this space ship called Earth, we will begin to progress… and sadly not until then in my humble opinion.

Challenge those who would label you and don’t accept their message or their label.

When people travel, they are apt to discover the majority of people they meet friendly and helpful, even loving and generous. Political borders and political leaders who tout labels along with fear fade away. Introduce labels and you encourage prejudice. Prejudice based on differences leads to fear and fear breeds violence. It’s been happening all too long not to begin to notice. How about noticing and celebrating our differences?

Regarding the use of violence, the twentieth century was a century of war and bloodshed with no peaceful spillover into the next millennium. It was a century in which hundreds of millions of people died violent deaths to expand political goals and secure precious natural resources. People were divided by labels at every turn – nationalities, religions, ethnicities, races, etc. Haven’t we learned anything from those horrific tragedies? Doing the same thing and expecting different results is insane. In the new era of the twenty-first century, consider humanity to be guided by the overriding principle that killing is never acceptable or justified–under any circumstance. Unless we realize this, unless we widely promote and deeply implant the understanding that violence can never be used to advocate one’s beliefs, we will have learned nothing from the bitter lessons of the twentieth century. Isn’t it about time we celebrated the many gifts of our commonalities rather than separate ourselves with labels?