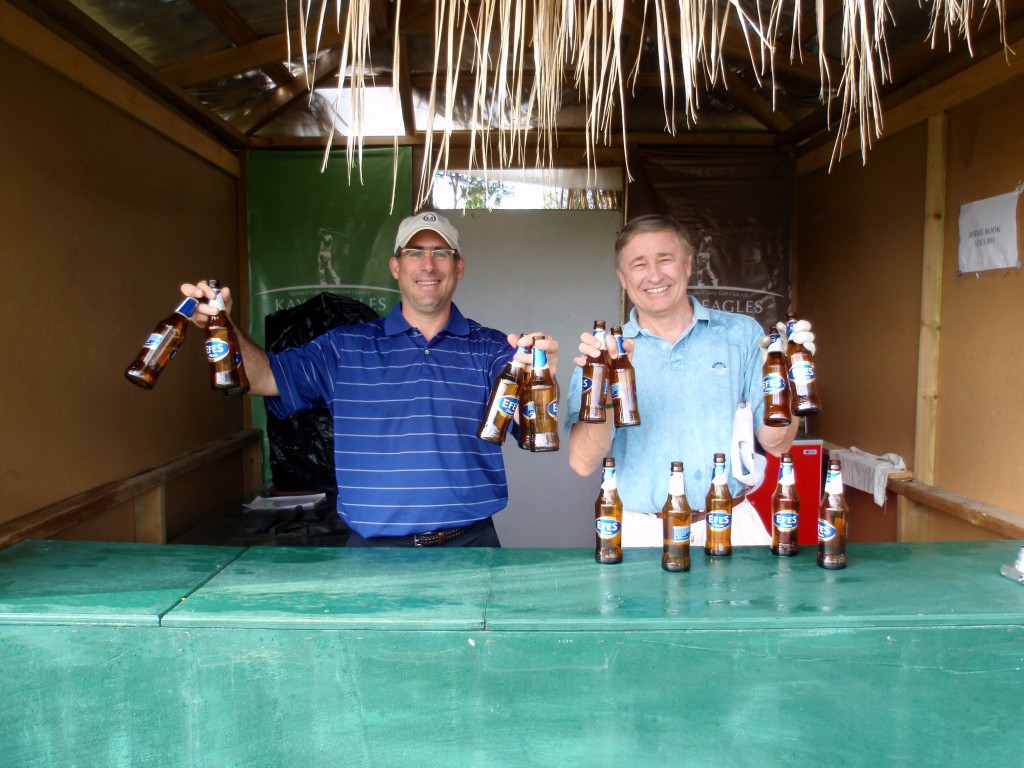 My dear friend and “The A Position” boss Jeff Wallach and I. Whether raiding an all-you-can-drink beer stand in Turkey or making a frantic golf course tequila run in Mexico, we have somehow managed to remain friends. No doubt, my inclusion in “The Road Warriors” will test that relationship! (From the looks of things, I won this contest in Turkey by four bottles.)

What I am referring to is that wily band of accomplished journalists from The A Position (‘The Road Warriors”) that travel the globe delivering gads of pithy, sage comments, and interesting observations as they go. You see, they play, they wager, they eat, they drink, they test equipment, they meet interesting folks, and they decipher courses and surrounding attractions, and these connoisseurs of nearly everything somehow produce daily gems worth reading. For me to do that takes days and lightning bolts of inspiration, but not these guys and gals.

Then there’s the golf part. Yes, I can still play more courses in a day than a sane person would ever consider, but that doesn’t mean I play them well. In reality that’s my only claim to fame. My golfing resume resides in the past and like nearly everyone else out there, the older I get, the better I used to be. While I can still talk an “A-game,” I seldom play one. Will these scribes discover my fraud and expose me? Finally, there’s the “starstruck” factor. How will I be able to play, let alone write anything with these guys.

Feels like I’m being thrown to the wolves, stepping to the plate in a major league ball game, or returning a punt in a Super Bowl game. Why, well I’m being paired with virtual Ryder Cup golf writers Jim Frank and David Gould. Jim has been the Executive Editor of Golf Magazine, Golf Connoisseur, and the Met Golfer and written a ton of books you would recognize with people like Dave Pelz and David Feherty. David Gould has enjoyed the same position at Links Magazine as well as Travel + Leisure Golf in addition to four popular books of his own and a host of other assignments. In other words, this hack of a rookie is nervous. Can you spell “out of your league?”

The only relief I experience is the absence of veteran Road Warrior Peter Kessler,“The Voice of Golf,” Peter Kessler. I’ve briefly met the urbane Mr. Kessler on a couple of occasions and he once interviewed me for his show, but he never had to watch me play. He’s a freakin golf celebrity and I dread with shameful anticipation as his baritone voice bellows, “Fagan, you’re still away!” Peter’s a great guy, but I breath a sigh relief learning he’s not making this particular edition.

I also get to play with my good friend, Jeff Wallach. He’s also my boss at The A Position. Jeff’s caught my act before in Turkey and Punta Mita, Mexico of all places. While I have some incriminating pictures of Brother Wallach on the golf course, we all know that doesn’t amount to much. He’s as talented as the rest of the group when it comes to writing in both golf and beyond though on a good day I hope I can beat him on the course. Oops, perhaps he will be my partner.

Finally there is James McWilliams. All I have to know about this gentleman is that he is our very talented videographer. That should say enough. While my words may lie, his video is much tougher to circumvent. Let’s suffice it to say that I’d much rather read what my fellow scribes have to express and hopefully this guilt by association will raise my writing and golf game as well. Together they should all make for some entertaining and illuminating reporting, but hopefully not about me!