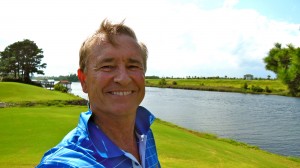 Golf Road Warrior Bob Fagan as he scouts the Myrtle Beach golf landscape along the Inter-Coastal Waterway at the 18th at Myrtlewood’s Palmetto Course for the upcoming assault of his A Position compatriots.

One of the joys I experience playing many different golf courses as a “single” is the opportunity to meet so many wonderful people. Around Myrtle Beach your playing partners are likely to be as geographically diverse as most anywhere you will find. Use my experience of the last three days for example.

I played with three gents from just north of Pittsburgh, PA, two Brits who live near the Welsh border. Next I played a “quiet round” with three French Canadians from Montreal. As their English was somewhat limited and hard for me to understand and I speak no French, there was not quite the amount of usual exchange that I normally have, but we all enjoyed ourselves and nonetheless left with big smiles and hearty handshakes.

Then I played with a great guy who hails from one of my favorite summer spots, Missoula, Montana. He was joined by a transplant from Virginia and a friend visiting him. Both just happened to move to Myrtle Beach and by chance their businesses are situated adjacent to one another. The Montana native transferred his fine print business to Myrtle Beach while the Virginian is busy repairing clocks.

Then I joined up with a couple about my age that grew up and met in Ohio, but have lived and raised their children in Durham, North Carolina where he publishes several news papers. They had a second home in Myrtle Beach and sold it a couple of years ago, but enjoy the area and golf so they still frequent the area.

Yes, I’m the guy with the smile who the starter asks or tells you is joining you. By the end of 18 holes we part as friends with a typically special bond of trying to master the elusive game for four-plus hours. As much as I relish playing different golf courses, it is just as much friends meeting new friends and learning about other’s lives. 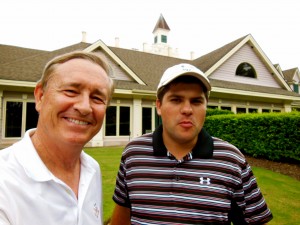 Typically, I can hold my own with most everyone I play with, but with the only single I played with, I got dusted. In other words, I was hopelessly outmatched. This was Tim Gavrich, the 22-year old man who is coordinating our Road Warriors campaign. As we stepped to the first tee of the Long Bay Golf Club (one of the hardest courses in the Grand Strand), he mentioned that he wanted to play the tips, but I didn’t have to join him. Knowing that my game has an unrecognizable amount of calcification, I wisely declined. Tim doesn’t particularly strike one as a standout golfer as he is of average build, left-handed, and doesn’t wear a golf glove. After his opening tee shot, I knew I was far out-matched.

Tim was a star player for Washington & Lee University winning several college tournaments. His index is regularly scratch or better. Even from the tips, he was attacking the lengthy, well-guarded par-fives at Long Bay in two and enjoyed a couple of two-putt birdies. He scored an easy 2-under 34 on the incoming nine and would have easily been 5 or six-under for the day had he made any of his many short birdie putt or not started with a three-putt. Yes, on that first hole I hit a sweet drive about 265 yards and was still thirty yards behind Tim’s from the back tee. Tim has the clubhead speed and ball-striking ability of a touring professional and at his tender age will be competitive and impress people for many years. I play with him again today and if I get sucked into any match, I told him he’s to be my partner.

Now as my fellow Road Warriors arrive today – Jim Frank, David Gould, and Jeff Wallach, they will be stuck with me all week as we encounter some very exciting golf prospects around Myrtle Beach. These guys are the pros when it comes to writing and it will be just as much fun learning of their many stories and experiences. Golf is a great “friend-maker” and Myrtle Beach is a sublime setting to enjoy old friends or enjoy new ones!