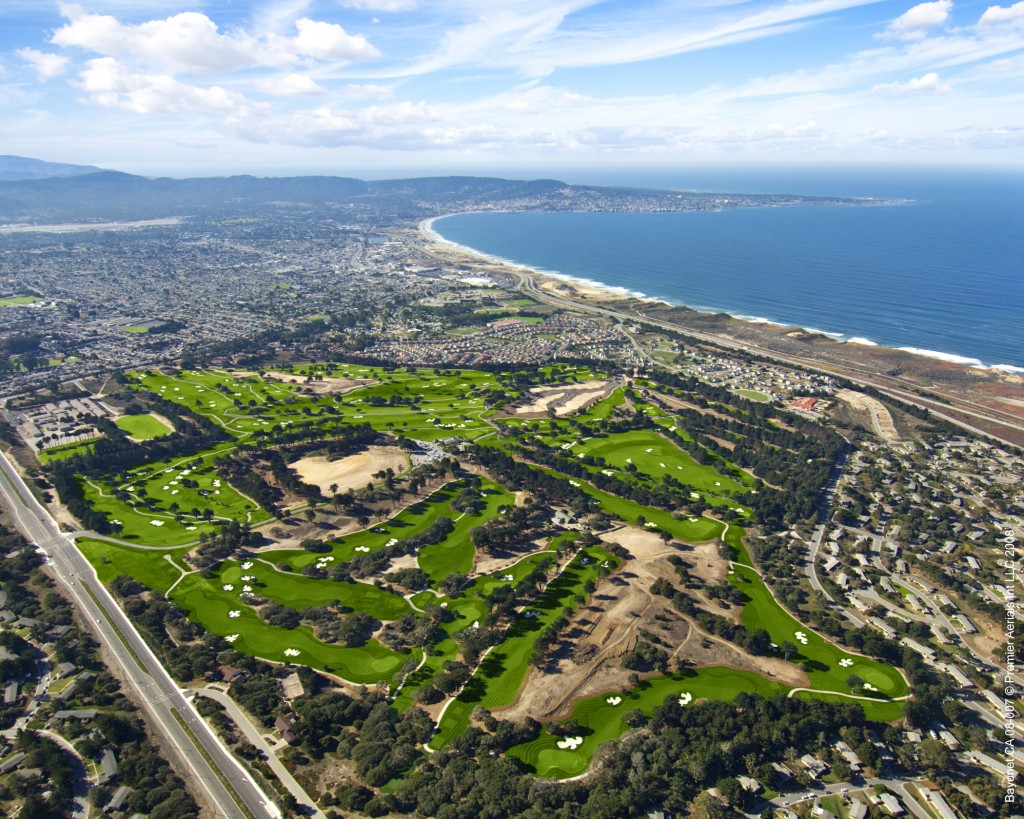 Bayonet Black Horse is truly one of America’s most overlooked golfing gems!

You smell the salt air and its moistness signals that the ocean is nearby.  Picture thick stands of cypress, oaks, and pine positioned on immaculate rolling fairways punctuated with bright dazzling white bunkers, ending in quick, smooth undulating putting surfaces with an occasional view of the Pacific little more than a mile away.  It’s the Monterey Peninsula and you may just be at one of the West Coast’s best golf values – Bayonet Black Horse. 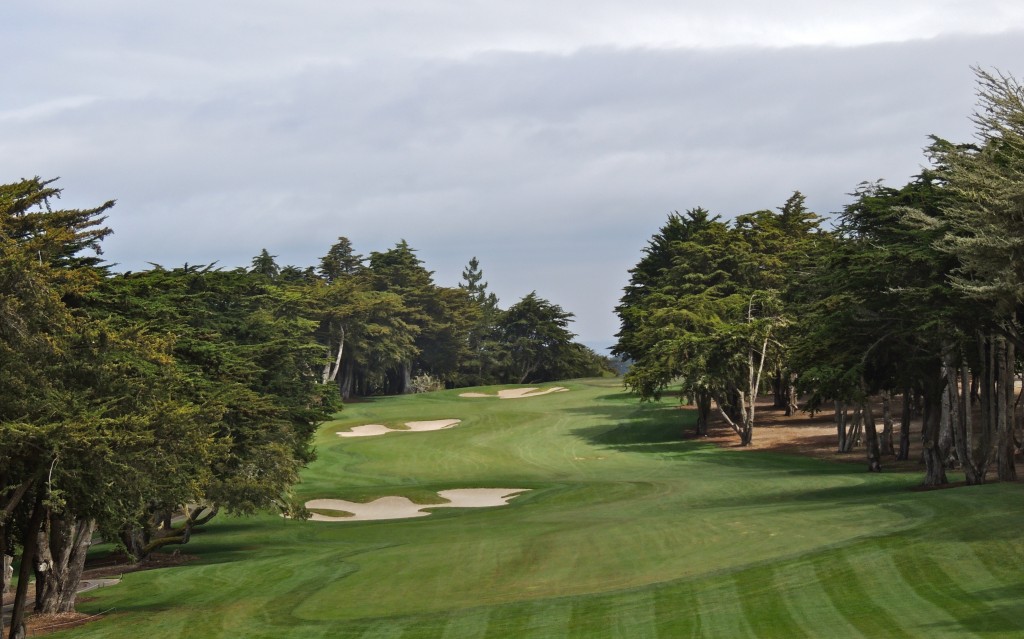 The uphill par-five first hole on the Bayonet has seen many a skilled player in a host of important competitions over the years.

Two of America’s best side-by-side golf courses anyone can play are actually located in the Monterey Peninsula area of Northern California, but both remain relatively unknown. If you are a discriminating golfer and miss playing Bayonet Black Horse, you have badly missed out on two of best golf courses that the West Coast has to offer!

Yes, Bayonet Black Horse is the full name of a superb two-golf course public golf complex that was once the secure domain of the United States Military at Fort Ord on the Monterey Peninsula. Today, the city of Seaside owns the property and someday it may be developed as a resort. For now, however, it simply denotes two of the best golf courses you might imagine. 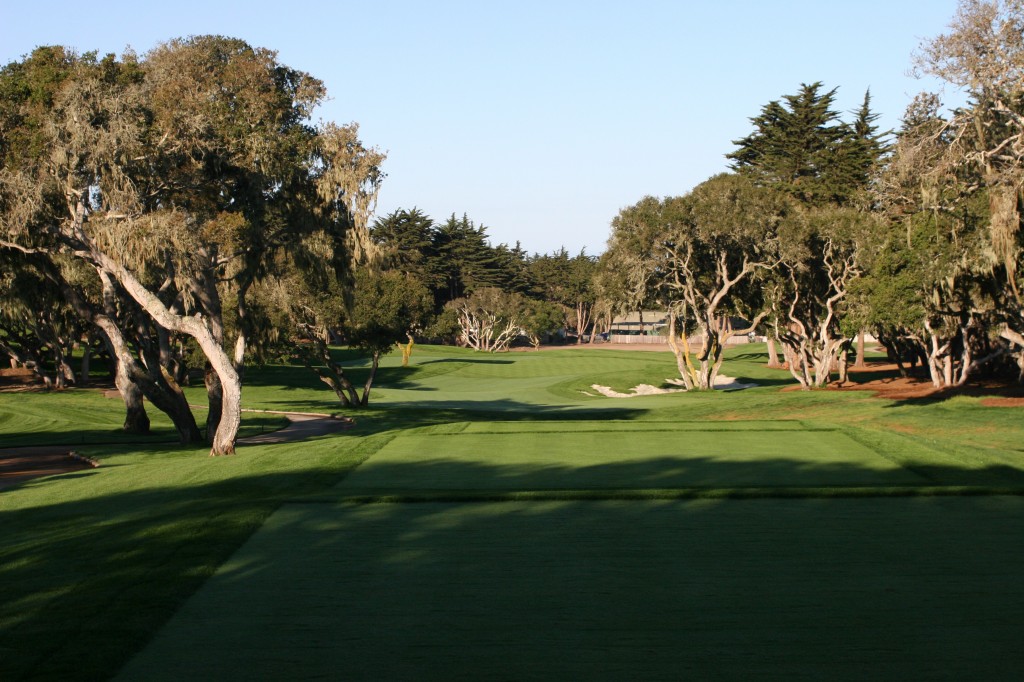 Beautiful holes abound on either course. Shown above is the 198-yard 5th hole on Black Horse. (Photo courtesy of Julio Rodriquez.)

Because Bayonet Black Horse was situated on a military base, relatively few outsiders had the opportunity to play there, though the facility with its Bayonet Course was always regarded as one of the U.S. Army’s premier military golf layouts. Accordingly neither golf course ever received much attention with the general public. When the Fort Ord base was closed, these courses became public. The fact that the property is owned by the City of Seaside, the complex is  “public,” but that barely describes the type of quality golf you will encounter. The look, feel, and challenge of these two beauties are more akin to “championship” or “high-end resort” style layouts. 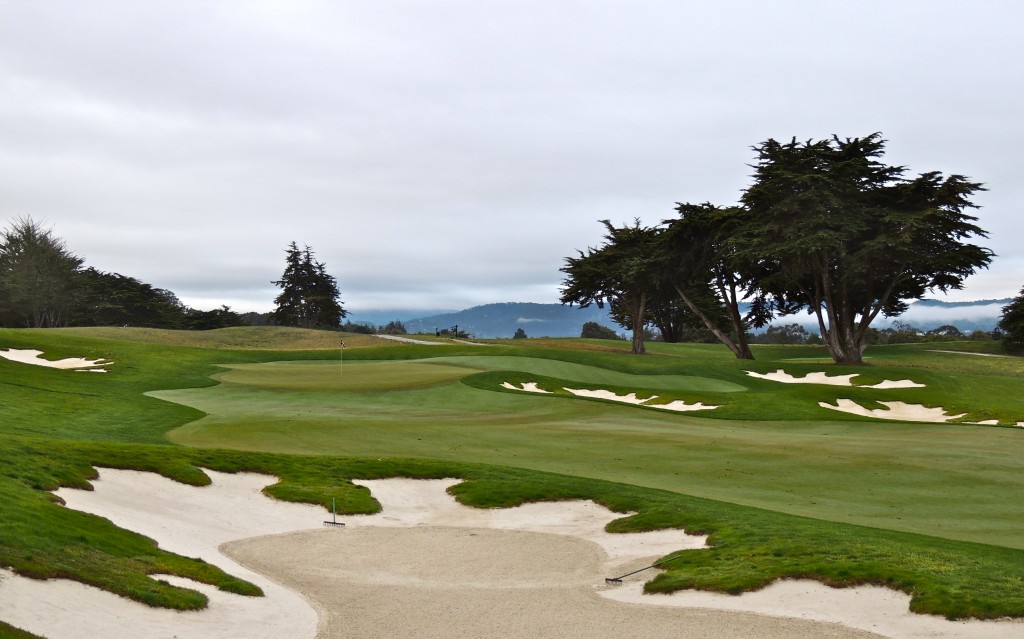 The par-five first hole on Black Horse features the serrated bunkers that distinguish it from the Bayonet.

The history of these two golf courses is uniquely interesting. Commanding Army officer General Bob McClure with the help of a local golf professional Robert “Boots” Widener designed and built the Bayonet Course in 1954 and named it in honor of the 7th Infantry Light Fighter Division. McClure who was a distinguished veteran of World War I and II as well as the Korean War also garnered input from one of his soldiers and future Golf Hall of Famer member Ken Venturi. McClure was a left-handed with a habitual slice so he accommodated his game with the three sharp doglegs right within the stretch between the 11th and 15th holes, aptly named “Combat Corner.” 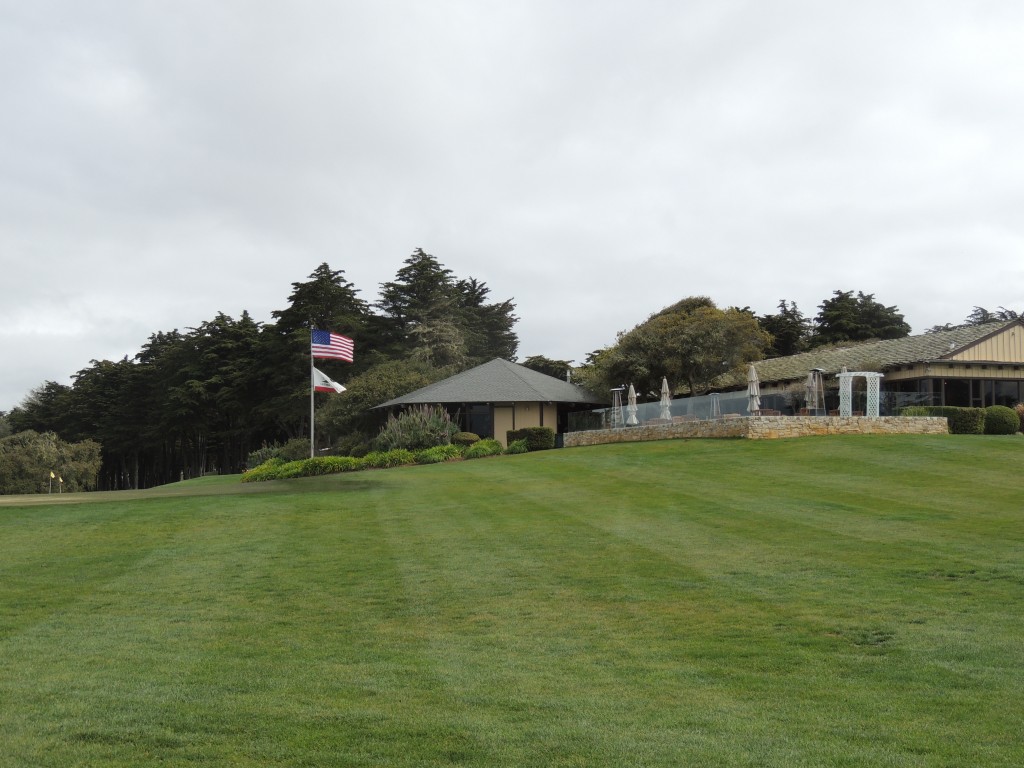 The addition of the Black Horse Course came in 1964 when the Army was considering putting housing in on the South side of the property. McClure and the golf course superintendent Merle Russill quickly road around the property in the General’s jeep. Anxious to keep the property open, the two came up with a routing in less than two hours for a new 9-hole course. The next year McClure retired, but his successor General Edwin Carnes continued to work with Russill as well as McClure and they decided to add an additional nine holes in 1967. 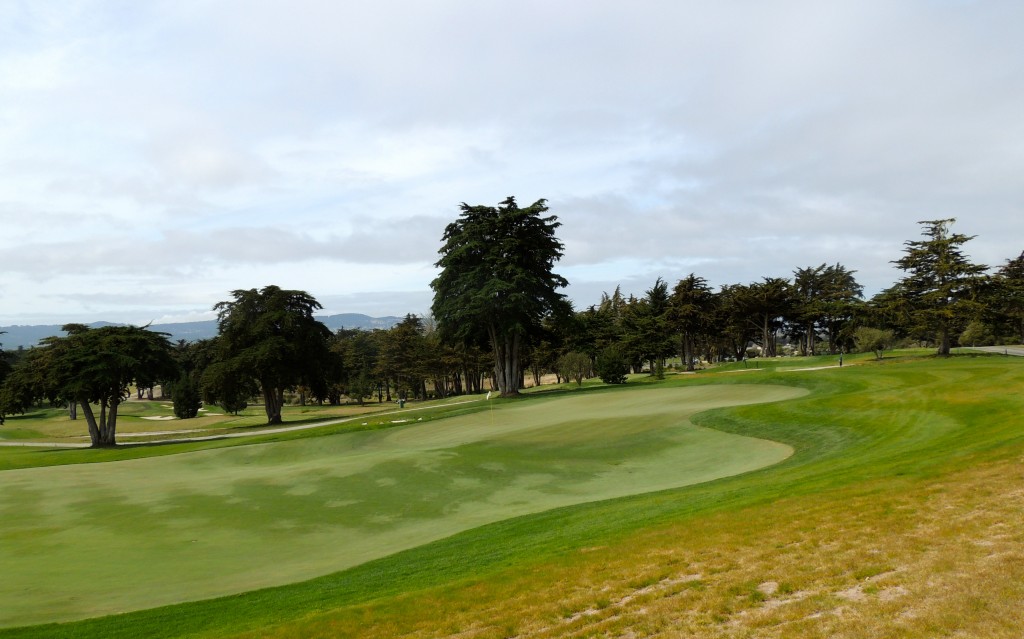 A close inspection of the par-four 3rd green on Black Horse reveals the many undulations that are characteristic of that layout and protect par.

Once the military left, the Bayonet Course in particular became a favorite for local competitions including PGA TOUR Qualifyings. The course has always had the reputation for being a beast of a test of golf, one that I would term “the Bethpage Black of the West Coast.” No championship test in the region including the Lake Course at Olympic plays any more difficult. Like its counterpart about two hours north in San Francisco, the Bayonet Course was built upon a treeless site, but an aggressive tree-planting campaign matured the layout into a shot-maker’s alley fairly choked with thick strands of cypress, oaks, and pine trees. Only great shots would allow for good scoring, but at that time the shaping and bunkering was rather nondescript and conditioning was usually only average. Eventually that all changed. The PGA of America was so impressed with the golf that chose their Professional National Championship to be contested here in the summer of 2012. Like those before them, most of the competitors found both layouts very challenging, but all sung their praises. 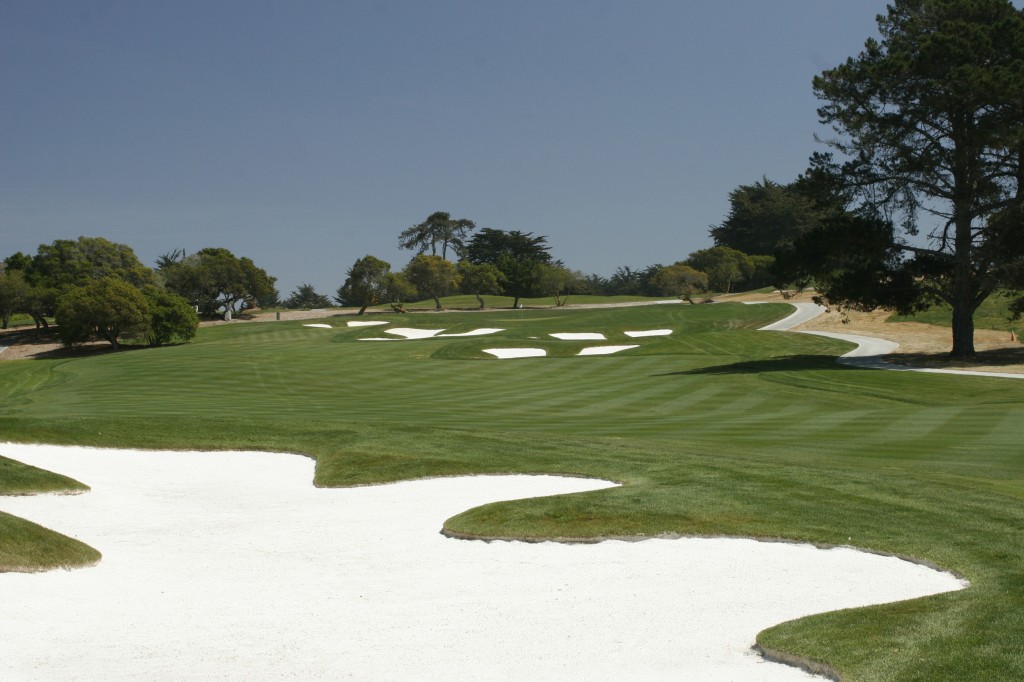 I count the uphill dogleg-right 476-yard 9th hole on Bayonet as one of the most difficult two-shotters in America! (Photo courtesy of Julio Rodriguez.)

The Black Horse Course was the newer of the two built on more undulating parts of the property with stirring views of the Pacific only little more than a mile away. Its original weakness was that it wasn’t a very challenging test of golf. In 2008, new management invested $14 million into what might best be described as a renovation project for both courses. What would I discover? 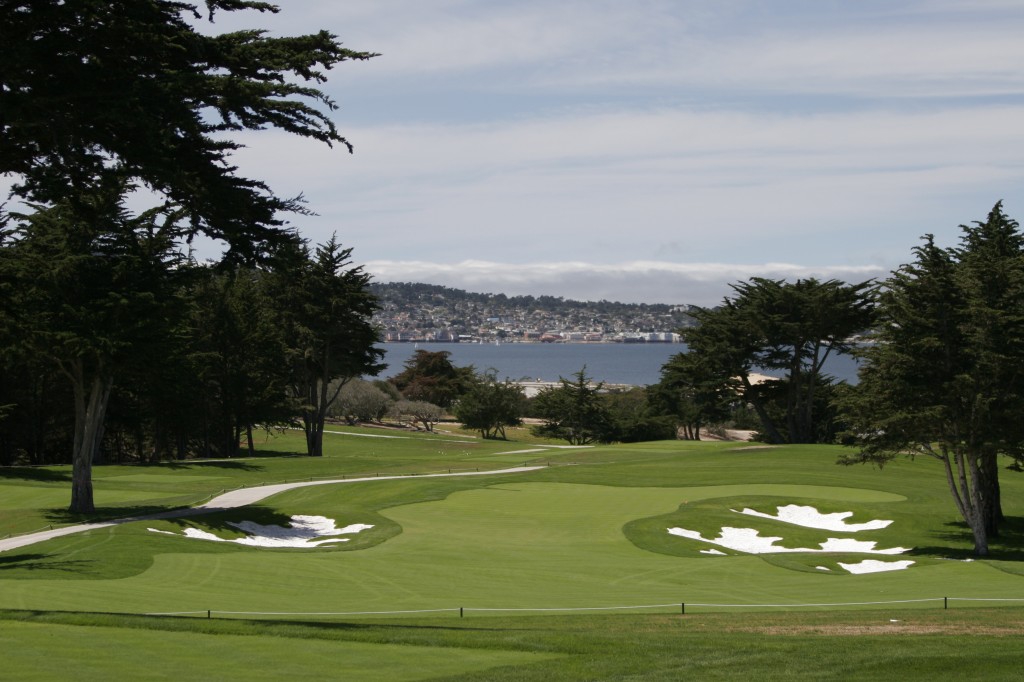 Black Horse has evolved into one great golf course and a beautiful one as well. Pictured above is a view across the fairway toward to the par-four 7th green. (Photo courtesy of Julio Rodgriguez.)

Returning to play Bayonet Black Horse Courses, it is amazing to see each course’s transformation. Architect Gene Bates applied his skills to provide two tests of equivalent entertainment value. The previous “weak-sister” Black Horse is just as attractive an option today as the renowned Bayonet Course. Bates also gave each course a distinctively different look centered on the bunkering. The Black Horse Course features serrated edges to its bunkering while the Bayonet Course has smooth finishes to its classic style hazards. View any hole and it’s easy to identify either course based on that very fact. While the Black Horse’s distance was stretched more, the Bayonet only had a mere 16 yards added to the 1954 McClure design. Both tests, however, play considerably longer due to the heavy sea-level air and damp soil conditions. 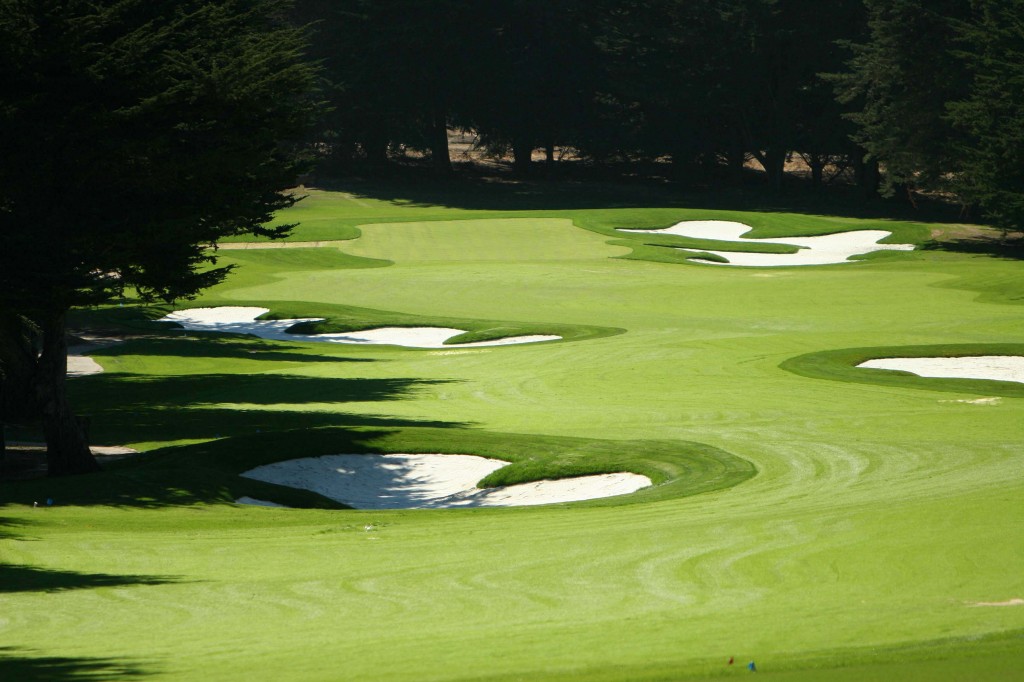 Even downhill, the 613-yard 8th on Bayonet plays long, tight, and tough to a narrow putting surface. There are no short-cuts to making par here. (Photo courtesy of Julio Rodriguez.)

Bates also rerouted the layouts, shifted hole avenues, moved greensites, and repositioned tees.  The Bayonet Course remains the slightly more difficult of the two courses. The holes for the most part are situated in tunnels of dense trees very much akin to the look and style of the Olympic Club’s Lakeside Course in which many national championships have been contested. These trees for the most part limit the views, but there’s more than enough challenge to keep your attention. Competitors who have played both may actually maintain that the Bayonet may be the tougher! (Its slope is 141 and its rating is 74.8.) Its 7,104 yards from the tips plays every bit of its distance. Errant drives are always penalized by the thick trees making successful recoveries very rare. The bunkering is traditional in style with its smooth round edges. Likewise the shaping of the putting surfaces is roundish with no severe undulations, but getting above the hole can make for most challenging putts. Of all the holes, the 476-yard par-four 9th with its all-carry approach to an elevated green is an absolute beast while my favorite might be the 527-yard finishing hole with its great views and best chance for a birdie. 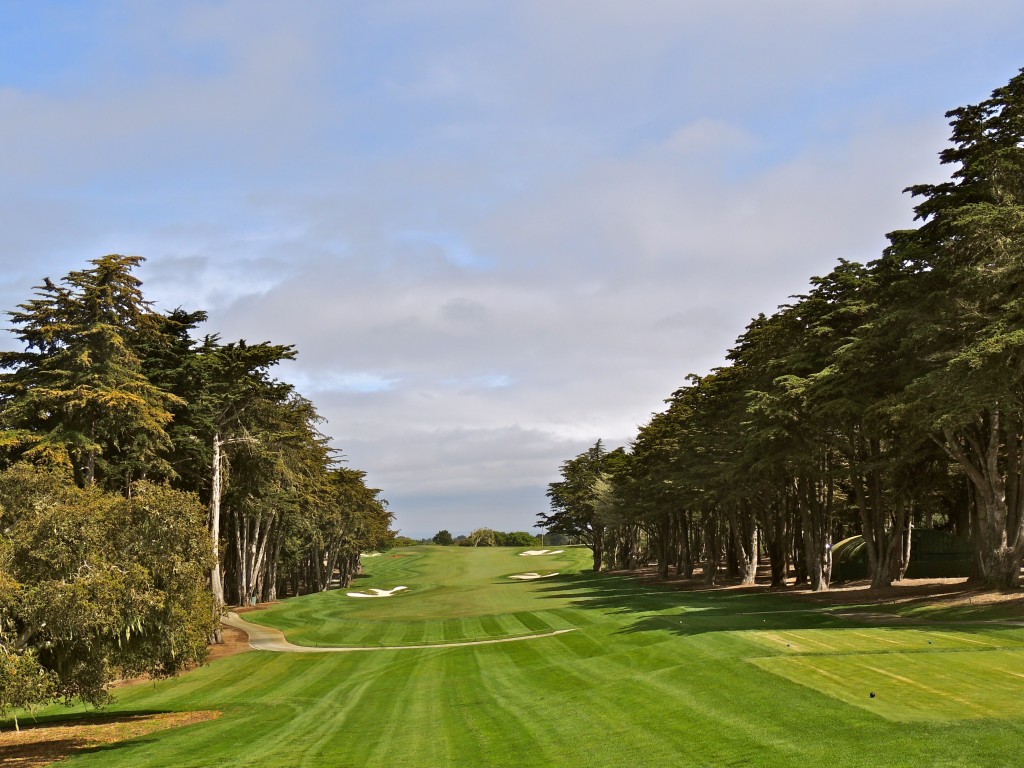 Situated right by the clubhouse, I always look forward to the par-five 10th on Bayonet as one of my favorite tee shots. Only a day before my visit, the large pine guarding the left side up by the green fell. Here is the view afterwards. You can faintly see the brown area where is once stood sentinel to a portion of the green.

The Black Horse Course features much wider fairway avenues, but more fairway bunkering. It’s just a little bit shorter at 7,024 yards, but commands the more picturesque views of the adjacent Monterey Bay. (Black Horse shares an identical slope of 141 and a course rating of 73.8.) Interestingly, on the front nine, the Black Horse features a 247-yard par-three (the 2nd) and a 265-yard par-four making for the rare combination of a par-four some might drive and a par-three that many can’t. Already noting the serrated bunkering, Black Horse seems to have a few more hilly lies and the greens are far more undulating than the Bayonet. Like the Bayonet, I count the 605-yard 18th as one of my favorites as it parallels the last hole there. Otherwise, the par-three 15th is a brand new hole and with its stirring view is certain to impress. 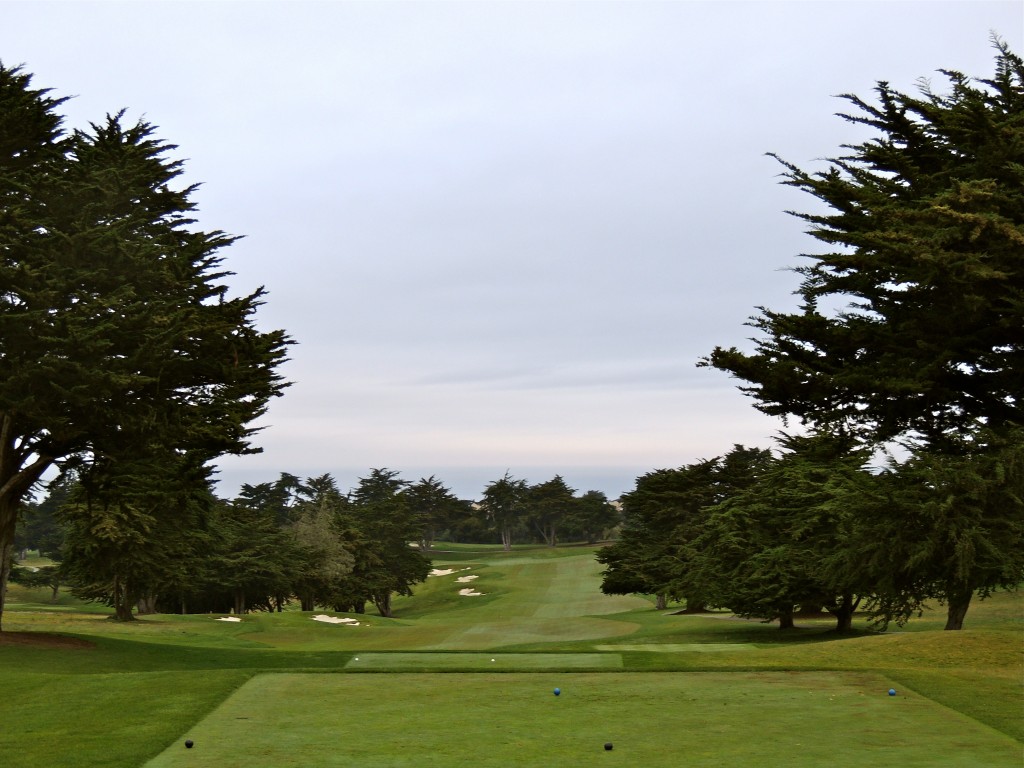 Above is the view of the par-five 18th on Black Horse, while below is a picture taken from behind its putting surface. What an attractive finishing hole! 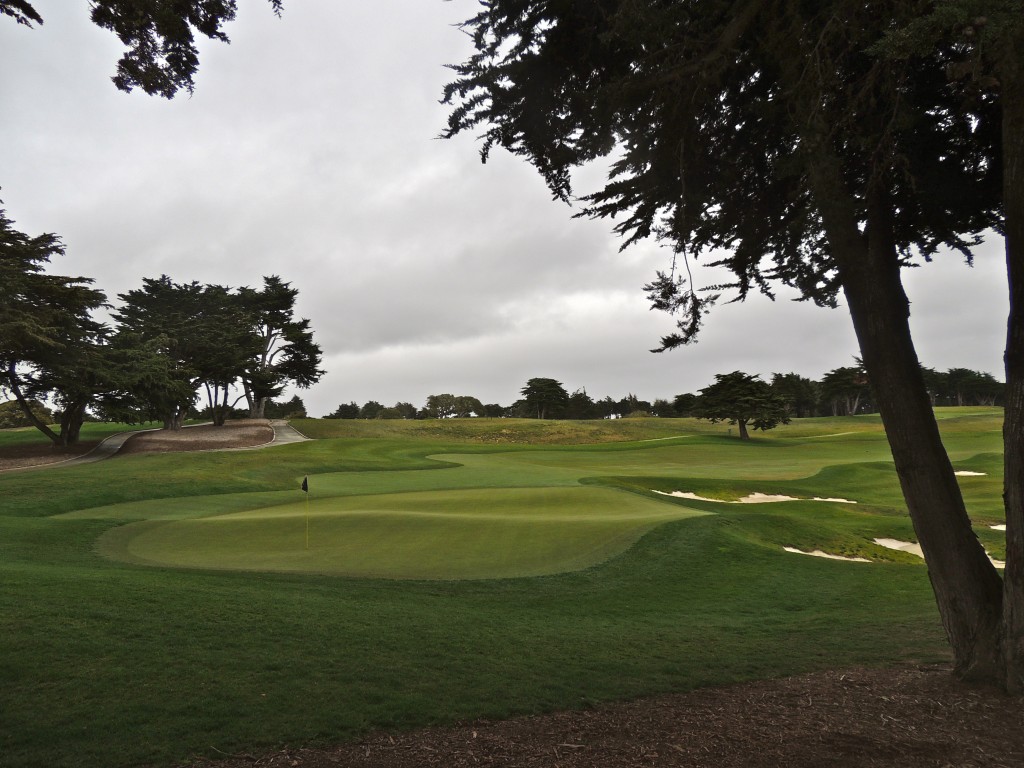 Interestingly, both golf courses begin and end with par-fives and architect Bates left enough of each course intact to remain recognizable, but only barely. Beyond the golf course, I was amazed by the new expansive practice range and short game areas that were introduced. They make for terrific place to either warm-up or to really work on your game. What’s more, any trips around either course will surely work up your appetite. Thankfully you will encounter their casual sports grill from which you can recount your round or gaze upon the stunning views of the Monterey Bay from the outdoor patio. Menu items include the best in fresh, local ingredients. Worthy of a trip unto itself, Bayonet Black Horse features several attractively priced “Stay and Play” options. (Refer to: http://www.bayonetblackhorse.com/.)

Visiting the clubhouse, you will observe pictures of American golfing greats such as Arnold Palmer, Jack Nicklaus, Johnny Miller, and Ben Crenshaw together with Ken Venturi all playing the Bayonet Course. If you were not associated with the military, getting to play either course was a tough ticket. Now not only has each golf course and the entire facility experienced immeasurable improvements, but anyone can play there. Like I did, you will encounter two of America’s true hidden gems and so very much worth playing!

The aerial view below of Bayonet Black Horse reveals just how close it is located to the Pacific Ocean. Note the spacious new practice area in the foreground. 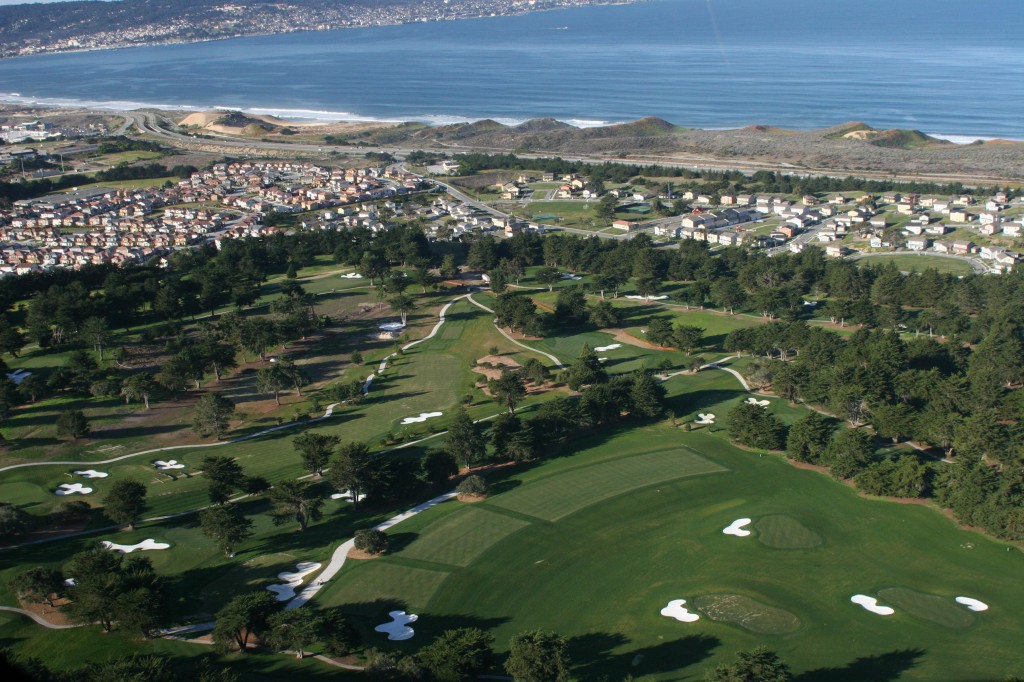 All the bunkering on Black Horse is serrated as seen on the par-four 10th tee. 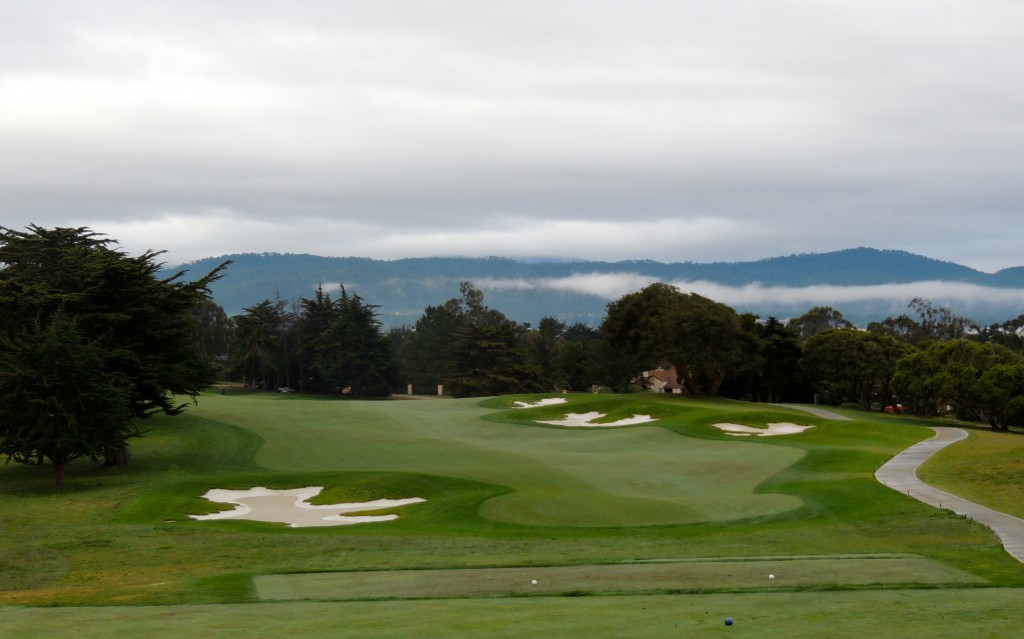 Really big hitters can have a go at the par-four 7th green on Black Horse by cutting over the trees to the right of the picture. 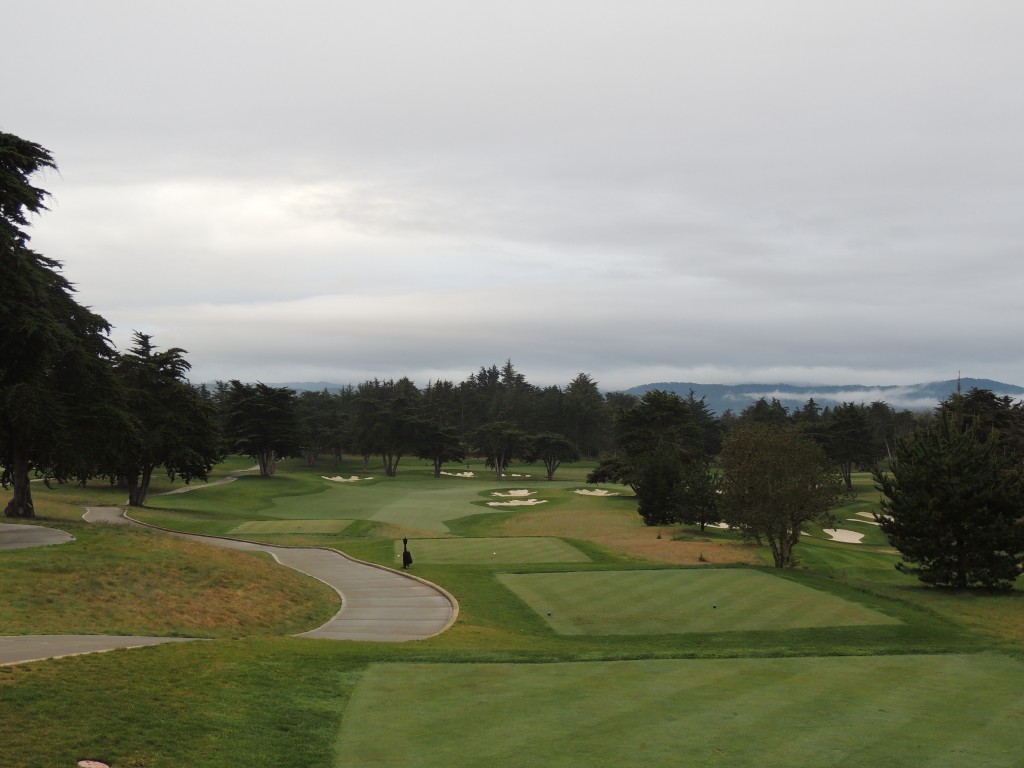 The 436-yard 2nd hole on the Bayonet is classic – narrow, with a relatively small target, and smooth-edged bunkering. (Photo courtesy of Julio Rodriguez.)

The 225-yard 17th hole on Bayonet is a brand new hole. The former par-three faced the same direction, but was located to the right on the other side of the trees. This vacated area is reserved for a future resort hotel. (Photo courtesy of Julio Rodgriguez.) 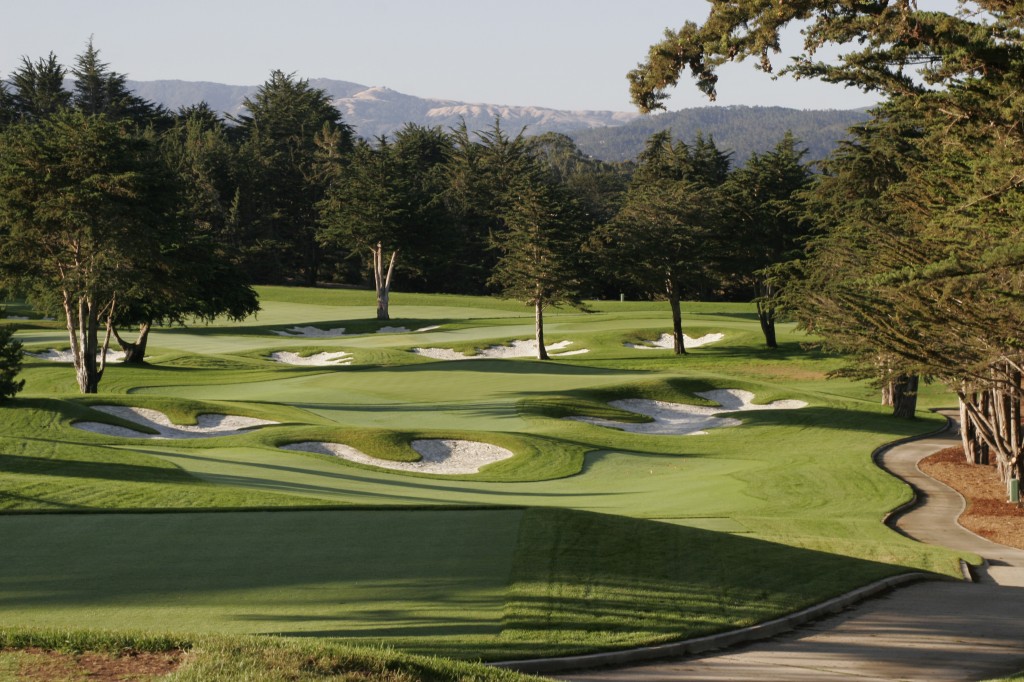 The par-four 9th green on Black Horse like all the others has few straight putts. 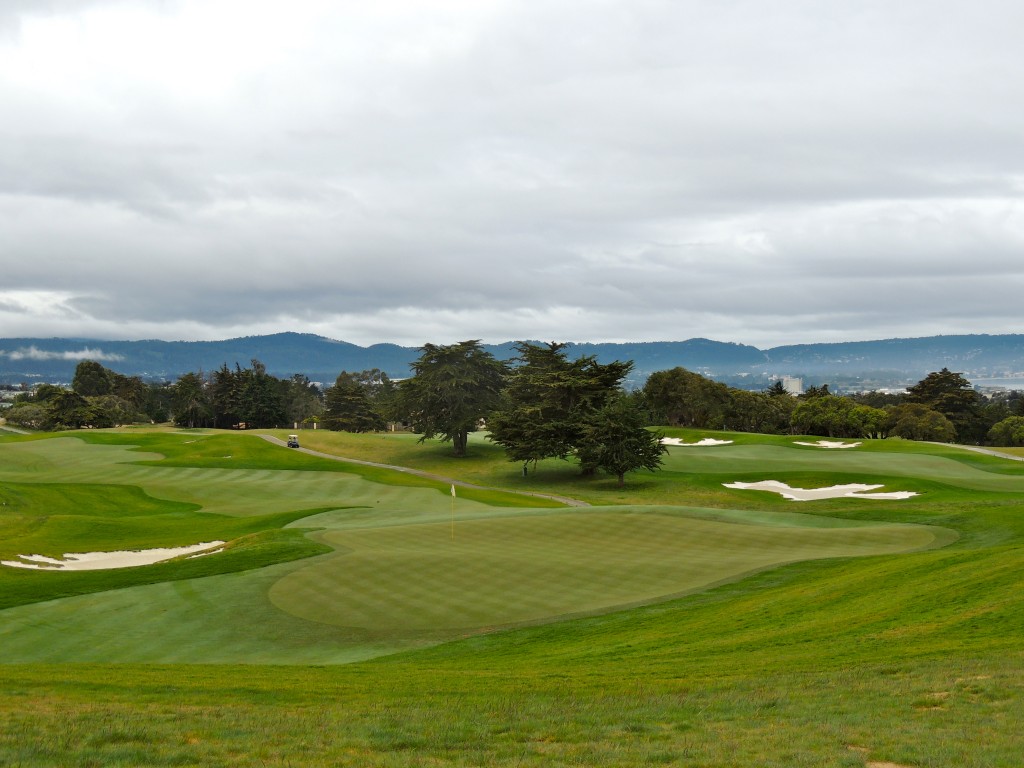 Elevation changes are common on Black Horse as evidenced by the 398-yard 14th. 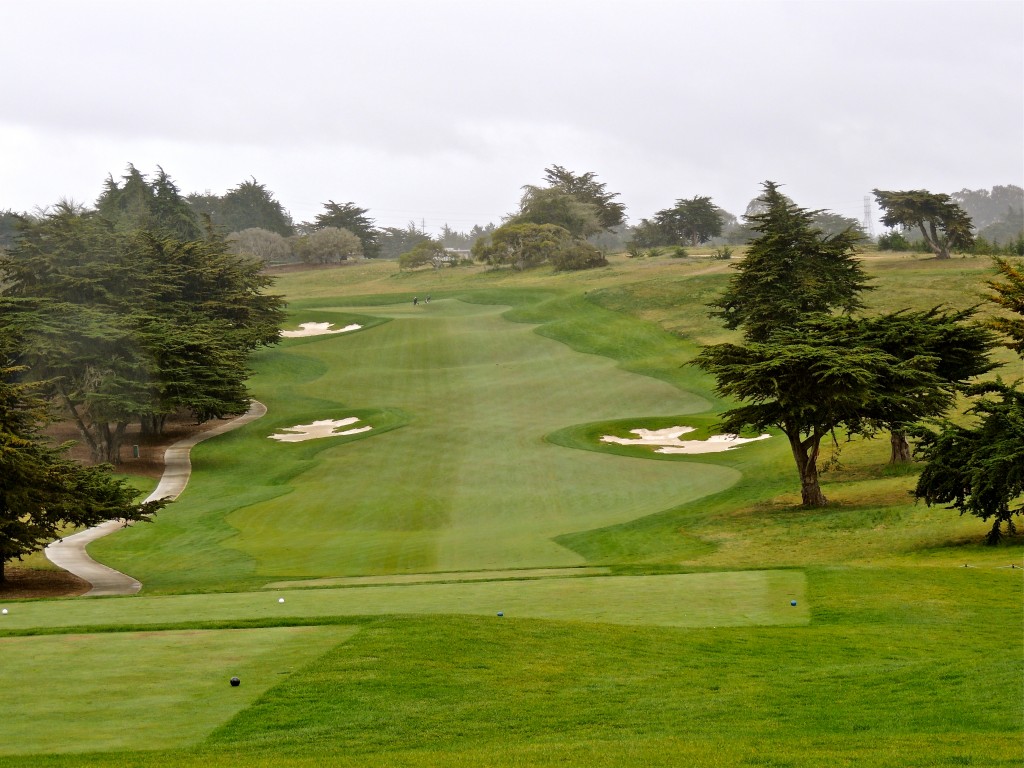 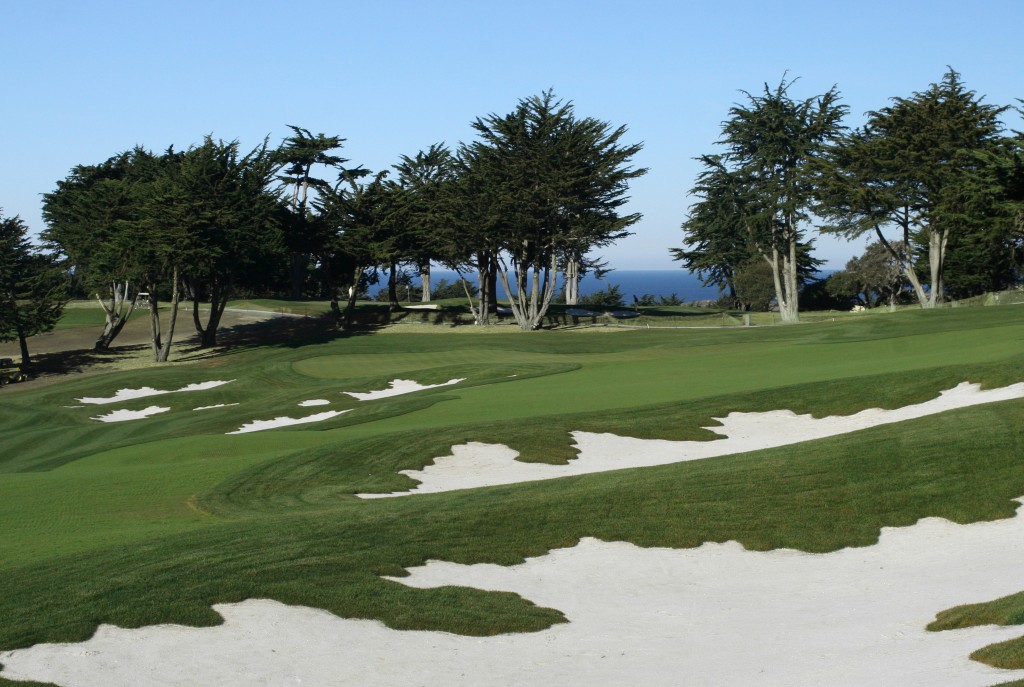 The 365-yard 3rd hole is the shortest par-four on Bayonet, but nothing to be taken for granted. (Photo courtesy of Julio Rodriguez.) 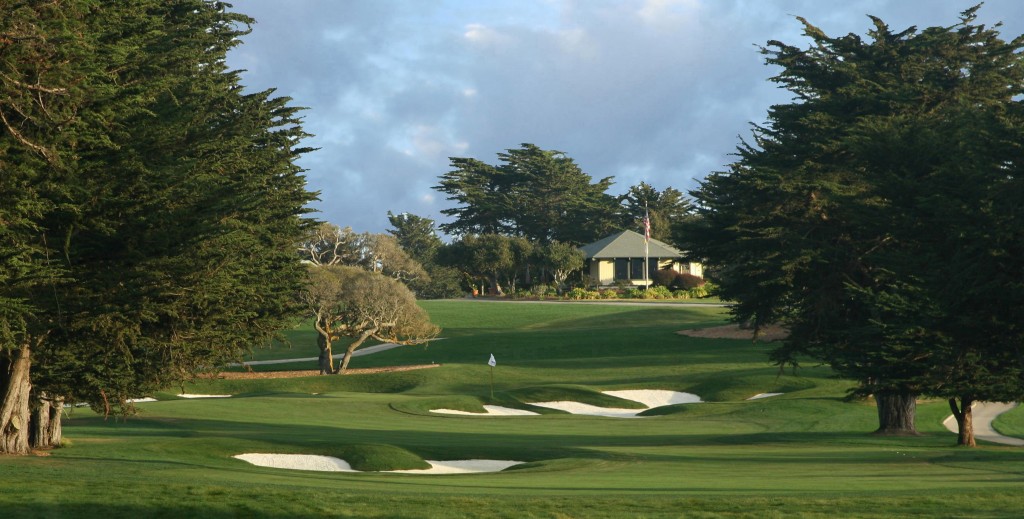 The par-five 8th on Black Horse is a mine field of bunkers. (Photo courtesy of Julio Rodriguez.) 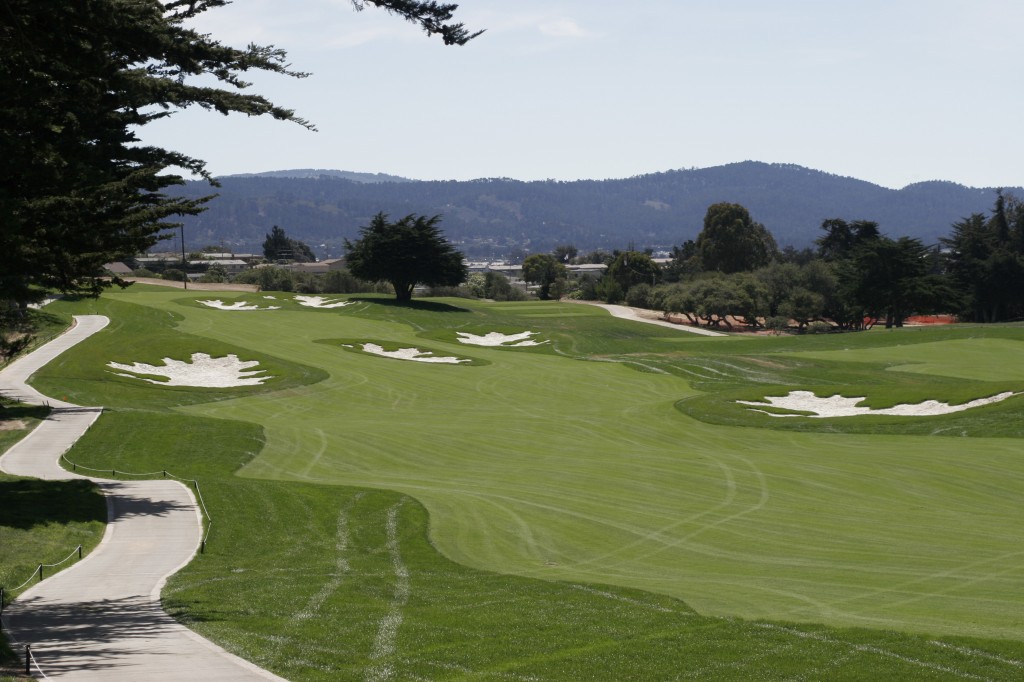 In any sort of weather, the golf doesn’t get much better than at Bayonet Black Horse! 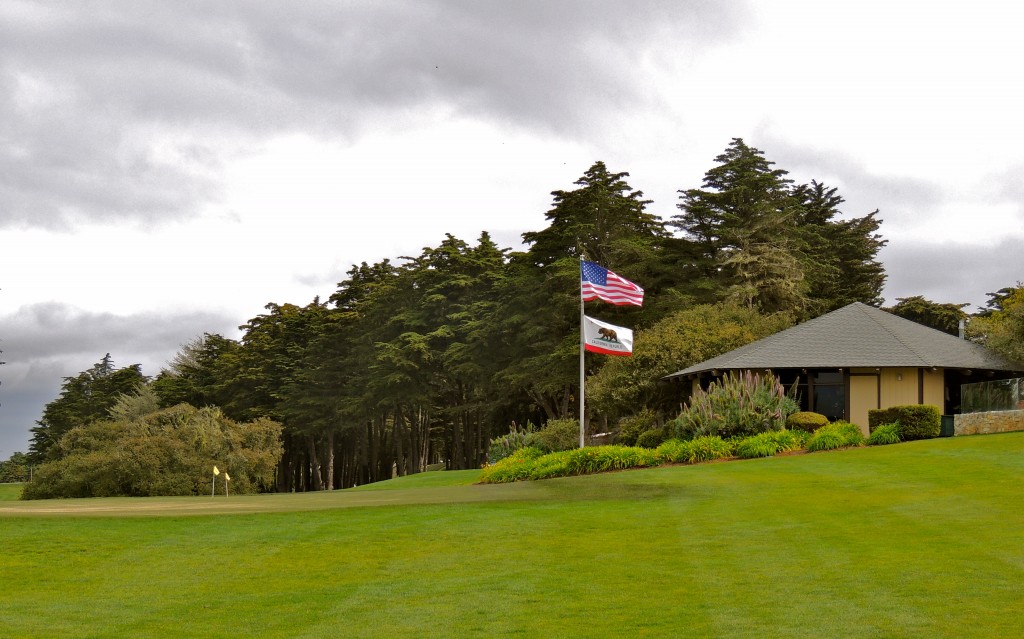