How about this for an environmentally friendly way to clean out the brush on your golf course?  One of Northern California’s golf course gems, Santa Cruz’s Pasatiempo Golf Club, has just enlisted the help of nearly 200 bearded goats to help clean out the brush and debris in their canyon areas as part of their restoration process.  Call the operation “Landscape Goat.” 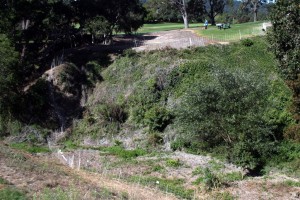 People working on the steep canyon slopes is a dangerous and cumbersome operation at best, but an easy day in the park for goats. Instead of deploying the traditional maintenance techniques of heavy equipment, noisy chain saws, and chippers, which are irritants to all, Pasatiempo is using this bearded brigade to quietly and effectively clear its steep canyon slopes on its back nine.   What’s more, our four-legged friends will be able to completely eradicate some species of vines in the canyons, thereby reducing the need to spray harmful chemicals that can irritate golfers and maintenance crews alike.

Always considered one of the best courses in America that admits limited public play, Pasatiempo has thoughtfully embraced a restoration process that has restored the look and feel of the layout to its original Alister MacKenzie lines.  In the past few years, the Club brought in one of today’s premier golf course architects, the team of Tom Doak and Jim Urbina, who cleared out at least one thousand trees and restored the bunkering to its original shaping.  They have succeeded in opening up the attractive vistas on the site making a great course play and look even better – and closer to the ideas set forth by its architect Alister MacKenzie.

Pasatiempo Superintendent Paul Chojnacky is continuing this restoration effort. “I’ve been looking at old photographs (from the 1920s and 1930s) of the property over the past two-and-a-half, almost three years that I’ve been here, and the ruggedness of this area, especially on the back nine, was pretty extreme … The goal is to get back to that,” said Chojnacky.

Here was the other issue.   Previously, the maintenance crew would go down into the canyons to clear out pampas grass and invasive species, but they could only cut so far into the formidable terrain.   Whatever material they could clear out would have to be hauled up out of the canyon and put into big brush piles, and another company would then have to be hired to cut it into chips.  Said Chojnacky, “No matter how hard the crews worked, everything would just grow back each spring, “so it almost looked like we hadn’t done any work there at all. It was a rather frustrating schedule.” After pondering the situation, he discovered Brush Goats 4 Hire and contracted the company.

But what about the cost and time issue?  Chojnacky had done his homework.  He estimates that the cost of the goats to clear an acre is $1,250, but the cost of having a crew do the same work, even disregarding the environmental cost, inconvenience to golfers, and dangers posed is $10,000 per acre.  The goats will take approximately ten weeks to clean four separate areas on Pasatiempo’s back nine whereas human crews would pose a four-year project.  This type of “thinking outside the box” wins on all fronts.

Brush Goats 4 Hire is the husband-and-wife operation that belongs to Ian Newsam and Lorraine Argo, a 3-year-old company based out of Buellton, California.  In addition to the roughly 170 goats, they also brought along two Anatolian shepherd dogs — code named Killer 1 and Killer 2 — to guard their charges from the predations of mountain lions and coyotes.  According to Newsam, the goats eat between 5 and 10 percent of their body weight each day, and are presently contained in an approximately two-acre area lined by a solar-powered electric fence, whose 10,000 volts also serve as a deterrent to any predators.

So how is the cloven-hoofed cavalry doing?  In the short time the goats have been grazing, they’ve cut down so much of the overgrowth that the individual peaks on the hills now can be seen as they once stood in historical pictures.  According to Chojnacky, “You can already see in less than a week what they’ve done, and it would take us months to remove all that material and then having to haul it off. Plus, we’d have to go down there and spray chemicals, and we don’t want to have to do that, either.” 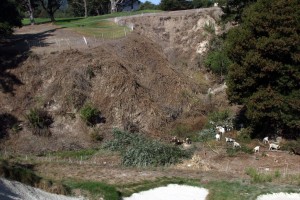 Goat progress after only a few days on the 18th hole!

Maybe this all proves that innovation is not always about advanced technology, but simply making better use of what we already have.  And I for one cannot wait to again relish my next round at the “even better” Pasatiempo.