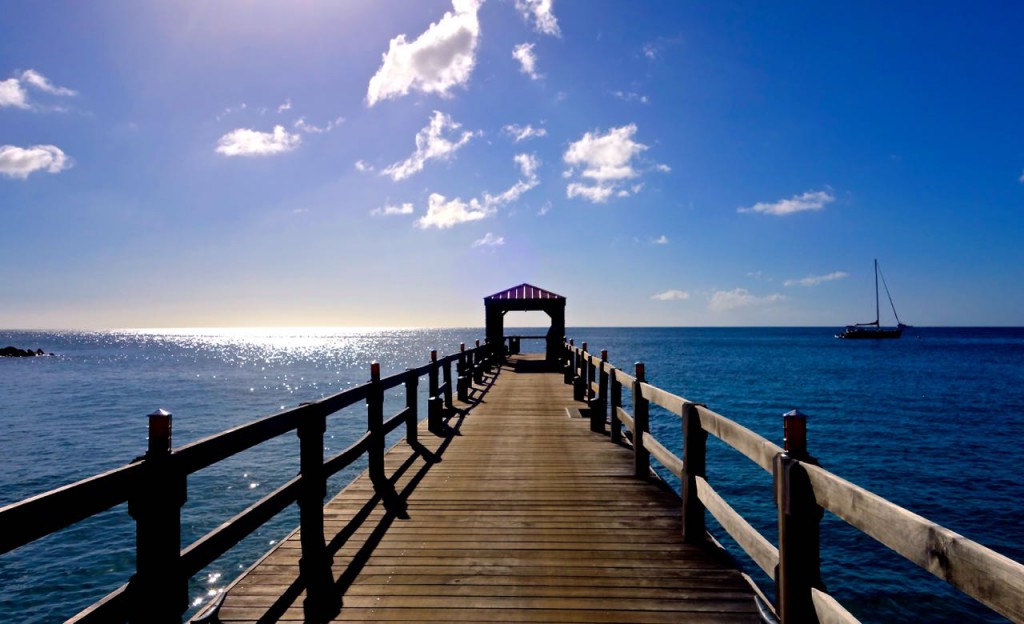 Your golf adventure on Nevis will likely begin and end with a stroll on this dock. Kind of sets a nice mood doesn’t it?  (Photo by Robert S. Fagan)

To my delight, the golf course at Nevis’ Four Season Resort snuck up on me as it was completely undersold. What a magnificent surprise! 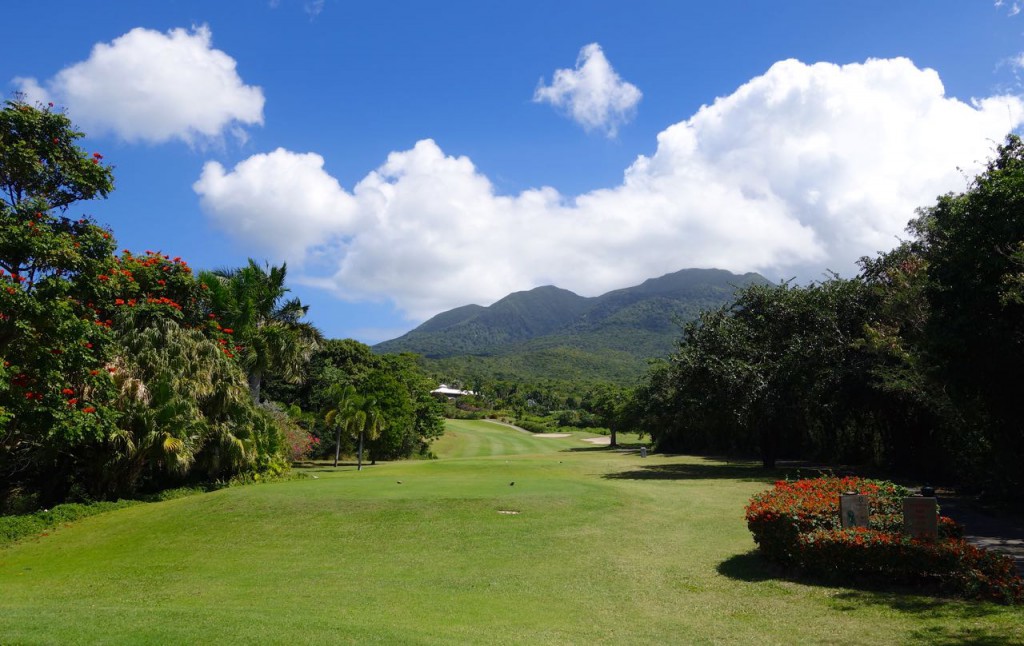 Toward or away from the water, the views are pretty spectacular as illustrated by the uphill, par-five 8th.  (Photo by Robert S. Fagan)

My friend Robert Trent Jones Jr. designed the golf course at the Four Seasons Resort – Nevis. Knowing Bobby as I do, he likes to engage the golfer in a game of outdoor chess. Here Jones wins – at least on the your first trip around this thoroughly engaging layout. Time after time I witnessed my powerful playing companions succumb to Jones’ game of cat and mouse. Often we found that a driver or strong fairway metal off the tee drifts on the firm, fast fairways right into trouble or completely out of play and many putting surfaces appear to putt uphill. Cautionary placement easily trumps even well-directed power here. The Four Seasons Resort golf course abounds with local knowledge. 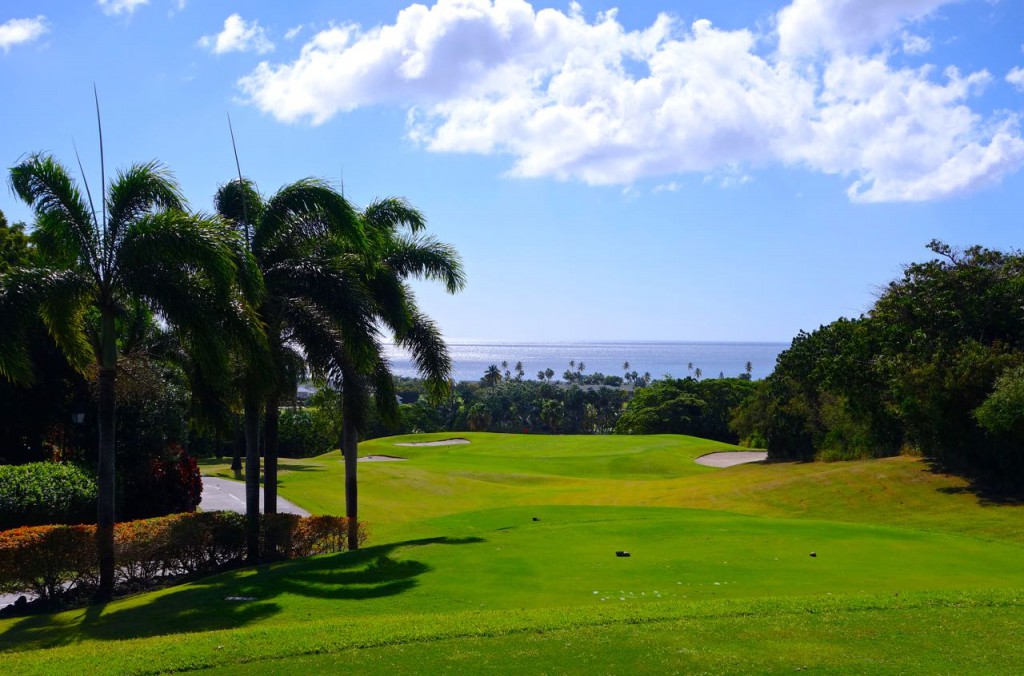 The 17th is just one of many shots directed toward the Caribbean in the distance.  (Photo by Robert S. Fagan)

First, I discovered the conditioning was excellent throughout with several of the putting surfaces being “championship fast” and the fairways beautifully manicured also running firm and fast. The course meanders with some 400 feet of elevation change under the benevolent shadow of the dormant volcano, Nevis Peak, that towers some 3,232 feet above the Caribbean. The views in any direction and on every hole are a delight to behold. 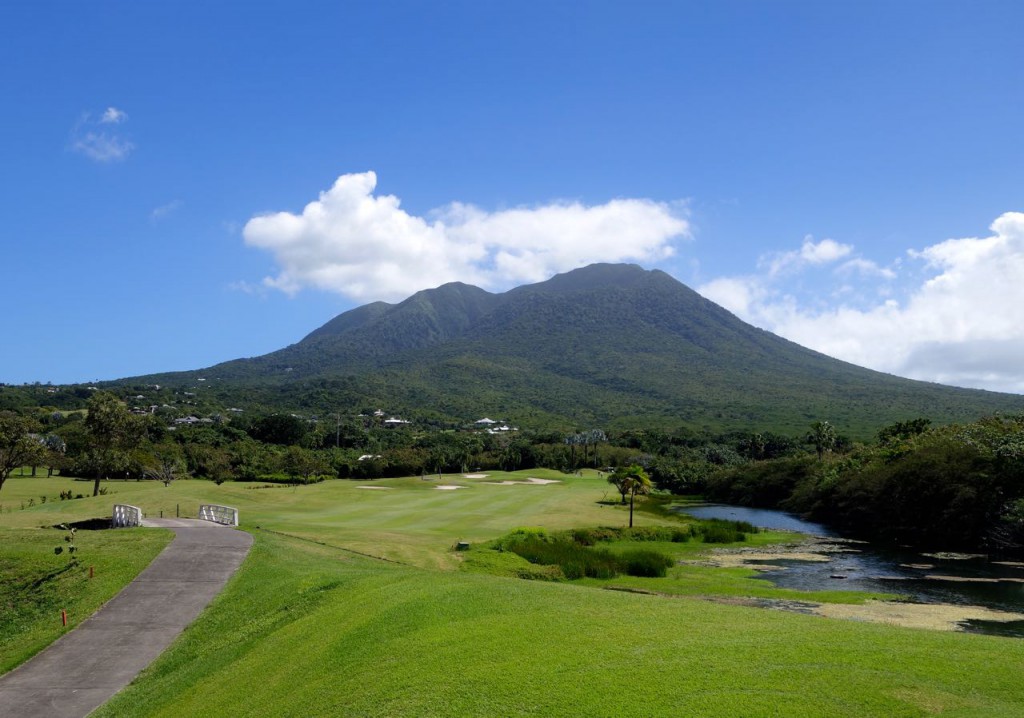 You must position your tee ball well if you hope to score. This includes not only left-right accuracy, but not too short or not too long either. Shown above is the par-four 5th.  (Photo by Robert S. Fagan)

Getting back to Jones’ playing strategy, neither I nor my experienced playing partners adjusted quickly enough to laying up off of tees and paid dearly with lost balls following wonderful strikes. As I’ve remembered Jones saying and doing elsewhere, he protects par by effectively limited the distance a strong hitter can or should play. With many changes in elevation, the first time around the golf course, it is particularly tricky to gauge where tee shots may finish distance-wise. Suffice it to say, a hybrid or iron to a flat spot off the tee sets up playable approaches whereas longer tee shots will trundle into trouble or leave the golf course as they roll out. Anyway we wasted many a well-struck drive only to find it lost or unplayable. Interestingly, the course sets up nicely for shorter hitters allowing them to hit their normal clubs and roll the ball around for the most part. 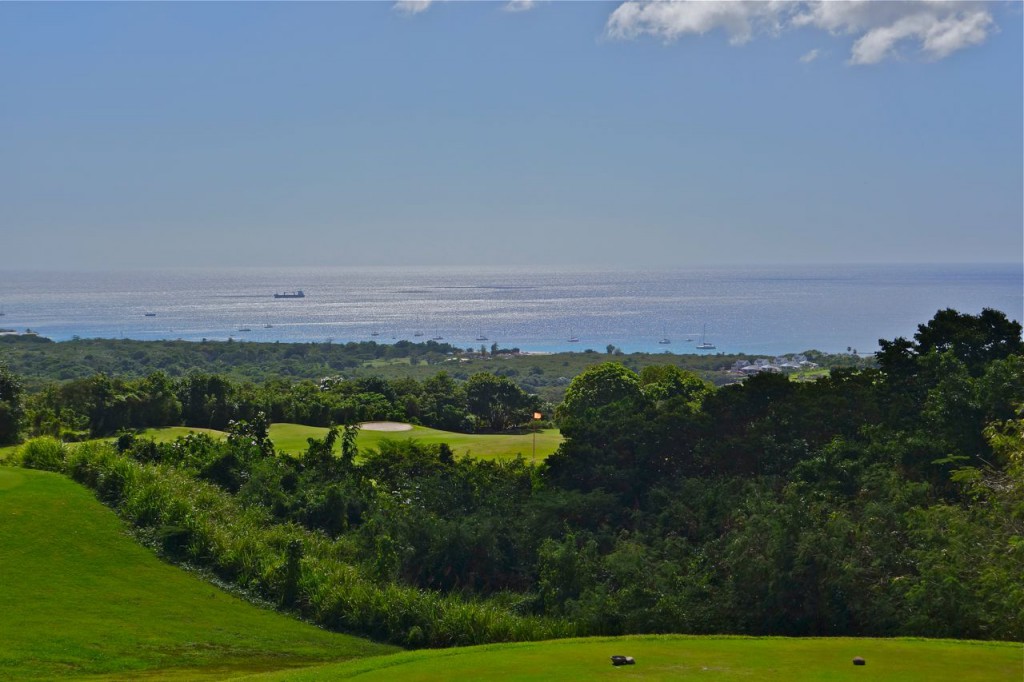 As you can tell by the direction flag on the right, the 15th is a confusing tee to figure your line of play the first time or two. Big hitters will wisely lay-up off the tee on the long, downhill 15th where even well-positioned shots may likely run off into the jungle. From behind the green, it reveals just how narrow the hole plays.  (Both photos by Robert S. Fagan) 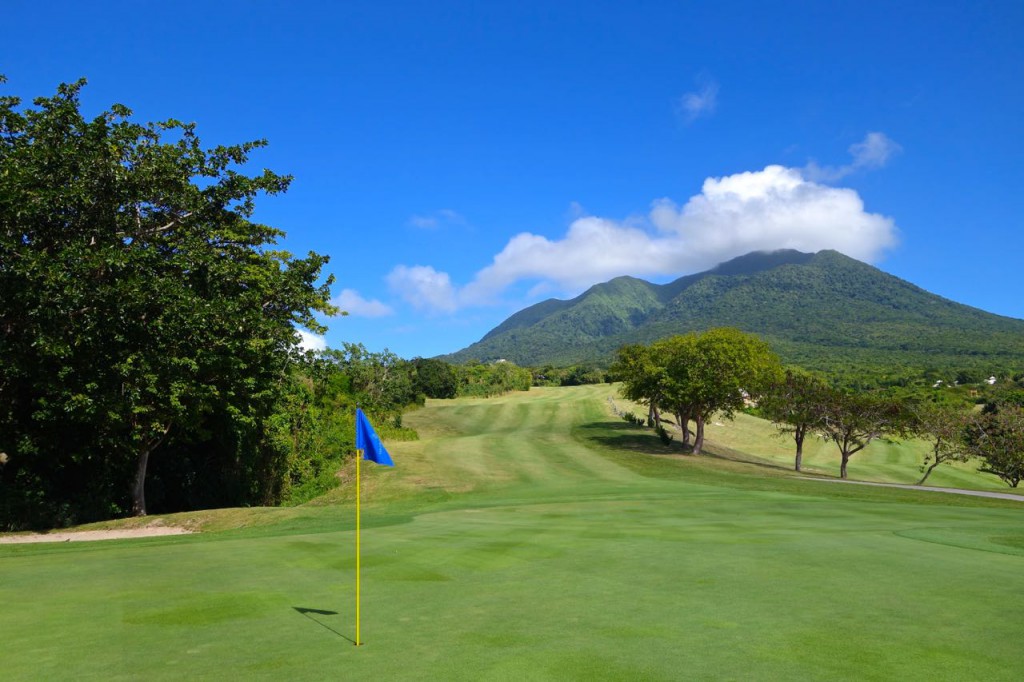 The diabolical putting surfaces were something that I more quickly figured out. Because of the slope from the volcano is so strong toward the water and to the west, the grain also grows that way as well. Secondly, putting contours look as if they are breaking uphill because of the visual slope influence, but between the grain and these optical illusions, I had little success convincing my friends to putt away the volcano when it looked otherwise. To our chagrin, I was unfortunately correct time after time. 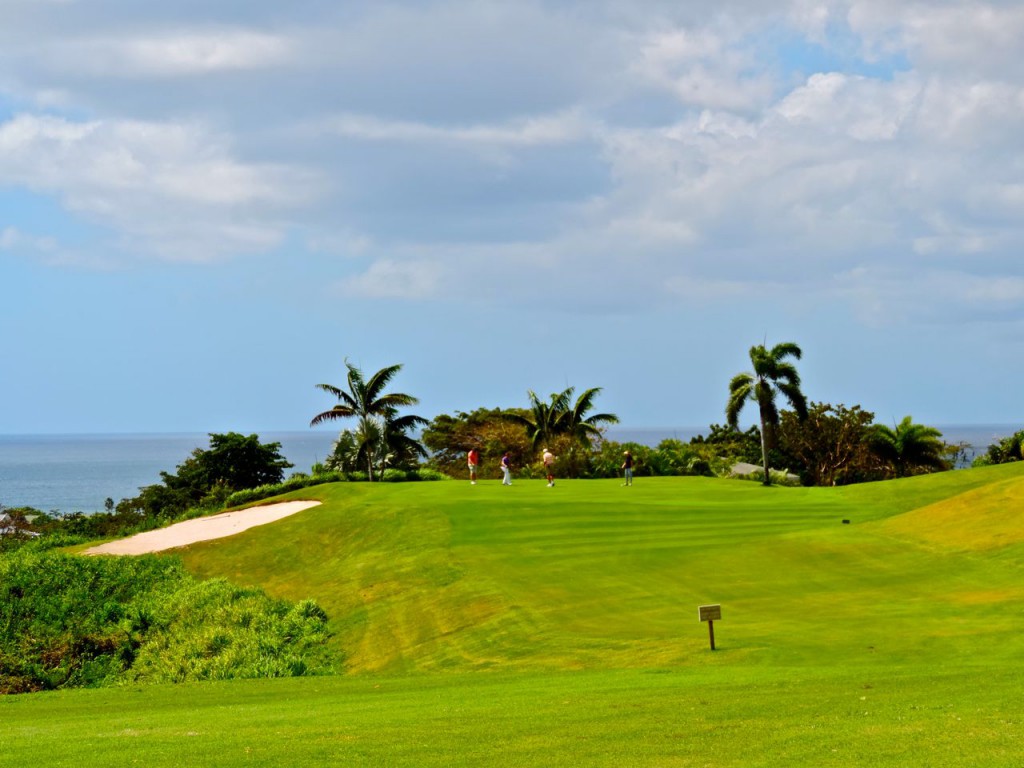 The term “verdant green” more than aptly describes the Four Seasons Nevis Resort and with the well-attended flowering scrubs and plants makes for a most attractive trek or visual in any direction. Golfwise, the par-threes are the strongest group, but the par-five 15th that at 663 downhill yards plays far shorter and par-four finisher are the memory makers. The 15th may require less than a metal off the tee while the powerful straightaway 18th is a most challenging climax. From the slightly elevated 18th tee, trouble lurks left and right on the flattish fairway that casts the Caribbean beyond the slightly elevated putting surface. It is part intimidation and mesmerization – the perfect conclusion to a garden-type golf course that will have you enjoying its 360 degrees of views together with an intriguing test of golf – far more than meets the eye. It fulfills the definition of excellent resort golf – playable, beautiful, well-maintained, and interesting for all. For these reasons, I confidently count the Four Season Resort Golf Club at Nevis as one of the premier layouts in this part of the world and one you should want to play!

Above and below:  Trouble on both sides with perhaps a breeze together with an approach shot into a slightly elevated, large contoured putting surface make for a demanding par-four at the finishing hole.  (Both photos by Robert S. Fagan) 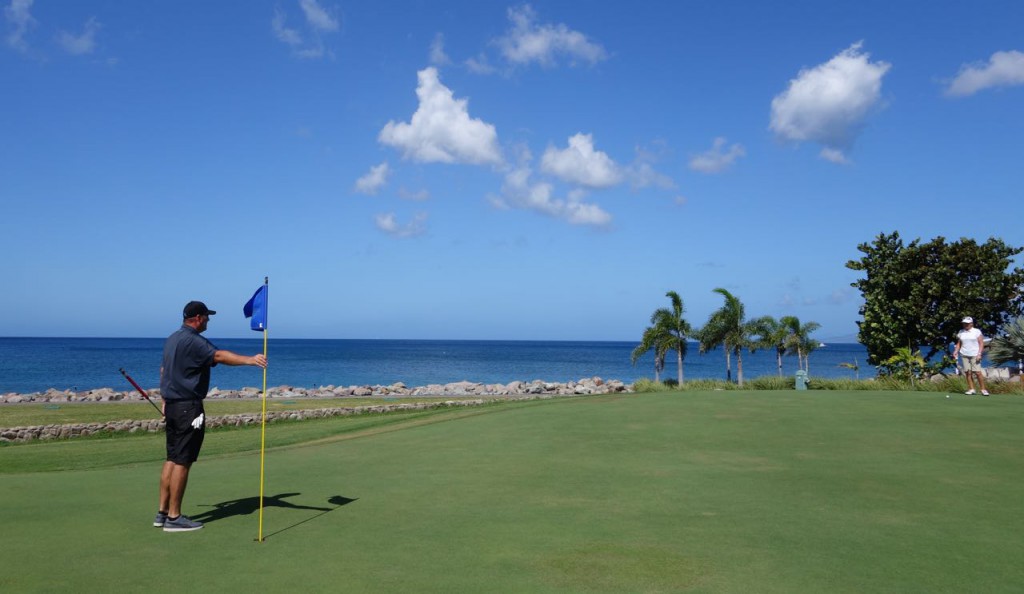