Many resort courses fail to live up to their hype in my opinion.  The Punta Espada Golf Course at Cap Cana in the Dominican Republic does, and then some.

Opened in 2006 and designed by Jack Nicklaus, the Champions Tour plays there.  Having watched several editions of the tournament on television, my first reaction is that this is another over-rated oceanside layout with little more than good conditioning to recommend it.  Well, television doesn’t come close to doing the layout justice.  Quite frankly, it nearly blew me away – I was so very impressed.

First of all, there is much more movement and elevation change within the property than I had imagined.  Secondly, the conditioning is absolutely superb with the putting surfaces as smooth as any I’ve ever encountered.  If you can’t hole putts here, there is no hope for you.  Thirdly, Jack Nicklaus’ routing uses the ocean as a hazard on both the left and right sides, and the ebb and flow of the layout is masterful.  Next the inland holes are quite interesting in themselves and the building anticipation is fun.  Finally, the layout possesses many good and outstanding or memorable individual holes.  The first one is a great starter hole with the rock croppings beyond the green and to the left.  The second is simply a superb risk and reward par-five.  The second, seventeenth, and eighteenth holes have the ocean just steps away to the right while the twelfth and thirteenth enjoy it to the left.  And several of the holes are built so close to the ocean that the ocean spray will touch you.

While there course is heavily bunkered, Nicklaus has built grand fairways so most players will seldom be hunting for balls, and the putting surfaces have no exaggerated contours.  In other words, the test is playable and resort-friendly with the distance ranging from under 4,500 yards to about 7,100.  That doesn’t mean that it is easily, especially when the breezes pick up.  The par-three thirteenth is truly one of the toughest holes I have ever encountered despite the bailout area to the right and the oversized putting surface.  From the tips, it may be too severe even for the professionals, especially if it is playing downwind as the green falls away from and is semi-blind from the tee. 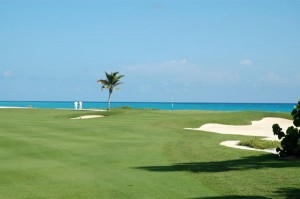 The approach to the short par-4 seventeenth at Punta Espada.

It is almost like comparing apples to oranges, but in my opinion Punta Espada rivals Pete Dye’s Teeth of the Dog for the crown jewel of the Caribbean.  The scenery is simply spectacular while also being eminently playable.

Fagan Rating –  A-. This is one of the best golf courses in the Caribbean or Central America, one of the best resort courses in the World for that matter, and a definite must-play.  Architecturally interesting, I would also rate it very high within the Nicklaus collection though it is not set up as a champion style layout.  Punta Espada is a rare course I could enjoy playing every day!