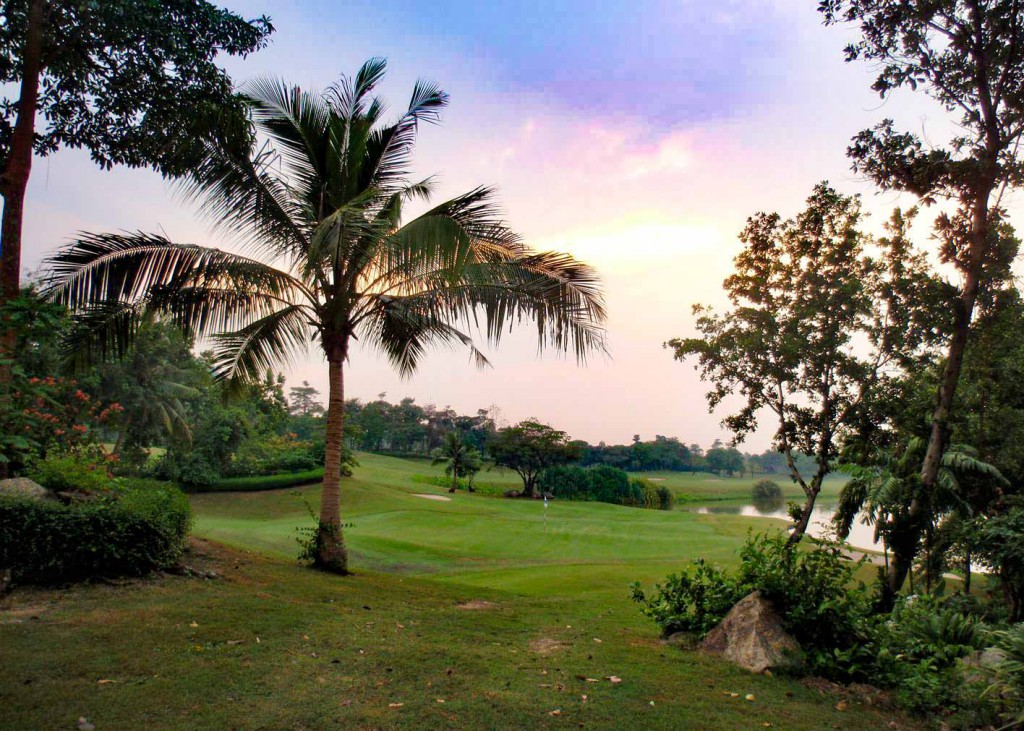 A view from behind and aside the par-four 3rd hole on the Valley Nine that requires a forced carry over water. This nine at Laem Chabang is big, bold, and beautiful – one of the more demanding in Thailand. (Photo by Robert S. Fagan) 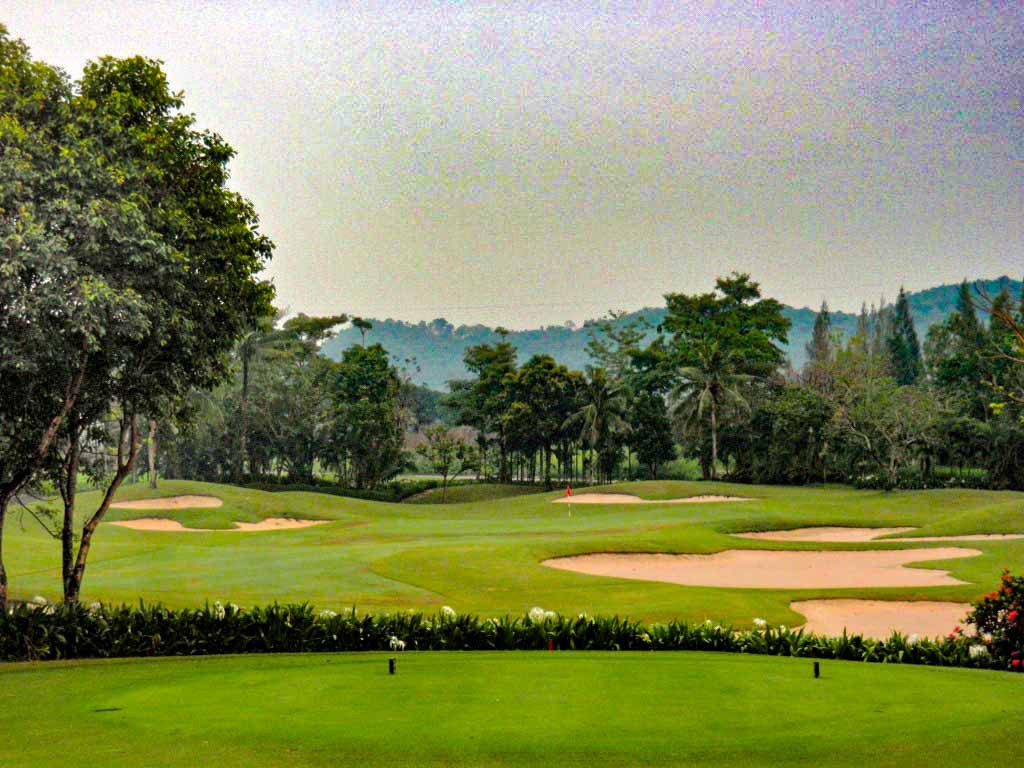 Above is the 205-yard fifth on the Valley Nine. (Photo by Robert S. Fagan)

The Laem Chabang International Country Club is a 27-hole facility designed by Jack Nicklaus in the Pattaya area of Thailand.  It occupies a gorgeous hillside setting from which each of the three nines depart and return. The Mountain and Lakes Nines combine for the most homogeneous 18-hole combination. The scale and surrounds, and perhaps most of all, the challenge seem to fit each other. The third nine, Valley, however is the best, most formidable test of golf. It’s flat, valley setting contrasts its sister nines, but it features lots of water and is nearly a whopping 200 yards longer than either. This entire facility plays down mounded lush tree-lined corridors that are relatively wide, but venture off of them and you will have big problems.  There are lots of bunkers, big stylish ones, but the sage play is away from them. 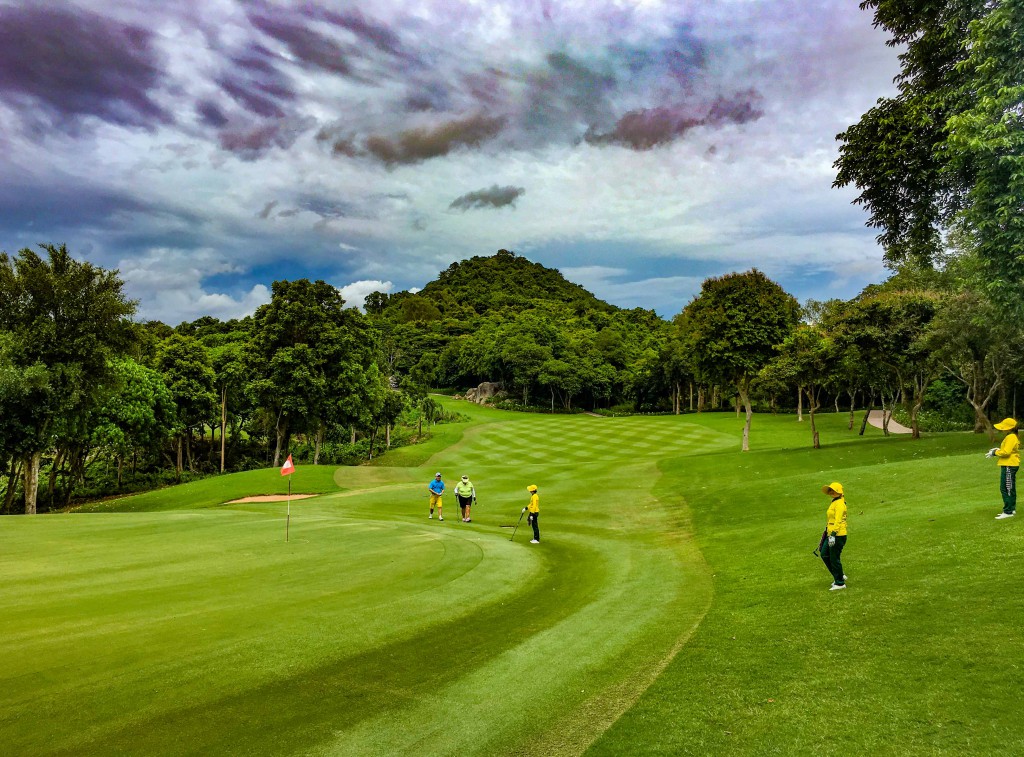 The first green above and the 9th tee below both illustrate the mountainous, hillside jungle that the Nicklaus organization earlier and golfers today face on the Mountain Nine. (Both photos by Robert S. Fagan) 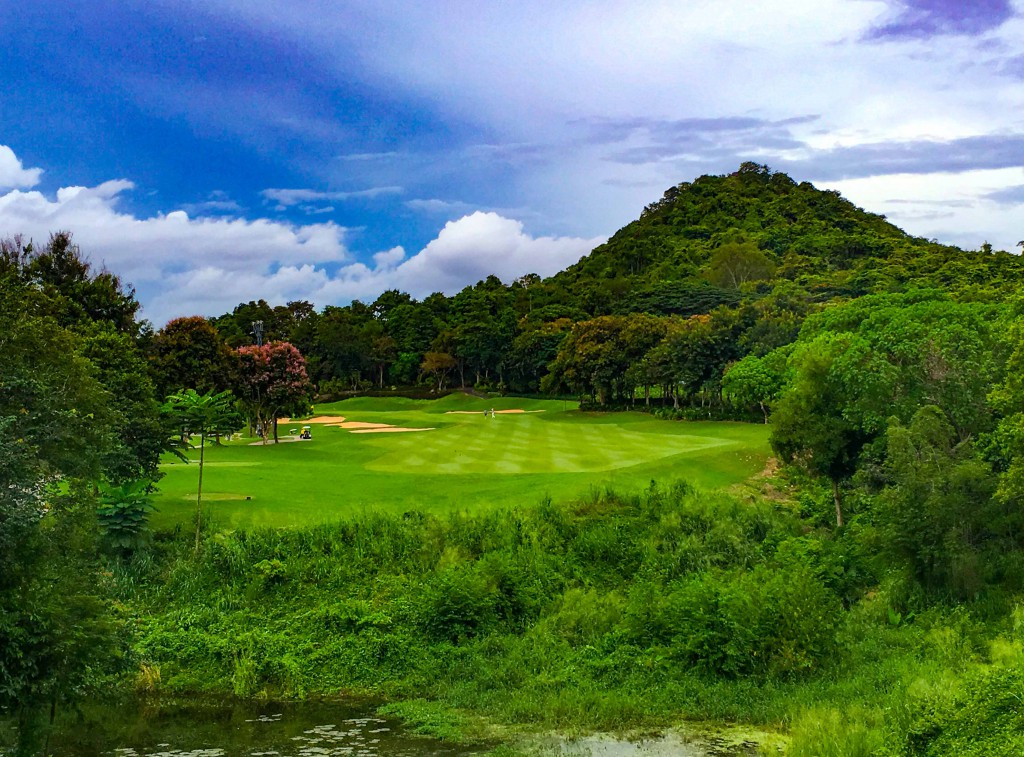 The Lake Nine was my first introduction to night golf under the lights in Thailand and the Laem Chabang was the first in the Eastern Seaboard region of Thailand to have nighttime golf. Quite frankly playing the Lake Nine in the dark under the lights made an evaluation just a bit more difficult. Though I happened to break par that night, it was a challenge playing in the shadows and judging distances. Fortunately, I was recently able to revisit the course and found the Lake Nine solid with some gentle elevation changes, generous landing areas, and dangerous bunkering in the Nicklaus style. The 441-yard 6th hole is easily the most challenging on the Lake Nine as water limits the length of the tee shot and then the putting surface is set adjacent to the lake. 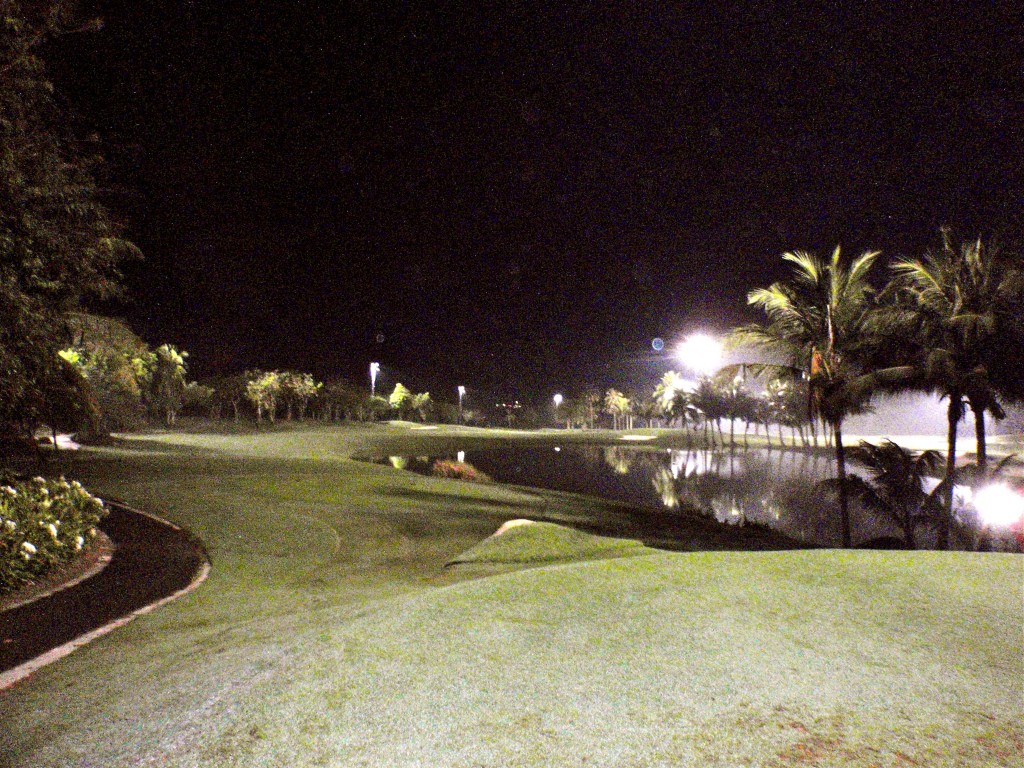 This  is the par-5 second hole on the Lake Nine at Liam Chabang under the lights. (Photo by Robert S. Fagan)

The Mountain Nine as its name suggests plays more into the side of the mountain and thick jungle. Its elevation changes are more pronounced and the ball is lost if it lands far off the fairway. For me, the Mountain Nine is the most visually stunning with more than a few holes that will have you scrambling for your camera. Together the Mountain/Lake Nines combine for a demanding test almost reaching 6,900 yards from the tips.

As attractive as that combination is, it is the Valley Nine that really grabbed my attention. The Valley Nine provided a “Wow!” for me. At 3,619 yards, it dwarfs its two sisters and most of the holes either feature water prominently or an array of bunkering. After a stout 438-yard gently downhill opener, the second through eighth holes play in a flat valley basis with several holes bordering a large lake.  The holes played relatively narrow and the greens are fairly small and low level making Laem Chabang Valley unquestionably a “shot-maker’s course.” The stretch between the second and fourth holes set the tone that in order to score here you must really strike some good shots. Manicured and appearing more like a Japanese garden with an array of beautiful flowering fauna, a comparison to Augusta National or Muirfield Village comes to mind. The green sites at Liam Chabang are sensibly not busy, but fast and true, and the look is lush and confined – a genuine garden spot. 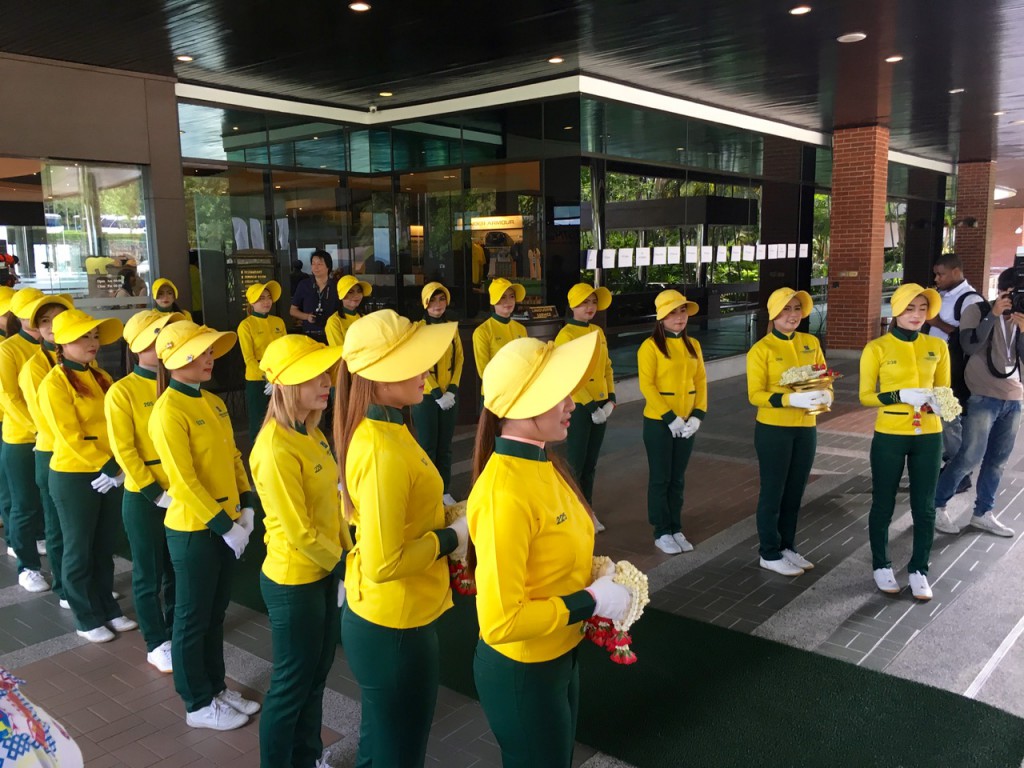 The Club also has a 40-room Lodge and a newly renovated, spacious clubhouse that features every important amenity and can easily host tournaments and outings. The conundrum at Laem Chabang is that you should play all three nines, but if you are more of a novice, the Mountain/Lake combination should do just fine. Laem Chabang could easily be mistaken for any high-end resort golf complex in the United States. I have to admit that I was a bit surprised that I had not previously heard more about Laem Chabang – maybe due to the fact that it is so far away in Thailand with a different sounding name. The shaping, routing, and strategy of this lush jungle layout make for a really excellent golf experience comparable to the best I’ve played in Southeast Asia. Playing here was a most pleasant surprise for and I cannot imagine anyone not enjoying their time here at Laem Chabang – a very solid and attractive Nicklaus production! 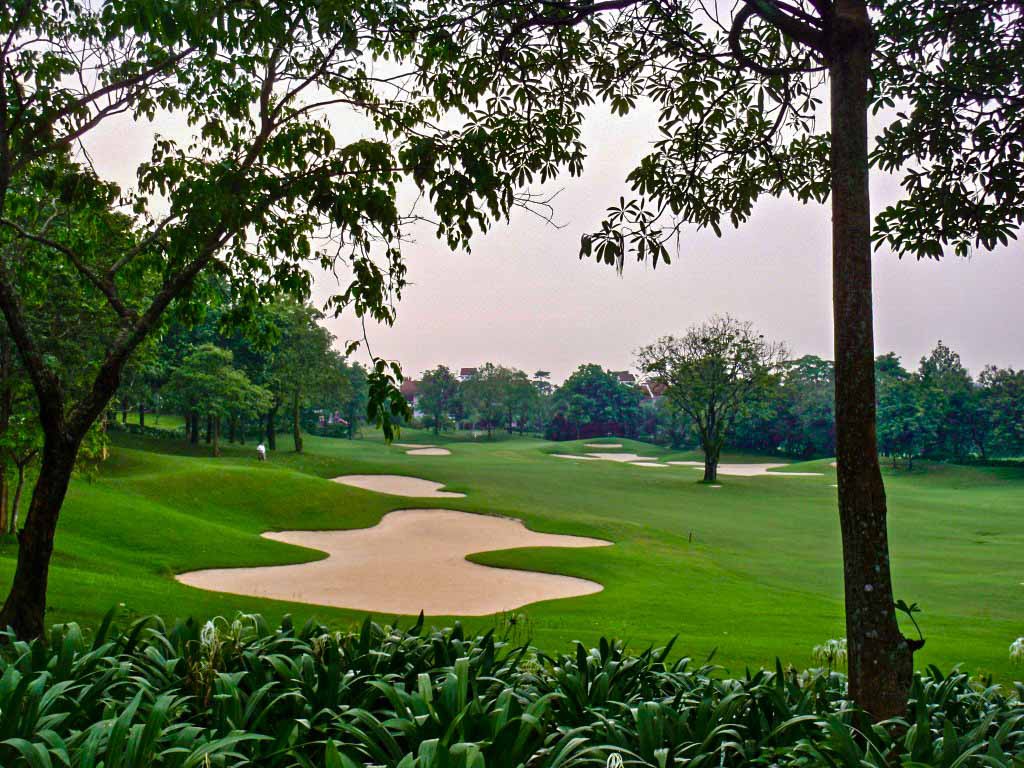 Above:  Here is the par-5 sixth hole on the Valley Nine. (Photo by Robert S. Fagan)

Below:  Looking back up the first fairway of the Valley Nine. (Photo by Robert S. Fagan) 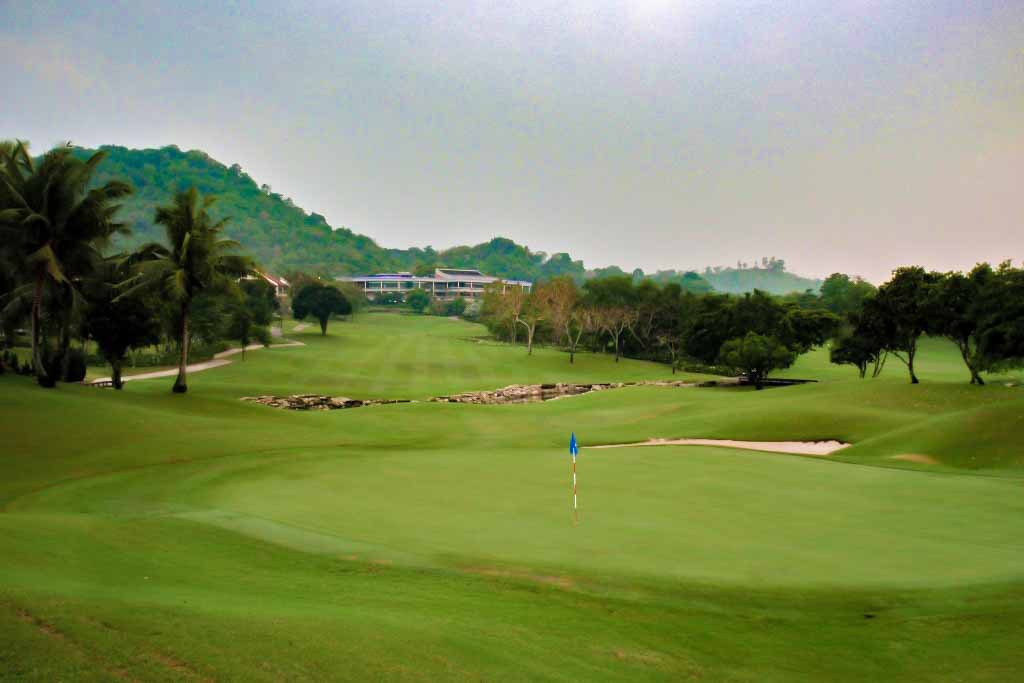