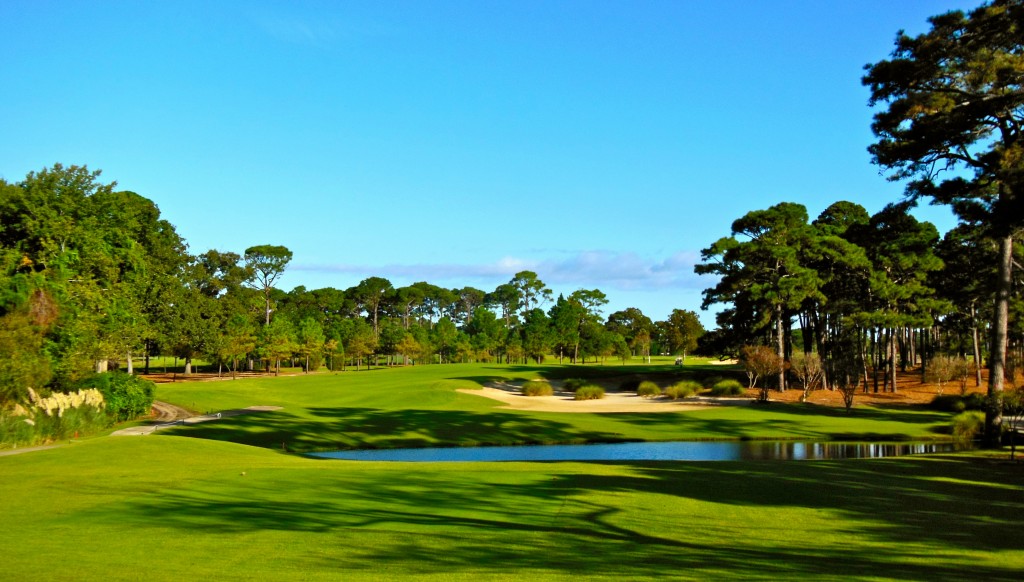 A pond, waste-bunker, and trees set the tone to the short dogleg-right, par-four 15th at Pine Lakes.

I first played Pine Lakes Country in Myrtle Beach, South Carolina in 1965 and revisited it for the first time today. It was the first golf vacation I ever took with my parents and my 82-year old friend George Thorpe, Jr. Suffice it to say, my memories of the holes were starting to fade. We played it in March when the Bermuda was dormant grey and overall the layout was a bit scruffy. I remember that the idea for the Sports Illustrated Magazine was hatched here and that this was the oldest course in The Grand Strand. There were only two other layouts, the Dunes and the Surf and it would more than twenty years before the second course, The Dunes Golf & Beach Club, would be built so the moniker “The Granddaddy of The Grand Strand” certainly proves true. More than a hundred new golf courses were to be built over the next thirty-five years. How would today’s Pine Lakes golf course compare with that of yesteryear? Would today’s version still qualify as the illustrious Granddaddy or would it be ready for golf’s nursing home? 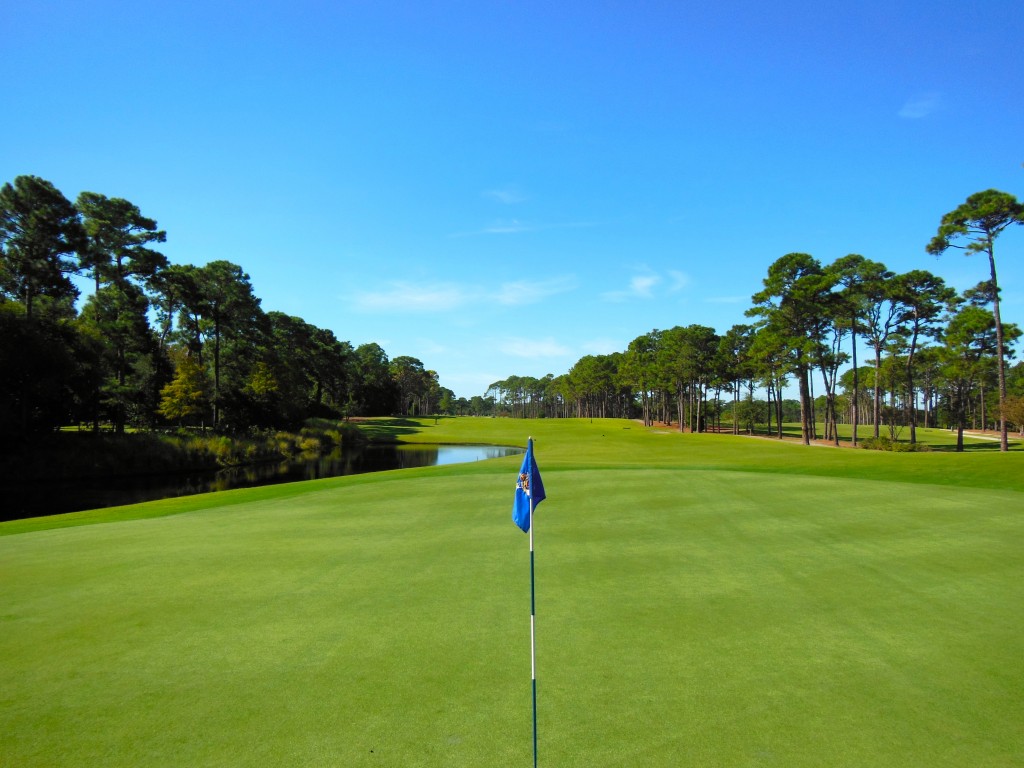 Against any breeze, the par-four 3rd hole is the toughest at Pine Lakes.

By definition a classic of any kind holds its value and is as beautiful and viable with age. That term applies to the Pine Lakes Country Club. Built in 1927 and barely able to survive the Great Depression, this Robert White-design test is even more memorable and certainly enjoyable than I remember it. Part of the reason is the Pine Lakes was renovated in 2006. While care was taken to carefully return the design to White’s drawings, two new holes (4th and 5th) were added to replace the old 17th and 18th holes. I am not really convinced that they are that much of an improvement, but they certainly don’t detract from the layout (neither are within view of the clubhouse whereas the remainder are). Nevertheless, Pine Lakes qualifies as a repolished gem. And as golf course maintenance is now much more advanced, the conditioning is now vastly improved. 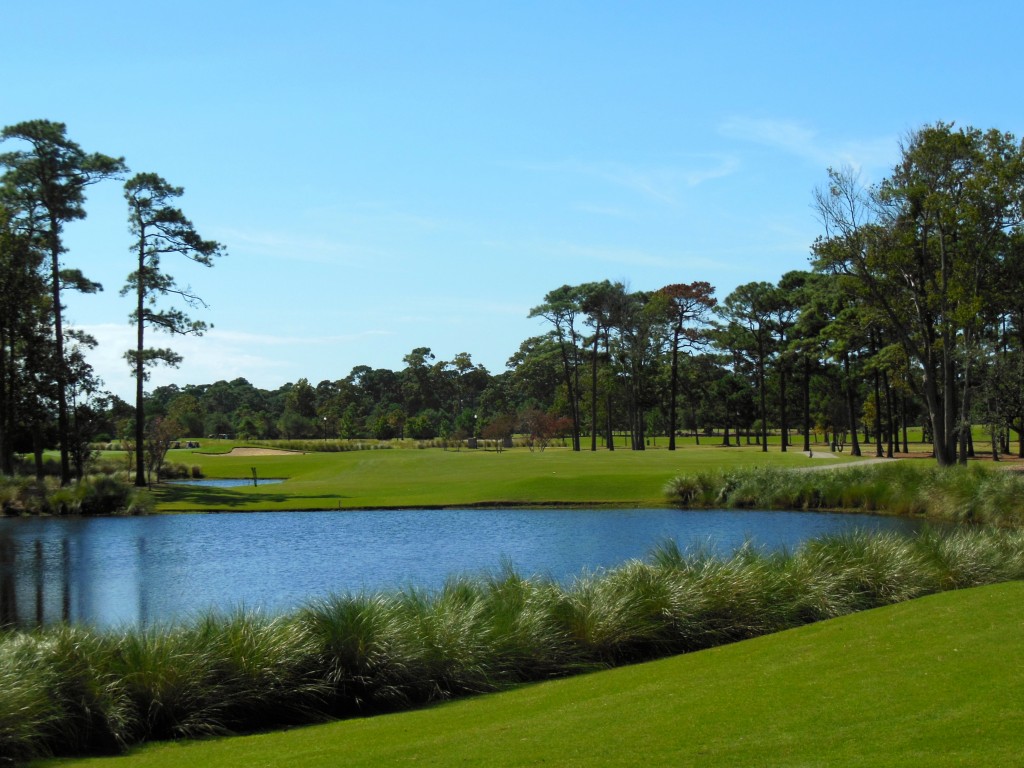 No one will ever claim Pine Lakes do be a particularly difficult course, but it does manage to keep your attention. At just short of 6,700 yards and a par-70, this is one of those very playable tests that you shouldn’t lose many balls or need to hit lofted spinning approaches into shallow elevated putting surfaces. There are several ponds to capture sloppy play, but nothing too penal. The greens were restored to their original largeness with only a few sweeping breaks and nothing too severe, while the paspalum surfaces putt smoothly with medium speed. There are many good holes, but I particularly favored the stretch between the 14th and 17th. They play through the pines and constitute a wonderful walk. Speaking of walking, the routing is easily walked though the two new holes require a bit of a hike. For the most part, the terrain is very level, and the holes feature generous avenues to push-up greens that usually invite a run-up approach. There is a bit of mounding around a few putting surfaces, but overall the look is natural and unforced – more on the minimalist side.

The transplanted Scot, Robert White, designed the course in 1927 as an amenity to the grand oceanfront hotel that the four Woodland brothers had built. Interestingly, White was the first President of the PGA of America, a co-founder of the American Society of Golf Course Architects, and built the first White House putting green. He was also credited as being among the first to apply agronomic principles to golf courses. What’s more, he was instrumental in recruiting Philadelphia golf professional and promoter Jimmy DeAngelo down to Myrtle Beach in 1948 as both became leading figures in starting the journey that led to the area’s reputation as a golf mecca. Appropriately the Myrtle Beach Golf Hall of Fame sits outside just adjacent to the classic white clubhouse. 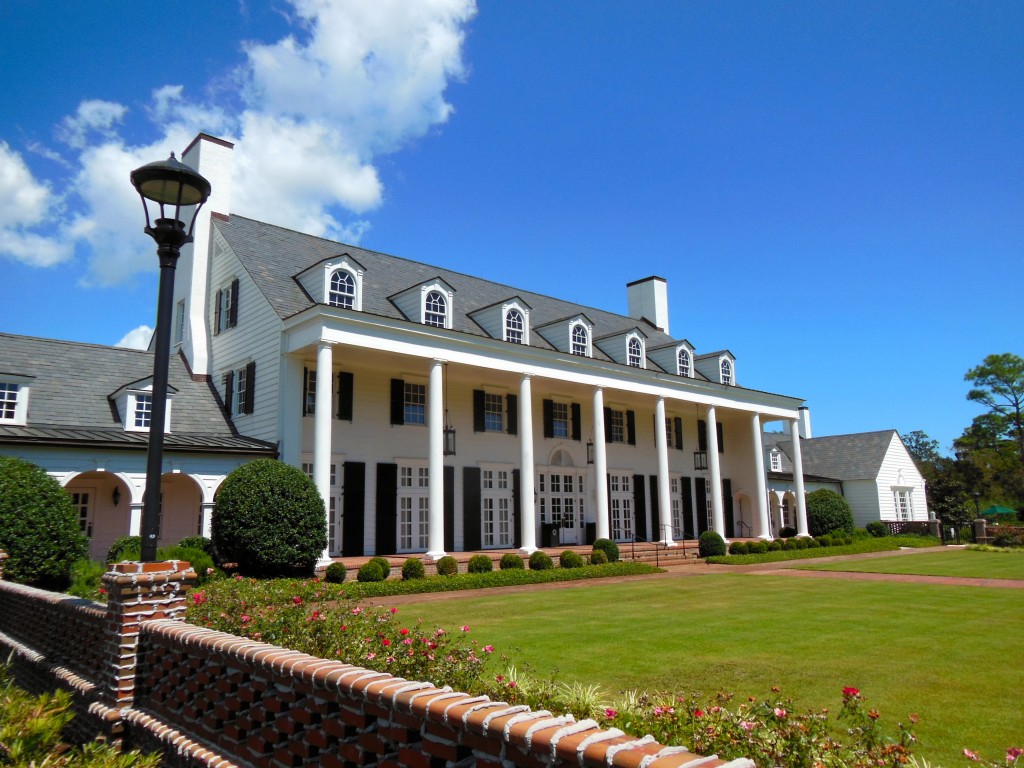 The classic ambiance of the Pine Lakes clubhouse matches the golf experience.

In an era, when some feel that more is more, Pine Lakes course is a testament to less can be more as well. Little earth was moved and White let the gentle rolls of the landscape speak for itself. The facility was built to provide an uncommonly authentic private club experience to the public as would resorts such as Pinehurst, Sea Island, the Greenbrier, Hot Springs, and only a few more. It is so fortunate that loving attention has brought back this gem to its full luster for subsequent generations to enjoy. Like the small boy that played here nearly fifty years ago, I enjoy Pine Lakes even more today. You will enjoy it too! And don’t worry, the Graddaddy of the Grand Strand is as healthy and vital as ever!

Below is the par-three 2nd hole at Pine Lakes Country Club. 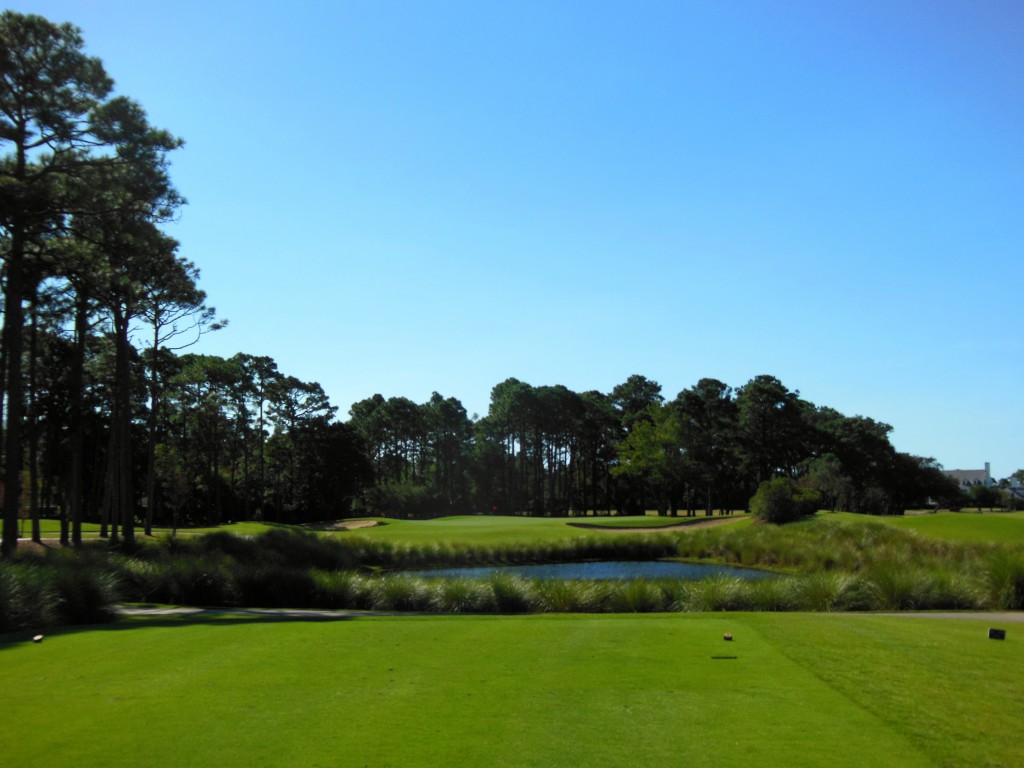