All four of the par-threes at King’s North play over water though the longest is only 190 yards from the tips. Shown above is the 160-yard 17th.

King’s North is the flagship golf course of three very good courses at Myrtle Beach National. All were designed by the Arnold Palmer organization. I first visited this busy complex centrally located in Myrtle Beach back in the late 90s and played the featured “North Course.” Other than vividly remembering the forty bunkers scattered about the home hole and the risk-reward par-five 6th, the layout was somewhat unremarkable failing to make a strong impression other than “solid.” Wow, this course has been polished up and renamed “King’s North” and it now shines! Between the time I first played here and now, the Palmer organization redid the golf course and it simply sizzles!

The Palmer designers start you off easily enough with a fairly benign par-five no different than you might find on the other two layouts here, but he then proceeds to ratchet up the look and challenge from that hole on. In fact, as you stand on the par-four 3rd hole looking over the water and gauging your line, you are in full-blown “Wow!” mode. 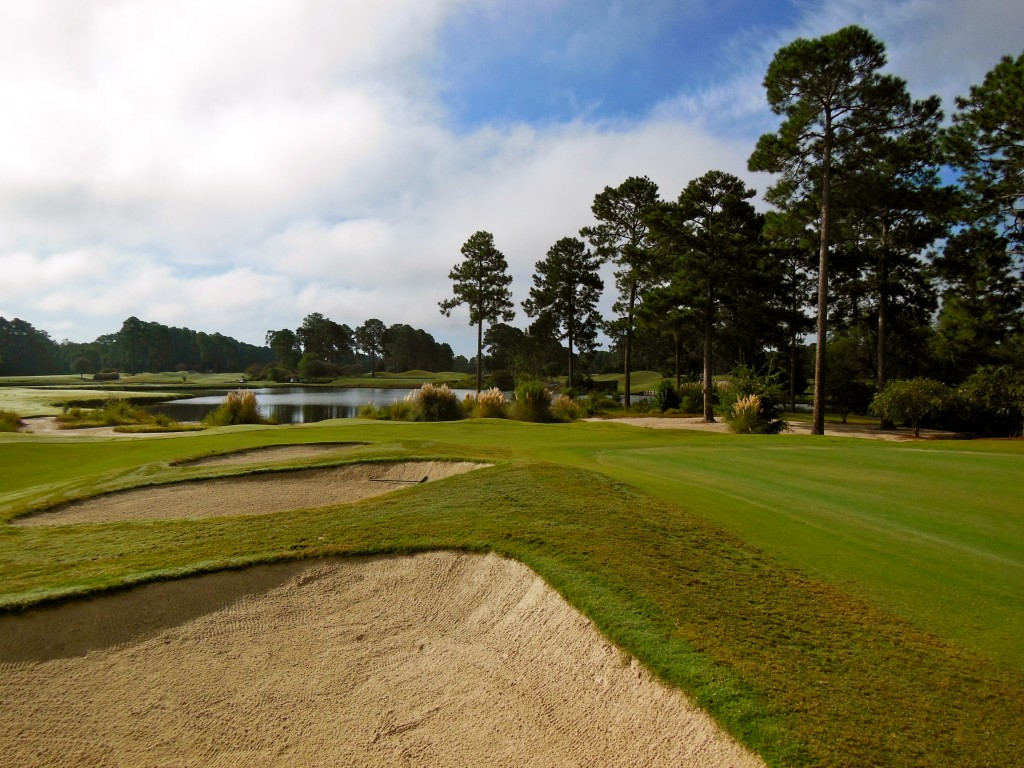 Looking back from the green area toward the tee of the gorgeous par-four 3rd hole.

People often imagine that if I play well, I’ll like the course and rate it highly. Well I played that front nine dreadfully barely making four pars (a far cry from the 66 I shot more than a dozen years earlier), and I absolutely loved the golf course. The fact that I parred the back nine was a bit of salve for my ego, but I thoroughly enjoyed every step of the round. What’s more the conditioning was very good on this busy track. Attractive waste bunkers often begin the theme on many driving holes as seen at the par-four 7th.

Whether you are a fan or not of the Arnold Palmer organization (and I am), you will find that they build a pleasant (not bland) golf course. The King’s North Course can range from 4,816 yards to over 7,000, and the test is straightforward. That doesn’t mean that it is boring or without character and strategic value. You will find no better example of this than the 6th hole. This par-five hole is nicknamed “The Gambler” and was christened by entertainer/golf course owner Kenny Rodgers. It features an island fairway that turns the hole effectively into par-four, but play round the lake to the right and it is a full-blooded 568-yarder three-shotter. The issue you face on the tee is that you must not hit your drive too far, let alone left, right or short to this island fairway. After that you still have options for you can go for the green or bail out a shorter distance to the “longer fairway” on the right. The par-four third hole is yet another example of interesting strategy. You can hit a tee shot safely to the fairway or long hitters may go directly toward the green covering more water, scrub pine, bush, and waste bunker area. Either way, the look is a veritable feast for the eye.

The 347-yard 5th hole seems innocent enough, but it features a slightly elevated shallow sliver of a putting surface and a nasty, deep sod-faced bunker with about a seven-foot high vertical face fronting it. Hit too close to the face as I did and I don’t care if you have the skills of Seve Ballesteros, you will be hitting your second bunker shot away from the hole if you ever hope to leave that pit. Looking at the approach to the par-four 5th hole (above) with that nasty bunker fronting the putting surface. Below is a side view of that deep bunker with its nearly 7′ sod wall. The par-threes all involve some sort of water hazard as do many other greens, but the carries are not severe provided you play the proper tees. Of particular note is the island green for the 140-yard 12th hole. Those greenside bunkers to the left of the putting surface are shaped as an “S” and a “C” for South Carolina. Hole after hole, you will encounter, rows of pines often adorned in season with blossoming flowers, together with subtle (not abrupt) mounding and attractively punctuated bunkering. The greens are large with many of them banked toward the front. A few such as the first and second holes do have busy undulations, but the majority are either flattish or more sweeping in nature. If I were to point out any deficiency of the layout, it’s a tiny one. There is only one ever-so-slight dogleg to the right (the 2nd). Most of the holes are either essentially straight or bend to the left. That’s not enough to keep King’s North from becoming a favorite.

I counted 16 lakes or ponds so water abounds, but the course is routed in such a manner that play can be easily maneuvered over or around the trouble. And for bunkering, the 18th hole takes the prize. I asked three representatives of the golf course how many bunkers the hole has and got three different answers. Let’s just say that you there are approximately forty of them, though the fairway is generous and many of them are out of play. Where else can the public play such a golf course? I counted 40 bunkers on the 18th hole at King’s North!

The point is that King’s North at Myrtle Beach National is fun, beautiful, a splendid test of golf, and now is among the very best courses in The Grand Strand. Whereas the golf course made a solid impression on me more than a dozen years ago, it is now joyfully embedded in my memory as even better. I crave playing new courses and when I learned I’d be replaying one, I felt a bit underwhelmed. Boy, would I have missed out. The King’s North Course at Myrtle Beach National is terrific, an unexpected treat, and jumps to the top in my book. Don’t miss it!

Below is a series of photos detailing the beauty and challenge of The Gambler, the par-five 6th. Hit the island fairway to the left and you will likely have an iron-approach second shot into the par-five green. An approach shot view from the conventional or right side of the fairway. Looking back from behind the green toward the island portion of the 6th fairway.