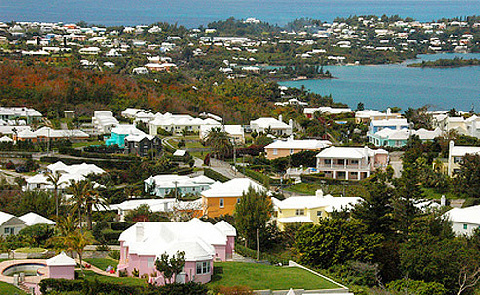 One of the most visual impressions I have of Bermuda is all the white roofs that occupy the remote, but classic British island in the Atlantic. Besides being artistically impressive, the scarcity of fresh water has made them a necessity. Did you also know that these white roofs have a beneficial environmental impact? Sometimes a unique environment coupled with scarcity results in beautiful solutions.

Drinking water has been a concern ever since human habitation began in Bermuda in the 1600s. Bermuda is set upon porous limestone and wells often yielded brackish or salt water. Early settlers soon came up with idea of paving hillsides to collect the running water as well as to shape their roofs to funnel the water from them into cisterns. The roofs are fashioned in step-like sloped surfaces with gutter ridges funneling water toward pipes leading to an underground tank. These are made of limestone blocks and sliced into individual slates after which several layers of cement wash and the roof is finished with whitewash. 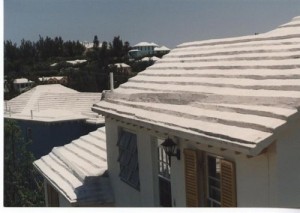 The white cement wash compound (paint & powder mixture) sanitizes the rainwater as it runs off into a holding tank (though roofs must be cleaned of bird droppings, etc.)

Once a roof is in operation and the basement tank has water, an electric pump lifts the water from the tank and it is stored under air pressure. Water comes out of open spigots anywhere in the house propelled by compressed air. Many houses have a separate system of plumbing running to the bathrooms. Wells on the premise, pumping salt or brackish water, feed this second plumbing system and the water is used mainly to flush toilets. It is estimated that flushing consumes 40 to 50 percent of the total water required in a typical residence every day, so these wells save a significant amount of rainwater.

Modern exploration has discovered fresh water accumulations under the Island and reverse osmosis processing plants have allowed some of the larger hotels to supply their guests with more abundant water, but most residents still depend upon their roofs for their water. In fact, regulations require that new dwellings, schools, and other buildings have at least 80% of the surface of their roofs guttered to collect the average 55” of average annual rainfall as well specify the size of their holding tanks. It works. 50% of all the potable water consumed in Bermuda comes from their roofs.

The white roofs also keep their homes cooler during the hotter months. One study of the Lawrence Berkeley National Laboratory of California indicates that a 1,000 square foot area of rooftop painted white has about the same one-time impact on global warming as cutting 10 tons of carbon dioxide emissions so Bermuda is doing its part.

Management of fresh water supplies in modern times remains a preoccupation of the government and people of Bermuda and their ingenuity has also resulted in a most attractive and distinctive architecture of a very engaging and distinctive island.

One Response to “Bermuda’s White Roof Buildings – Beautiful Yet Efficient!”