A few last observations about the 2011 Masters: 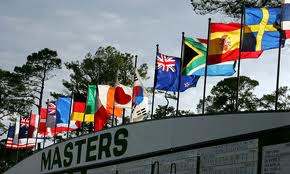 1.  The Brand.  The wild finale was galvanizing, and a most welcome reminder of what the Masters is about — the taut, high-wire intensity of  competition.  Everything else, from Magnolia Lane to Amen Corner, is setting and background.   Every year, though, the brand masters give us a heavier and heavier dose of feel-good, warm-fuzzy stuff, as though the only way to watch the tournament is with tears in our eyes and lumps in our throats.  I know I’m not the only one who feels the pieties sometimes go over the top (see the piece by my fellow curmudgeon Hal Philips).   As I watched the telecast, the sentimentality just kept coming — but there can be too much of a good thing.   Even Jim Nantz, who does the syrupy stuff as well and as often as anyone, started to sound insincere as the week wore on.  It’s like listening to a favorite CD over and over again; there comes a point where the music just gets stale.  As for the Par 3 contest . . . well, I don’t watch it.  This year I followed the Masters on TV and the internet, but even when I’ve been on the grounds, I was unable to get into the spirit.  It was just too cute and nicey-nice.  Ben Hogan never took part in the Par 3 Contest.  I rest my case.

2.  The Information. Lest you think I am not nostalgic, let me admit that I am — that I remember fondly a time when there wasn’t so much information spinning around.  Not so long ago, attending the tournament with a media badge, I felt better informed than the viewer at home since I could watch the posting of hole-by-hole scores for the entire field, attend the player interviews, and pick up printed copies of the Masters records.  Now all that information and more, much more, is available to anyone with a computer.  Streaming video makes it possible to see more action that any one observer could possibly have seen a decade ago.  Sometimes the result is a kind of over-saturation.  TMI!  But today, as the dust settles, I have to admit that I am thankful to be able to see shots I missed and to get a sense of the enormous, global response, with so many different and illuminating perspectives.

3.  The Old Guy.  I refer, of course, to Tiger Woods.   No matter how one feels about him, he has ruled the game for the last decade.  As I noted in a previous post, I have been conditioned to expect him to finish the job once he gets rolling, and I was stunned when he missed that short eagle putt on 0n 15 after a superb approach.   I know Woods often comes across as surly and self-absorbed, but I’m not about to add my two bits to the chorus of opinions about his psyche.   Honestly, I am turned off  by the number of writers who set themselves up as judges or analysts.  I think anyone who wants to write about Tiger Woods should start by reading Sophocles, Shakespeare, Freud, the Bible, and the many memoirs of rock musicians who were undone by fame, riches, drugs, and the attentions of desirable women.  This is a man who has endured reversals of an order of magnitude that are far, far beyond the reach of any grill room conversation.

4.  The New Guys. There’s a bunch of them, not just the ones who made a showing at this Masters.   As I mentioned in my Friday post, Notah Begay made an intriguing point about this generation’s approach to game.  They grew up digitally, and, as Begay reminded TV viewers, that’s how they learned the game — by watching TV, looking at the Internet, playing video games.  Of course, they were also hitting millions of shots, but they didn’t just have hazy ideas about their heroes and the imaginary tournaments they wanted to win.  Thanks to technology and connectivity, they had precise ideas and images of how they wanted to play and where they wanted to win.  Factor in the equipment they use, and this generation has to be considered a kind of vanguard, playing Golf 2.0.   It’s the only game they know.  They’ve always played with the high-tech clubs and balls, and they’ve been belting out 300 yard drives since they were teenagers.  The courses that seem so staggeringly long to us old-timers are the only courses they’ve played in competition.   When they arrive for the first time at Augusta, the course looks familiar.  They might seem “fearless” to us, but they have the game, the mindset, and the tools to take on monster challenges without blinking.  Correction:  They are susceptible to blinking on Sunday when the pressure builds.   There’s no high-tech way to prepare for experience of the back nine on Sunday.

5.  The Golf Course. Augusta National is about 500 yards longer than it was two decades ago, and the fairways on many holes have been pinched in.  The process was called “Tiger-proofing” when it began, and I’m not going to detail the changes or the many criticisms that were made as the course went through what was sometimes a painful transition (Geoff Shackelford has written often about the changes with insight).  Suffice it to say that Augusta National is now a different course, but they seem to have the kinks just about worked out.  The course set up this year, with greens that seemed a bit more receptive and pin positions that invited players to take risks, produced low scoring and a birdie bonanza.  Instead of the grim, grudging course that we’ve seen in previous years, Augusta National was back in form as golf’s most beguiling Temptress.   She hosted a beauty of an event.