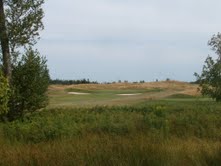 When golf’s leaders meet to consider the future of the game, they often conjure up a mythical club, a place where golf will prosper and thrive, attracting new players and keeping older golfers happily in the fold.  It will have to be an affordable club, not an expensive one. This mythical club won’t be an enclave reserved for a small handful of people, but a welcoming place whose doors are open to all. The golf course won’t be a monster, but a playable layout that will give pleasure and challenge to players of all ages and abilities.  As a bonus, the club’s activities will be woven into the fabric of the community, and the traditions of the game will be built into the club’s DNA.

At first glance, however, Island Country doesn’t seem to belong to the future but to the halcyon past that lingers in Deer Isle, a piece of rural Maine where time seems to have stood still for decades.  When you turn into the ICC drive, passing the roadside sign that proclaims “Public Welcome,” you catch  glimpses of a golf course that appears to have settled comfortably into a landscape dotted with stands of birch, spruce, and pine. The small clubhouse is painted a cheerful red, with white trim and white rockers on the porch.  The whole clubhouse area is shaded and compact, with the putting green and three tennis courts flanking the clubhouse, with pull carts and a few riding carts neatly arrayed by the shop door.   To anyone accustomed to gargantuan clubhouses, and to the attendants who accost you at such places, the scene at ICC – unfussy, unfancy, a model of Yankee simplicity — will be blessedly unfamiliar.

The first tee is steps away from the clubhouse, and it is equipped with an old-fashioned wire spiral – when you ball twists to the bottom, it’s your turn to play away.  You tee your ball between the markers (miniature, brightly striped lighthouses) and face the first enticing shot of the round, a drive to a broad fairway that sweeps to the right.  There’s plenty of room for the safe shot, but if you can carry the bunker in the corner of the dogleg, you can get close to the green.  And if you block the drive, you’re in a copse of trees . . .

That opening tee shot is a foretaste of what is to come.   The golf course isn’t long; it isn’t a championship course, isn’t even 18 holes.   It’s a 9-holer, par 34, 2400 yards in length, but don’t let the length fool you.   This is real golf.  The course requires a variety of shots and clear thinking.   Risk and reward must be weighed on almost every shot, and the small, lively greens demand precision with the wedge and the putter.   Factor in the well-tended turf and the breezes that blow in from Penobscot Bay, and the golf at ICC tests the full range of a golfer’s skills.

Visitors play $40 for 18 holes, using different tees for each nine.  For members the rates seem impossibly low:  full season membership for a family is $1175, for an individual $665.  The most astounding rate of all is for junior members:  $150 for the season.

No wonder the place stays busy.  The golf calendar for the season, running from mid-June to late September, lists 12 tournaments, four of them women’s events.   In addition, there are regular weekly events for men, women, and couples.  The Deer Isle high school team uses the ICC course and its members play for free; groups of youngsters roam the place with bags slung over their shoulders.  They have the preoccupied look of kids who are planning to play 36 or 54 holes in a day, and loving every minute of it.

ICC co-president Dick Roth told me that the half of the club’s 140 members live year-round on Deer isle, and half are “from away.”   The cross-section of golfers includes artists, chefs, writers, educators, lawyers, fishermen, carpenters, and a few of the 1%.  “We nurture an egalitarian spirit,” Roth said.  “It’s one of the traditions of the club to include all elements of the community.”  ICC is a “semi-private” club, a term that often carries a faint whiff of opprobrium, but for Roth and every other ICC member I spoke to, the hybrid, welcoming, democratic nature of the club was a source of pride.

Island Country Club dates back to the 1920’s, but the golf wasn’t always as good as it is now.   The club was formed by a group of summer residents who had high hopes for their course.  They commissioned Wayne Stiles, the pre-eminent New England golf architect of the day, to design a 9-hole course, but they didn’t have the land needed to implement the full design.   The club opened in 1928 with only five holes; a year later,  ICC had a 9-hole course, but it was much smaller than the one Stiles had envisioned, consisting of five short par 3’s and four short par 4’s.

That’s how matters stood until 2009 when Ross Forbes was engaged to renovate the course.   The ICC long-term planning committee — led by Bill Whitman, a member whose family could trace its Deer Isle roots back to the early 19th century—had been patiently exploring design ideas and acquiring adjacent parcels of land that would allow for a significant expansion of the course.

Ross Forbes is a New Hampshire-based architect who has built notable courses on several continents, but he has long been a student of the work of Wayne Stiles. The prospect of revamping a Stiles course was a rare professional opportunity, one that also spoke to Forbes’s nostalgia — his first taste of golf was caddying at a nine-holer at a venerable New England resort.

Forbes won over the committee with a plan for a more substantial course, one that would be sensitive to the character of the property, require the use of just about every club in the bag, and remain faithful to the spirit of Wayne Stiles. “There may, or may not, have been some Wayne Stiles fingerprints, but it was impossible to be sure,” Forbes said.  “There were a few green sites that looked as though they might be his — they were placed in a way that showed a real sense of design, something that a local group wouldn’t necessarily have had.   Where I found features like that, I tried to keep them.  But for the most part, I was building holes and trying to make them look like something Stiles would have built.”

Forbes used the features of the rugged property – the hilly terrain, the stands of trees, the marshy areas – give each hole individuality and character.   The 6th hole is probably the prettiest on the course, a 140 yard par 3 with the green sitting sweetly in bowl fringed with fescue; the 7th is a scary downhill par 4 of 268 yards that cries out to be driven, though the fairway twists and tumbles and OB stakes crowd the left side of the green; the 8th is a par 5 of 488 yards that curls around a marsh.

And so it goes, with each hole making its own claims.   Only once was Forbes hemmed in; the 3d and 4th holes are back-to-back short par 3’s that had to be placed side by side.  Even here Forbes was able to craft different shotmaking requirements; the 3d plays slightly downhill to a green open to a running shot, and the 4th, the shortest hole on the course at 113 yards, is uphill and somewhat elevated. The challenge is to place the tee shot on the right section of tripartite green, which has a swale in the middle and raised plateaus on either side.  Forbes describes it as a “sideways Biarritz green,” and says that “when the hole is cut in the swale, there will be lots of birdies and some holes in one.  But when it’s cut on either wing, especially on the left, it’s not an easy shot.  You might have a wedge in your hand, but you have to hit a tiny area, and if you miss on the short side, you’ll have to earn your 3.”

During my stay on Deer Isle, I played only two rounds at ICC — one with a full bag of clubs, one in the annual Howdy Thompson Tournament, carrying only a wood, a 6-iron, and a putter.   Those were the clubs preferred by Howdy himself, a lobsterman who liked to go out of an evening in his rubber boots and bib overalls.  He seems to have been the Seve Ballesteros of the place, able to improvise any shot necessary with those three clubs.  When the tournament was over, I had the temerity to suggest that they might consider adding a fourth club, a wedge.  The idea was batted down instantly and decisively.  Tradition is not to be trifled with as ICC.

I also attended the annual auction (disclosure:  books of mine were offered in the silent bidding). It took place on a crisp Maine evening, and the co-president told me that it netted almost $30,000 – just about enough to balance the budget for the year.  The ICC’s short season will end in the fall, but the course remains open year-round.  During the winter, when there’s no snow on the ground, a few hard-core golfers show up to play, and they drop their green fee in an honor box.

An honor box!  It was just one more detail that made me want to return to Deer Isle.  In fact, I am already booked for next year,  trying to decide what tournaments I want to play.  I definitely want another crack at driving that 7th green, and  I am pretty sure that I can scrape together the money for a membership at ICC.

Island Country Club might be a throwback, but I hope that clubs exactly like it will figure in golf’s future.   For sure, it has a place my own golfing future.