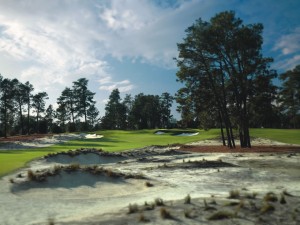 The restoration at Pinehurst No. 2

Pinehurst No. 2, recently re-opened after a restoration by architects Bill Coore and Ben Crenshaw, has gotten rave reviews.  The Coore-Crenshaw team took the course back to its original parameters, getting rid of acres of turf and restoring the sandy roughs — with their mounds, bunkers, and clumps of wire grass — so that they will look and play more like the No. 2 of old, the course that was the pride and joy of Donald Ross.

Getting rid of acres of turf . . . I repeat that line, in italics, because the environmental aspects of the restoration have been overlooked.   Dramatic as the changes are to the appearance and playability of No. 2, the changes at turf level are every bit as eye-opening.   Turf level and beneath, I should say, for the “new” irrigation system is revolutionary in its own way.

How much turf was removed?  Bill Coore knows the answer to a decimal point:  36.2 acres.  During the last few decades, the grass had covered more and more of No. 2, until it extended pretty much from tree line to tree line.   Looking at old photos, Coore and Crenshaw were able to establish the edges of the original fairways.   They started lifting turf, loading it up on trucks, making it available to anyone in the Pinehurst community who could use it.  Those 36.2 acres were recycled to school playgrounds, a few churches, and quite a few local backyards.

With less turf, they could also cut back on irrigation.  In fact, they were able to eliminate over 500 sprinkler heads.  They identified and flagged the old irrigation lines.  Bascially, the old system was a center row system — one row of sprinklers down the middle of each fairway (with double rows only on stretches of the first two holes).  There are plenty of modern courses where the number of sprinkler heads is well 1,000, and there’s at least one course — Liberty National, in New Jersey — that has boasted of having 5,000 + sprinkler heads.

At Pinehurst No. 2, there are 410 heads.  That’s not a mistake.  410.   (In the new roughs, to help get the wire grass established, there are some quick-couplers, but I’m not including them in the head count.)

In his calm, firm way, Coore says that he and Crenshaw are not environmental “crusaders,” but the judicious use of natural resources is a byproduct of their design approach.   In one of their first projects together, Talking Stick in Arizona, they got a lasting lesson in how much turf is required to build a course.  For purposes of water conservation, Arizona regulations set a limit of 90 acres for a golf course, and Coore recalls that they were fretful about staying under the limit.  “It was fascinating,” he says, “to realize that when we laid out both courses, using all the turf we wanted, it added up to 76 acres on one course, and 73 acres on the other.  I thought it was going to be way, way more, but we weren’t even remotely close.”

Coore regards that experience as a kind of “revelation,” proof that a course doesn’t need — as was commonly assumed — anything like 100 acres of manicured turf.  Most of it, Coore-Crenshaw, had found was extraneous, and they’ve made it their practice to use as little manicured turf as possible, while making the course provide interest and challenge. We-Ko-Pa, another course on Arizona tribal lands, has only 63 acres of turf.  Old Sandwich, in Massachusetts, has 57 acres.

“People hear that,” says Coore, “and they think the fairways must be tiny, but they’re not.  Our fairways usually are considerably wider than at other courses, and yet we use less turf, and therefore fewer irrigation heads and less water.”

At Bandon Trails, the native flora surrounds the fairway and greens

Without ever setting water conservation as specific goal, Coore-Crenshaw nevertheless accomplished it because they approached golf design in a different way.   Coore again:  “We’ve always gravitated toward projects that called for a more natural treatment of the property, not just in the appearance of the course but in the way it actually played.   The more we looked, the more we realized that edges of the fairways don’t need to be as perfect as the center.  Over time we went away from the type of irrigation that had wall-to-wall perfect coverage and used a thousand or more sprinkler heads.  We say our courses ‘fade from the edges’ — they’re green in the center of the fairway, but they might get little brown in some areas, and those last few feet might get scruffy.”

Pinehurst No.2 is a prime example of that approach, as are most other Coore-Crenshaw courses; the playing areas blend into “native” areas.  These very from the prairie grasses at Sandhills, to the beach grass and knick-a-nick at Bandon Trails, to the sandy roughs with mounds, bunkers, pine needles, and wiregrass at No. 2.  Coore and Crenshaw let the locale dictate the way that the surroundings will influence the appearance and playing qualities of the course, and they are not dogmatic about using only a single, center row for irrigation.  Some of their fairways have double and a few even have triple row irrigation, Coore admits.   It’s always a judgment call.

Still, Coore knows that this approach has a positive environmental effect — and that it can make for more interesting, and varied golf terrain.  “We’re not doing anything new,” he insists.   “This is the way courses were designed and built years ago. ”  But he does add slyly, “We’re taking irrigation back to the 1960’s and beyond.”

The bottom line at Pinehurst No. 2:  Stunning design really CAN go hand in hand with sound environmental practice.