On the eve of the Open Championship, we could do worse than consider the question posed in the case “Rex V. Haddock” brought before a magistrate in Cornwall many years ago.  It seems that one Alfred Haddock been charged under the Profane Oaths Act, 1745, with swearing and cursing on a Cornish golf course.  Haddock  appeared before the magistrate to protest the exorbitant amount of the the fine, more than 100 pounds sterling, that had been imposed.

Why was the fine so onerous?  The Act of 1745 assessed a fine of only one shilling upon a soldier or seaman who cursed; two shillings upon any other person under the degree of gentleman; but five shillings upon a person of or above the degree of gentlemen.  Moreover, the penalty was not to be assessed for a single outburst, but each individual oath was to be fined separately.  Haddock had been heard by his caddie and bystanders to have uttered more that 400 imprecations while playing the 12th hole at the Mullion golf course, a hole known as the Chasm and requiring a shot over an arm of the sea.  At five shillings per oath, the offense would prove costly indeed. . .

Enough!  These two paragraphs, I hope, give you the wonderfully daft flavor of the case.  A friend sent it to me as a PDF attachment to an email, and the pages, obviously photocopied from an old book, looked authentic.  I didn’t doubt that British Law might include the Profane Oaths Act of 1745, a law that levied fines of varying amounts on commoners and gentlemen.  I read the ruling, laughing at the cockamamie logic; Haddock based his case on the argument that a “gentleman” cannot be held accountable for what he says while playing the infernal game of golf.  At some point, I began to suspect that it was all a satire, but I’d originally taken the bait along with the hook, line, and sinker. 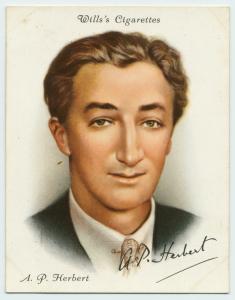 I’m not the only one to have been so thoroughly deceived by A. P. Herbert. Never heard of him?  Neither had I, but after a little poking around on the the Internet, I realized that I had come across  one of those classic Brits, droll and debonair, never at a loss for a witty remark, whose descendants are James Bond and Peter Alliss.   They are sophisticated and unflappable, these chaps, but in Herbert’s case, there was one thing that had the power  to loosen the stiffest of stiff upper lips — golf.

Herbert was a man of many parts and accomplishment.  Educated at Oxford and trained as a lawyer, he became a prolific writer of novels, plays, light verse, and sketches for Punch, the humor magazine.  His best-known work was “Misleading Cases in the Common Law,” satires that often featured the same Alfred Haddock who argued so persuasively against his fine for cursing.   Herbert fought in two wars, surviving the battle of Gallipoli, and he was a Member of Parliament, a position that did not prevent him from bringing a charge against the House of Commons for selling alcohol without a license.

Herbert was also a golfer, one of several literary luminaries (others included A. A. Milne, Sir James Barrie, and Sir Arthur Conan Doyle) who played their golf at Mullion.   How good a golfer he was I cannot determine, but he certainly understood the frustrations of the game, and the furies that it can inspire.  Here is how the magistrate reasoned toward a decision about Haddock’s swearing and his status as gentlemen:

Evidence has been called to show the subversive effects of this exercise upon the ethical and moral systems of the mildest of mankind.  Elderly gentlemen, gentle in all respects, kind to animals, beloved by children, and fond of music, are found in lonely corners of the downs, hacking at sand-pits or tussocks of grass, and muttering in a blind, ungovernable fury elaborate maledictions which could not be extracted from them by robbery or murder.  Men who would face torture without a word become blasphemous at the short fourteenth.  And it is clear that the game of golf may well be included in that category of intolerable provocations which may legally excuse or mitigate behavior which is not otherwise excusable, and that under provocation the reasonable or gentle man may reasonably act like a lunatic or lout respectively, and should legally be judged as such.

The magistrate reaches the conclusion that golf deserves a special section under the Profane Oaths Act, and that Haddock is not be judged adversely for his behavior; he is sent from the court without a fine and “without a stain on his character.”

To read “Rex v. Haddock” is a bit like hefting an old cleek with a hickory shaft and hand-forged blade; it’s a golf club, but the feel of it transports you to a different era.  Herbert was a contemporary of Bernard Darwin and a friend of P. G. Wodehouse, and his prose has many of the same virtues as theirs — clarity, economy, a seemingly offhand ease and elegance.  They took golf very seriously, even passionately, but never forgot that the game is sublimely, maddeningly absurd.   To play the game and appreciate it, to relish its paradoxes and its power to reduce a “gentleman” to a cursing brute, one needed not just skills but a robust sense of humor.

British golf has a tradition of writers who celebrated the game as a worthy branch of the great human comedy.   When they poked fun,  their digs were a way of exacting a small tribute, a tiny measure of self-respect, from a game that otherwise had the power to humiliate its adherents.

I hope you’ll enjoy the full story of Alfred Haddock’s day in court.  And I am sorry to report that the 12th at Mullion no longer exists.   Erosion took away the tee site, and the Chasm is no more.

Cornwall, the westernmost county in England, isn’t a golf destination for many, but it has its share of fine courses, both links courses and parkland courses.  For golfers who like to venture off the beaten path, a trip to Cornwall has much to recommend it — and a place to start planning a trip is by reading this excellent article by Charles Seibert.