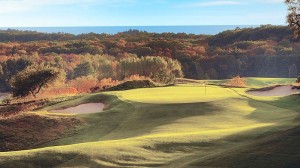 When George Peper was the editor of Golf Magazine, he gave a harsh review to a new course by a well-known professional whom I probably shouldn’t name (Greg Norman). Norman let him know he wasn’t happy about the review, and in the ensuing dust-up Peper tried to get to the essence of what he valued in a golf course. He came up with this formula: Character and Charm.
Both qualities are elusive, of course, and I can imagine some golfers — like the illustrious duo Bomb and Gouge — rolling their eyes and curling their lips with contempt. Charm? CHARM???? What has CHARM got to do with a 340 yard drive???? To which I would reply, what has a 340 yard drive got to do with most golfers? A part of Peper’s argument — and Mike’s, too — was that courses had gotten so big and so difficult that they were unplayable for most golfers. Who wants to spend four hours (or five) getting beat up by a golf course? 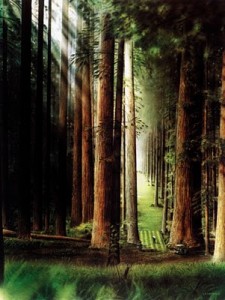 Older courses were built on a different scale. Even though clubs like Baltusrol and Winged Foot competed to host prestigious events, and wanted tough courses, the designers of the Golden Age didn’t design their courses with professionals in mind. I can’t claim to have read the work of all the golf architects who worked during the Golden Age, but those I have read — Macdonald, Tillinghast, Mackenzie, Hunter, Thomas, Ross –seem to have a firm idea of the what makes an ordinary golfer so passionate about the game. One of my favorite quotes is from George Thomas, the architect of Riviera, Bel-Air, and many other California courses: “To learn golf architecture one muist know golf itself, its companionshipes, its joys, its sorrows, its battles — one must play golf and love it.”

The mindset of the man who wrote those words is worlds away from the mindset of, for instance, Robert Trent Jones, who famously summed up his philosophy as “hard par, easy bogey.” Thomas was identifying with the average golfer, considering the intangible and emotional appeal of the game; Jones seemed to regard the individual golfer as a hopeless hacker whose main interest was in the number on the scorecard. Thomas wanted to create a playing environment that invited a golfer to respond with his inmost golfing self — a self made up of imagination, judgment, emotion, fantasy, and of course frustration.

Jones wanted to create a playing field that was exacting in its demands, requiring a player to execute certain shots — or else.

Jones, of course, designed for the pros. He was known as the Open Doctor, and his son Rees — who has inherited that title — has reminisced about his early experience measuring the drives of the professionals. This was information his father used to place the fairway bunkers, pinching in the landing areas where a good drive would finish. Jones also liked elevated greens, requiring high, fast-stopping approach shots. These and other features of his design seem to intended to “defend par” –a vaild concept, I guess, for a club hosting the U. S. Open.
But it seems as though this idea of “defending par” influenced not only the courses that Jones designed, or re-designed, for major tournaments but seeped into nearly all his work. I think it defines the work of many of his contemporaries and successors, which is to say most of the golf architects of the modern era. Just think about it: Defend Par. That’s the mindset, excuse me, of the prim spinster who has decided that her mission is to defend her . . . you know.

In any case, it’s a long way from the mindset of a designer like George Thomas . . or Bill Coore or Tom Doak or David Kidd. These are the designers whom Mike Keiser hired to build the “throwback” courses at Bandon Dune. From the jump, he made it clear that he wanted the courses to appeal to the “retail golfer,” his term for the average golfer who would pay to play. He had no interest in a building a course that would attract a professional event. When interviewed, he had no hesitation in declaring his opinion that too many courses were built for the top 1% of golfers, and they weren’t much fun for the other 99%. Mike wanted courses that offered a player like him (his handicap hovers around 10) fun and excitement.

Fun and excitement. Mystery and adventure. Charm and character. I’ll take a helping of all of those, thank you, and let Bomb and Gouge lead the charge on those courses that Defend Par.