That’s how a veteran Nashville, Tennessee, cabbie answered my question about whether spring or fall would be a better time for a golfer to visit his fair (fare?) city. “Either season would be a great time to enjoy the outdoors and sights of the area,” he said. “There’s so much to do.”

After visiting Nashville earlier this year, I couldn’t agree more. (Cabbies trump TripAdvisor in my opinion.) In fact, I’m still kicking myself for neglecting the Music City, by-passing it so many times on my way to Georgia and Florida. Gee whiz, even a hot new television series—Nashville, seen on Sunday nights—beat me there.

I’ll get to the golf in a minute but let me share a few highlights of my stay which included a few traditional stops as well as some new ones.

Vanderbilt University—This renowned institution is located less than two miles from the downtown business district and is definitely worth a tour. The 330-acre main campus is full of bustling charm and beauty and its Peabody section has been a registered National Historic Landmark since 1966. After buying a Vandy golf tee-shirt at the bookstore, I even caught parts of varsity baseball and lacrosse games. 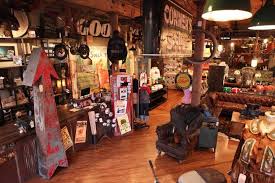 Antique Archaeology—Again, only minutes from downtown, this is one of only two shops in the U.S. owned by Mike Wolfe of the popular American Pickers series on the History Channel. My spouse is a big fan of Pickers and Wolfe, once aptly described by the New York Times as the “Jack Kerouac of junk.” Well, one person’s junk is another’s must-have collectible. Located in an early 1900s auto factory, the store boasts antiques, folk art and branded merchandise and—being Nashville—live music.

Cheekwood—Farther afield and west of the city is this wonderful botanical garden, sculpture trail, art museum and the Cheekwood Mansion itself, the former estate of Leslie Cheek. Cheek was an early and savvy investor in Maxwell House coffee and later IBM. His immense fortune accounts for this magnificent 100-acre estate centered by a huge Georgian-style mansion surrounded by gardens. Incidentally, en route to Cheekwood, there’s the added bonus of passing through the famed Belle Meade neighborhood, one of the most stately and prestigious residential areas in the region, which includes the private Belle Meade Country Club, an admired 1921 Donald Ross design. Twenty-five years ago, noted golf architect and writer Tom Doak described the club as “one of the premier social clubs of my experience, with ballrooms and formal dining rooms to beat the band.”

Parthenon—This astounding full-scale replica of the Parthenon in Greece is how Nashville earned its moniker, “Athens of the South.” Built in 1897 for the Tennessee Centennial and Expo, the Parthenon is now part of Centennial Park within the city and is home to Athena, the tallest indoor structure in the Western world. Okay, it’s no Michelangelo’s David in Florence, but it’s an amazing work with a compelling local history.

Station Inn—This iconic bluegrass music venue was the highlight of the weekend. The humble nondescript locale (aka, a dive) serves simple food, snacks, and adult beverages while delivering a rollicking good time by a rotating roster of guest musicians. For my visit, high octane live music and entertainment were provided by Shawn Camp and band; his “Too Drunk to Karaoke” is a classic. Tip: get there early because there’s no reserved seating.

Broadway—In spite of its tourist trap-like demeanor, this busy section of honky-tonk saloons and free live music must be experienced and checked off the list. Along the way, stop in at the Hatch Show Print, one of the nation’s oldest letterpress poster shops. Since 1879, it has created posters and art for countless stars, concerts and sporting events. You’ll be hard-pressed not to buy another tee-shirt.

Other considerations—Tried and true attractions include the Ryman Auditorium (Nashville’s Carnegie Hall but sadly dark on our weekend), Grand Ole Opry, The Hermitage (Home of President Andrew Jackson), Music City Trolley Hop, Country Music Hall of Fame, and scores of others. 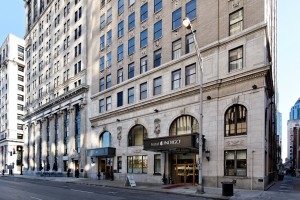 Hotel Indigo—As faithful readers may recall, I favor this smaller, boutique-style hotel brand and I’ve yet to be disappointed for its ambience, amenities and overall service. Located in the heart of downtown in a former bank building, Hotel Indigo Nashville just completed a major and most impressive renovation. So how good is the renovation? Well, so good that the aforementioned Nashville television program shot some recent scenes there. Talk about a set design affirmation!

The spacious lobby and bar has a nifty printer theme and decor in keeping with the city’s early roots in the printing and publishing industry that spawned a host of live music saloons and restaurants in the famed Printers Alley, only a short stroll away. An added bonus of the hotel’s bar and lounge area is the delightful live music offerings, available every night but Sunday. On one lucky evening, it was “songwriter’s night” where local musicians performed original works. Terrific stuff—with or without a worthy brew. 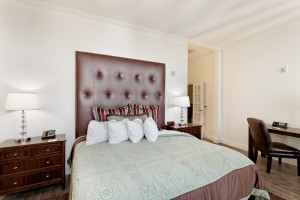 With a robust view of the cityscape, our compact but well-appointed room was newly redecorated with elegant panache featuring a large comfy bed, deluxe bedding, 32-inch HD TV, work desk and free Wi-Fi access. The bathroom seemed like a mini-spa with its marble counters, terrazzo floors and spacious shower.  Most importantly, the service component surrounding our stay was excellent due to the attentive staff. In particular, the valet staff members who helped with our car and luggage were standouts. And kudos to affable Mike in the lounge who served me coffee and breakfast one morning along with a wealth of helpful tips and suggestions.  And unlike the stars of Nashville, he wasn’t just acting the part. Mike really enjoyed his role in imparting genuine service and attention.

Golf Courses—Yes, the Nashville area has a strong and talented line-up. For starters, I’d recommend Harpeth Hills, a “people’s choice” municipal course selection set in the rolling hills of Percy Warner Park. Par-72, it offers five sets of tees ranging from 4904 yards to 6999 yards. Indicative of its mettle, it has hosted a USGA qualifier. 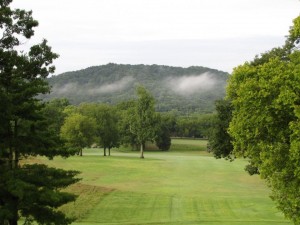 For aspiring beginners and juniors—and the next Brandt Snedeker (a proud Nashville resident)—Percy Warner GC (west Nashville) and Shelby Links (east) are highly recommended. Both were recently rated as two of the top five courses for junior and beginning golfers by Nashville’s The City Paper. The oldest (1924) muni in the city, Shelby Links is where Snedeker honed his game as a junior.

Topping that list, however, is Golf House Tennessee’s superb par-3 course in nearby Franklin. Designed by Bob Cupp and opened in 1995, the Little Course at Conner Lane is a gem and a great place for kids, parents and grandparents to play the game. It’s also an affiliate location for Nashville’s First Tee Program at Vinny Links, another highly regarded par-3 course ideally suited to help grow the game.

In the big game hunters category, choices include the Hermitage GC, ten miles from the city, sporting two 4-star courses, General’s Retreat and President’s Reserve (tougher, according to loyalists), and offering scenic holes on the river. And located near Opryland Resort, you’ll find the inviting Gaylord Springs Golf Links, an upscale layout along the banks of the Cumberland River designed by former US Open winner Larry Nelson. Like the President’s Reserve, it’s rated as one of the top five daily fee courses in the state by Golfweek. 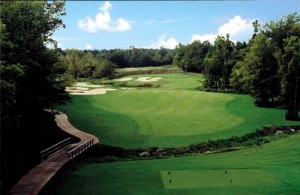 Finally, if you know any private course members in Nashville see if you can wrangle an invitation to Richland CC, a Jack Nicklaus signature course, rated #9 in Golf Digest’s Best Courses in the State listings. Or better yet, try (mightily) to make a connection to Belle Meade, rated # 4. Alas, dropping Tom Doak’s or my name will not make a difference.

If all else fails, hail a cabbie somewhere in the leafy Belle Meade neighborhood, jump in and say, “follow that cart!”