Competitive players have always identified with Jones’s truism. One’s typical weekend round with its casual atmosphere and generous gimme putts is a much different experience than hole-everything-out medal play. On that note, I would add a caveat to Jones’s adage: “There’s putting and then there’s tournament putting.” Faced with unreliable nerves during competition, golfers have resorted to a variety of measures to get the ball into the hole. Some have gone to the belly putter while others have gone to the long, broomstick putter. Well, beginning in January 2016, those two options—if anchored to the body—will not be permissible within the Rules of Golf. A belly putter, Las Vegas Tour winner Webb Simpson indicated he’ll be experimenting with a different method beginning with the 2014 season. 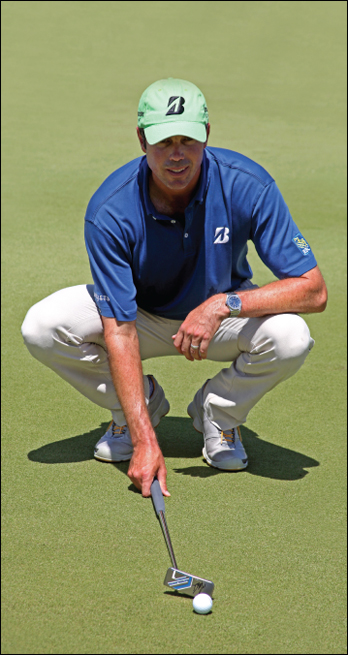 Kuchar lines up with the Model 2

That’s why I’ve been particularly intrigued with the conforming arm-lock putting method popularized by Matt Kuchar. I mean, here’s a Tour player who was a darn good conventional putter (Top Ten in Tour putting in ’08 & ’09) and then several years ago switched to the locked arm method. As Kuchar said, “I was a good putter but I wanted to be more consistent and that’s why I switched.”

Last month, I went to see PGA Teaching pro Mike Boogaard of The Pines in Grand Rapids. Boogaard specializes in putting instruction and has worked successfully with noted Michigan amateurs Tom Werkmeister and Randy Lewis. Boogaard demonstrated the effectiveness of the lock-arm method. “It’s a system that forces you to rock the shoulders in the putting stroke,” said Boogaard. “Anytime you can take the hands out of the stroke, you’ll minimize the nerves.” As someone who plays competitive senior events, I was all ears on that last note. I’m a decent putter and hole my share of putts, but in competition I’m too inconsistent and uncertain. So with Mike’s advice on a properly fitted putter for me, I committed to giving the arm-lock method an off-season trial run.

For the putter itself, I opted for an obvious choice: the one Matt Kuchar is using and now endorsing. Manufactured by the Illinois-based Bettinardi Company, the Kuchar Model 2 (suggested retail is $375) is a pear-shaped mallet. Boogaard recommended a 39” length and it provided a comfortable fit. It’s important to be fitted and measured for the proper length or otherwise the shaft will be too long or too short for one’s forearm. It also has 7 degree of loft. Why? Because the Model 2 features a double bend shaft with a 2.5 shaft offset. With that much built-in offset, added loft is needed to impart a better roll off the face. Otherwise, with conventional loft the ball would skid off the face.

I’ve used the Kuchar Model 2 for several rounds so far and it’s exceeded all my expectations. First and foremost, its design and appearance are clean and elegant, sporting a soft carbon steel with pewter finish. Second, its feel is solid and well-balanced. I also like how the ball rolls off the face. After using a mallet with a rubber-face insert for years, I was worried this putter would deliver more “hit” to the ball.

According to Sam Bettinardi, V-P of Sales and Marketing, the Model 2 has a patented F.I.T (feel-impact-technology) Technology that is the key to its softer feel. “In the milling process, we make a second horizontal pass over the face of the putter which removes three grams of weight,” said Bettinardi. “By reducing 55% of the face material, a softer feel is guaranteed.” He also mentioned that when the company first started making putters in 1999 it used a vertical milling process on the face which delivered not only a handsome honeycomb design but also a flatter face than with the typical horizontal face milling. 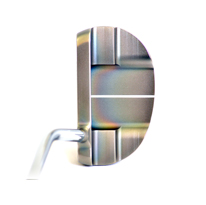 Another classy touch with the Model 2 is the attractive head cover. Made with a quality and durable fabric, it’s embossed with Kuchar’s signature and also the American flag. Bettinardi is proud that its 65-70 employees, based in Tinley Park, Illinois, deliver a finely made product, meeting stringent ISO 9001-2008 standards, and don’t resort to outsourcing. “We have the talent and expertise right here in Tinley to make all the putters we’ll ever need,” said Bettinardi. “Best yet, our offices are only a few steps away from the factory floor.”

Coincidentally, my wife has been putting with a Bettinardi putter since 1999 when a company rep exhibited at the West Michigan Golf Show and she smartly purchased one. Oh no, I can hear her now giving me the needle as she sees me with the Kuchar Model 2:

“You see, there’s putters and then there’s Bettinardi.”