(Naples, Fla.) Before playing the impressive Naples National Golf Club recently, I accidentally came up with a new criteria for evaluating a golf course. Shortly before I left my “virtual” office for my eagerly awaited tee time, I opened one too many emails. In the dreaded in-box was a matter containing some unsettling business-related news, the type that would normally prey upon the mind for the rest of the day. So now the question was: would the information spoil my enjoyment of this well-regarded Hurdzan-Fry design?

After spending a splendid four hours at the course, I can attest the bad news didn’t mar the day. In fact, as testimony to the course’s mettle and the club’s allure, it never popped up once in my silly head during the round. So, that’s the short answer about my new rating criteria. For a longer explanation of what makes Naples National an extra special golf experience, let me count the ways:

1. Golf at its core—When it made its debut in 1993, Naples National became the first new club in the area that was exclusively a golf domain and not part of a multi-purpose development. Golf reigns supreme here so you won’t find intrusive homesites, tennis courts and swimming pools. It’s pure, unadulterated golf for which its private members pay a pretty penny for the privilege.

2. Hurdzan-Fry—The dynamic design duo of Dr. Michael Hurdzan and Dana Fry really began their stunning rise in golf course design with Naples National. Heretofore, Hurdzan was largely known within regional circles, respected and in-demand for his technical expertise in design, land usage, environmental practices and agronomy. Fry, who started in the business as a shaper with Tom Fazio, was an accomplished amateur competitor who brought a player’s eye and insight into the design process. Their marriage of talents over 20 years ago delivered a progeny of smart, environmentally sensitive and intriguing holes at NNGC. More on that later. (Note: in my native Michigan, Hurdzan designed The Meadows at Grand Valley State University, host of seven NCAA national championships since 1994.) 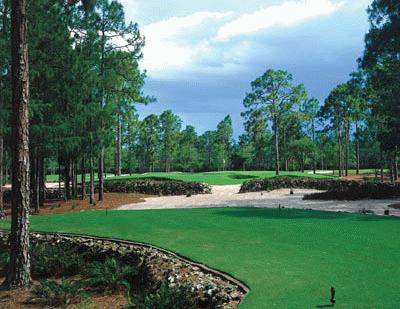 A devilish delight: the par-three 6rth

3. The lay of the land—Although situated on 320 acres, the course efficiently commands only 40 acres of grass.  And due to the club’s original land permitting, 150 acres are set aside as a wetland preserve. As a tribute to its design strengths, although the land is as flat as downtown 5th Avenue (and equally walkable!) it still possesses an inviting and varied appearance due to preservation of native grasses, pines, and rustic cypress trees.

4. Caddie program—Pedro, my caddie, personified what’s best about this inestimable service, integral to the club experience. A PGA teaching pro by training, Pedro was my sole companion when I played the course on a late Tuesday morning. Yet he imparted all the local knowledge, company, good humor and anecdotes needed to relish the course and its frequent challenges.  He pointed out the gist of each hole, providing sound advice on the best approach to the flagstick. And in spite of my balky putter, he saved me several strokes on the greens due to his savvy reads.

5. Where Eagles Dare—Seeing exotic birds and wildlife is nothing new when playing in this part of the country. Still, the sightings here of juvenile bald eagles that nest on the property made for a special treat. According to staff, the eagles have been known to snatch a golf ball  or two in its talons and fly off.  Later in the day, Pedro pointed out another favorite raptor commonly seen on the course, a swallowed-tail kite.

6. Rock of Ages—At first, I was somewhat taken aback by the rock formations seen around some of the par-threes, tee areas and ponds. Candidly, they appeared overwrought and out of character. But later, I learned the coral rock was excavated during construction and Hurdzan-Fry decided to retain and use it as another indigenous feature of the course. On second thought, it works well and fits. A stone wall winds it way around the course, lending a touch of New England charm and antiquity. And as Pedro pointed out, it can play havoc with errant shots.

7. Conditioning—As expected, the conditioning and maintenance of fairways, bunkers, tees and waste areas were impeccable. And given the fact the greens were completely redone only this past summer, they were very impressive. In another year’s time, they’ll only improve and accept approach shots more consistently. Kudos to Golf Course Superintendent Jim Colo and his staff for their painstaking efforts in this major undertaking.

8. Improvements—The new, or should I say the “old,” greens result in another pleasing feature of the layout. Some of old greens are used admirably to create a number of new sod-faced bunkers around the course. Along with the aesthetics of late afternoon shadows, the renovated bunkers provide further definition and character to the green complexes. Several greens were re-contoured and slightly reshaped resulting in less penal run-offs and more pin positions.

9. Favorite golf holes—On the front side, I favored the par-three 6th hole, a little devil of delight at only 121 yards from the tips. The tee shot plays over the previously cited stone wall (nicely lowered this year for better sight lines) toward a slightly elevated green encircled by waste areas, grassy depressions and a yawning bunker. It doesn’t sound too testing but it is, due to subtle ebb and flow of the green complex.

If only Patrick Reed had studied this overview of the 14th

On the back, I joined a chorus of admirers for the short par-four 14th hole, recently named by the Naples Daily News as one of its “Dream 18” golf holes. With yardages ranging from 247 to 295 yards, it poses both bold and benign choices off the tee. The safe play is mid-iron or hybrid leaving a full shot into the peninsular-shaped green, well-guarded by water and unforgiving coral rock. But players have gone for the green as well. A case in point occurred several years ago during the club’s renowned Terra Cotta Invitational, a 54-hole medal play tourney for top amateurs and college standouts. With Pedro on his bag, Augusta State’s Patrick Reed (yes, that Patrick Reed of Doral fame) was in contention when he reached the 14th tee during the final round. True to form, Reed went for the flag and his tee ball found the hazard on the coral rock bordering the green. Eschewing a more sensible drop and a one-stroke penalty, Reed attempted instead a risky second shot out of the rocks. As Pedro related, Reed thought the gallery “deserved” such a shot. The result was an inevitable carom off the rocks, over the green and into the drink, resulting in a ruinous double-bogey. Hey, life is for learning, Patrick, and you joined a classroom of fellow pupils at the 14th.

1o. The Updike factor—Bill Safrin is the affable head golf professional at NNGC. Up north, he’s known as the long time (30 years +) head pro at the venerable Myopia Hunt Club in Massachusetts. “Venerable” may be defined as a club that’s hosted four of the first 14 U.S. Opens. It’s also the club that counted among its members one of American literature’s towering figures, the late John Updike, someone with whom I once brushed shoulders at the Masters.

I didn’t ask Safrin if Updike ever played Naples National but I’m certain the acclaimed author would have felt at home under Safrin’s and Pedro’s wings. Come to think about it: the golf experience at NNGC mirrors the many talents and traits of Updike himself—urbane, neatly attired, challenging, eloquent and telling a most captivating story.