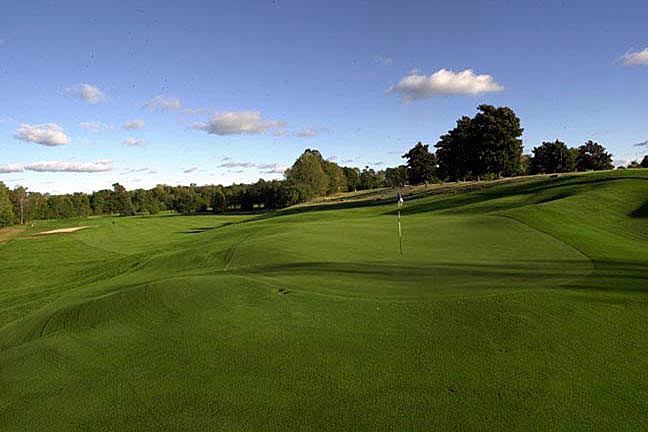 If you’re anywhere up north and you love golf and its history, you should visit Belvedere Golf Club in Charlevoix. On Friday and Saturday (June 21-22), it’s hosting the U.S. Hickory Open attracting the best players in the country and abroad skilled at using authentic hickory-shafted golf clubs. Long one of the favorite courses in the state and highly rated by national golf magazines, Belvedere is ideally suited to host this unique national championship. For one, it boasts a slew of members who regularly play with hickory clubs. Says Marty Joy, head golf professional: “Here at Belvedere we have the most hickory society golfers of any club in the country,” he said. “We have 44 men and women who are members here who play with antique hickory golf clubs. A lot of our members will be playing in the U.S. Hickory Open.”

Belvedere’s classic and walkable design also make it a perfect fit for the championship. It’s a design of William Watson, acclaimed also for his work at the Olympic Club in San Francisco and Olympia Fields in Chicago. It was a favorite of legendary golfer Walter Hagen and also Tom Watson whose family used to summer at nearby Walloon Lake.

But back to this year and the U.S. Hickory Open. In tracing the game’s history, hickory was not the preferred material for clubs in the 17th century. Club heads were made from hardy woods such as beech, apple and holly. These were connected to the shaft using a splint and bound using leather straps. It wasn’t until the mid-1800s that hickory became the choice for golf clubs. Scottish club makers used hickory imported from America to make shafts that were originally used for axe handles. Soon hickory became widely known for its strength and durability while not being too flexible and heavy. By the 1890s, hickory was the primary wood for golf shafts.

A fine player of hickory clubs, Joy admits it took him four years to find a hickory-shafted driver with which he felt comfortable. “For most players there’s no such thing as a matched set. It’s usually a mutt group of irons and woods,” says Joy,  a winner of a Hickory Tournament in only his second attempt.  “I love the challenge of playing with vintage clubs. Making a par or even a bogey is a thrill. The sweet spot on these clubs is the size of a dime,” said Joy. “Hickory tournaments allowed me to start over with a game I love.”

Adding to the charm of the U.S. Hickory Open will be sight of many players wearing garb from the early 20th century. In others words, there’ll be plenty of plus fours, neckties and caps.

“It’s quite a sight,” said Ernie Ernst, chairman of the tournament’s selection committee and a resident of Wisconsin. “Some guys wear the clothes to honor that era of golf. Others wear the clothes because they really like to dress up. The bottom line is it announces our presence. You can’t miss a group of us on the golf course.”

Tournament viewing is free and open to the public. For another tease about the event, check out a wonderful video about the tournament and host club narrated by Belvedere Club member and famed sports announcer Mike Tirico: https://vimeo.com/283800506