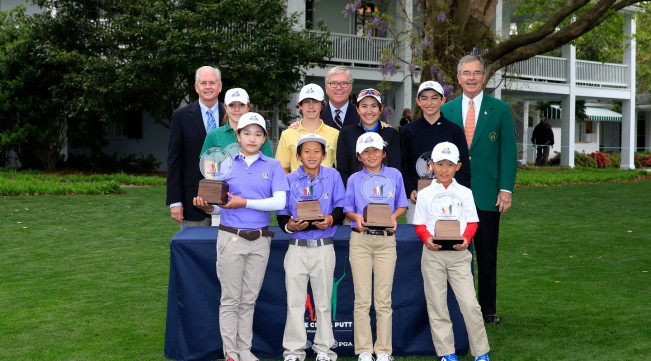 The winners of the Drive, Chip & Putt Finals

Pity defending champion Adam Scott and his fellow Masters competitors this week. Contrary to trusted show business advice, they now must follow a smashing “kids’ act” on stage at Augusta National. I’m referring, of course, to the wildly successful debut of the Drive, Chip & Putt National Finals held today at the storied club, home of the Masters. On a cloudy and overcast day with cool temperatures, 88 juniors competed in four age groups for both boys and girls. It was a culmination of more than a year’s preparation which included local and regional qualifying events that attracted 17,000 youngsters from around the country.

The day’s success was best summed up by nine-year-old Kelly Xu who captured the Girls 7-9 age group title. When asked in the media center what did she know about the Masters before she came here, she said in part, “…this is a once-in-a-lifetime and I shouldn’t miss this chance. It’s really a huge privilege to come here.” Echoing her was the equally wise beyond her years Natalie Pietromonaco, 13, winner of the Girls 12-13 group: “…This was a life-changing experience for me and how great the people out here treated us, and that it was just such an amazing experience to come out here and be able to practice at the world’s best golf course.”

Being a collaborative effort by the Masters Tournament Foundation, the USGA and PGA of America no one entity or person is being credited for this exemplary “growth of the game” initiative. But if truth be told, Billy Payne, Augusta National’s visionary chairman, must be singled out for this outstanding and historic addition to Masters week. Since being named club chairman in 2006 and following the controversial Hootie Johnson, Payne has boldly added a number of important measures aimed not only to advance and to broaden the Masters brand and its audience but to help give a needed boost to the flagging game itself. Remember now, Payne’s the guy who started the Masters Junior Patron program by which youngsters are admitted free to the Masters if accompanied by a badge-holding patron. He’s also the guy who permitted televising the Par-3 event, now overflowing with wholesome and family-friendly imagery of Tour stars’ children in little caddie outfits. And last year, Payne announced that two females have joined the once all-male membership ranks of Augusta National, thus putting that heated media matter behind him and the club. In sum, Payne has guided the Masters with a deft, smart, and forward-thinking touch. Add the Drive, Chip & Putt National Finals to his growing and impressive legacy.