“And if you play golf, you’re my friend”

Last year when reflecting upon playing at Austin Country Club, home to Harvey Penick— the late instructor, coach and renowned golf professional—I recalled the words of an Irish friend and Dublin resident. He was commenting about the time President Bill Clinton first played the famed old links at Ballybunion in 1998. “Yes, we Irish were very proud that day,” said my friend who worked for the Irish Tourist Board, “but can you believe they played Ballybunion in a fivesome? Oh, the shame of it!”

Well, I must confess I played Austin CC in a fivesome but due to the good graces bestowed by the starter and my congenial golf partners, the shame of such a grouping on a Saturday morning was thankfully dismissed. Besides, our group walked and played at a nice pace and didn’t create any bottlenecks. In fact, the only shame encountered was mine when looking at my ruinous scorecard afterwards. In our casual round robin team match, I treated my designated partners fairly and equally: I let them all down. But I digress.

A private club, Austin CC is located in the scenic Texas Hill Country, in the Davenport Ranch area on the northwest side of the booming capital. It’s a beautiful setting for the Pete Dye-designed layout.

The course boasts an inviting contrast between the front and back nines. The front nine is marked by holes 3-7 in the “lowlands” of the property with gorgeous views of Lake Austin. 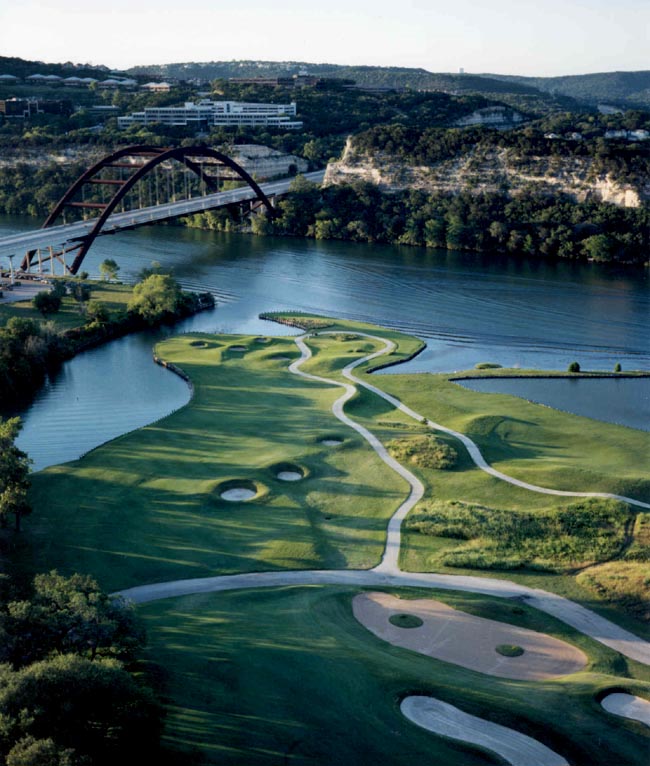 My favorite hole in this stretch was the short par-five third hole. It’s a downhill gem with smart fairway bunkering on the right and water on the left and where accuracy and finding the best angle to the green are a must. Its reminiscent of Dye’s famed par-five 16th at TPC Sawgrass. Best of all, the green— guarded by water and bunkers—has a wonderful backdrop: the majestic Pennybacker Bridge. A trademark of Dye’s genius is discovering the primary landforms and indigenous gifts of a property and then routing and building golf holes through and around them. On this occasion Lake Austin and an iconic man-made span create an eye-pleasing, one-two wallop of a golf panorama.

The back nine is nestled in the “highlands” of the property. Tighter and more confined, its Hill Country setting demands concentration and sound shotmaking. In an apt architectural touch, native limestone slabs serve as bold and striking revetments for several tees, greens and fairways. Such is the case at the 13th hole where enormous slabs of limestone are stacked and layered to create dramatic tee boxes at this trouble-laden par-three.

There are many notable holes on the back nine at ACC but it’s hard to match the par-four 18th. It’s a long hole but if one hits a strong drive a downward stretch of the fairway adds bonus yardage. That’s a good thing because even after a good tee-ball, you’re faced with a daunting second shot over a ravine to reach the heart of the green. To his credit, Dye offers a safer route toward the green by aiming away from the abyss yet farther from the flag. In a sense, it’s a risk-reward par-four. A marvelous yet nervous finish to the round, the 18th says: bite off as much as your game, gumption and wagering status will allow.

So how would I describe the playing experience at Austin CC? Having played several Pete Dye courses before, I was prepared for his rigorous style of golf design. It’s tough yet fair, where par must be wrestled with on almost every hole. It’s not a proverbial walk in the park or in the Texas Hill County, although the scenery and overall course conditions are exemplary. Deep bunkers, undulating fairways that defy level lies, cross hazards, ravines and canyons, all contribute to a higher championship standard. In so many words, that’s probably the marching orders given Dye back in 1984 when ACC moved from its previous east Austin cozy environs. It was the era of designing harder new golf courses where target golf and an aerial approach to the green prevailed.

On this note, when interviewing Dye a few years ago, I asked him what’s the most misunderstood aspect about being an architect. He said: “In spite of what some people think, I’m always conscious of the type of players I’m building the course for.” In other words, the architect undoubtedly delivered the type of course envisioned and requested by the club.

Note: Dye will oversee a major restoration of the course, including rebuilding the greens to USGA specs, in 2015. ACC will be closed from Jan. 1 to Oct. 1.

For first-timers like me, ACC is best viewed as a stirring match play course where its penal features should be taken with a grain of salt while not being too score conscious. Finding the proper tees to match one’s game and expectations is paramount, too. Finally, it’s a course that compels members to be better and more complete players because of the diverse skills needed to score well here. As such, it’s no surprise to learn the club has hosted numerous state championships and USGA qualifiers as well as the prestigious Harvey Penick Invitational, a 54-hole medal play tournament attracting an elite field of mid-am and senior amateurs.

But my best takeaway about Austin CC was not about its Pete Dye-designed course, its palatial clubhouse and amenities, its spacious dining areas, its grand trophy cases and thoughtful historical displays, its tennis courts and swimming pool, or even its Harvey Penick learning center. Indeed, they were all noteworthy.

No, for me it was the friendly demeanor and down-to-earth manner of my golf companions led by Mike Edgar, my good-natured host. A fine player and the current Senior Club champion, Edgar was an ideal guide for me to experience and relish Austin CC. Besides his savvy playing suggestions, he shared many stories about “Mr. Penick” and several humorous happenstances about members and guests. I also liked how Edgar attached a transistor radio to his speed cart in order to listen to his beloved Texas Longhorns on the back nine. When playing on a Saturday fall afternoon back in Michigan, I’ve done the same.

He also gave me a tour of the expansive clubhouse, its many fitting homages to Penick, and its impressive casual and dining areas. After he pointed out—with a smirk—a massive climate-controlled wine cabinet in the formal dining room, the unpretentious Edgar quipped: “I’d really like to see some milk and eggs in there to balance it out.” Loved it.

And then a few moments later when touring the outdoor seating areas, Edgar stopped our conversation when noticing an employee coming our way, carrying a tray. He immediately went back to hold the door open for the employee going back into the dining room. It was a small act of courtesy and kindness, but it revealed all I needed know about the type of members I met and came to know that Saturday. As a part of a fivesome, no less.

As I drove out of the club’s parking lot, I mused about the words of another native Irishman and golf writer. He said: “There are three joys in golf: how you played; where you played; and who you played with. The first two are overrated. It’s really about spending time with friends, old and new.”

That’s my best takeaway about Austin Country Club. That and not falling into a canyon.

Note: A special thank you to Roger Terry for arranging my introduction to Austin CC. A kindred spirit and an author of an upcoming book about ACC, Roger’s business card reads: “Recreational golf by appointment only.”

One Response to “Austin Country Club”