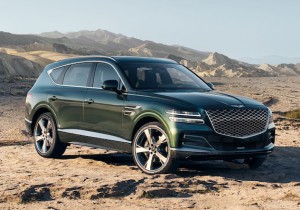 When the news flashed across the TV screen on Tuesday about Tiger Woods’ car accident, one’s immediate attention focused on his medical condition. It was natural to consider not whether this was a life-threatening accident but whether it was a career-ending event. Would Tiger ever compete again on the golf course? In the days ahead, we’ll get more details on his condition and the chances and timetable for his recovery and rehab. But one thing is certain: Tiger’s determination and willpower will meet and most likely surmount any physical challenge.

In the wall-to-wall media coverage of the accident, the vehicle he was driving—a 2021 Genesis GV80—took on a life of its own. On Tuesday, it was fascinating to watch the various news outlets carefully track how the overturned vehicle was recovered by tow trucks and then transported to a garage. Its entire trip was televised. It brought to mind the coverage of O.J. Simpson’s Ford Bronco on the LA freeways while pursued by law enforcement.

It was not the product publicity that Genesis sought when it associated with Tiger Woods to become the title sponsor of the PGA Tour stop last weekend at Riviera CC. But given that Woods survived a terrible high speed accident while driving the luxury SUV, there’s little question of the enormous consumer brand awareness generated by the incident. You could safely say it became the most famous SUV in America.

And most importantly, the vehicle and its safety features protected Woods from fatal injuries. Airbags deployed and the inside of the car remained intact, and that “gave him a cushion to survive the crash,” said Alex Villanueva of the LA County Sheriff’s Department.

As background, the Genesis GV80 is the only SUV in the luxury carmaker’s line-up from South Korea’s Hyundai Motors. According to its website, it boasts a 10-airbag protection system offering “protection from every angle…and engineered for optimum impact reduction.”

Because the 2021GV80 is a brand new model and its safety data has yet to be reviewed, it’s unranked by U.S. News & World Report. So, the Genesis GV80’s overall score is not available, though its Critics’ Rating is an impressive 9.7 (out of 10). However, the Genesis counterpart passenger car model—the G80—was ranked no. 1 in its class by the magazine.

As is custom when automakers sponsor a golf tournament, Genesis provided a new GV80 to Max Homa for winning the Genesis Invitational on Sunday. But it was same model driven by tournament host Tiger Woods that became the vehicle of the week.