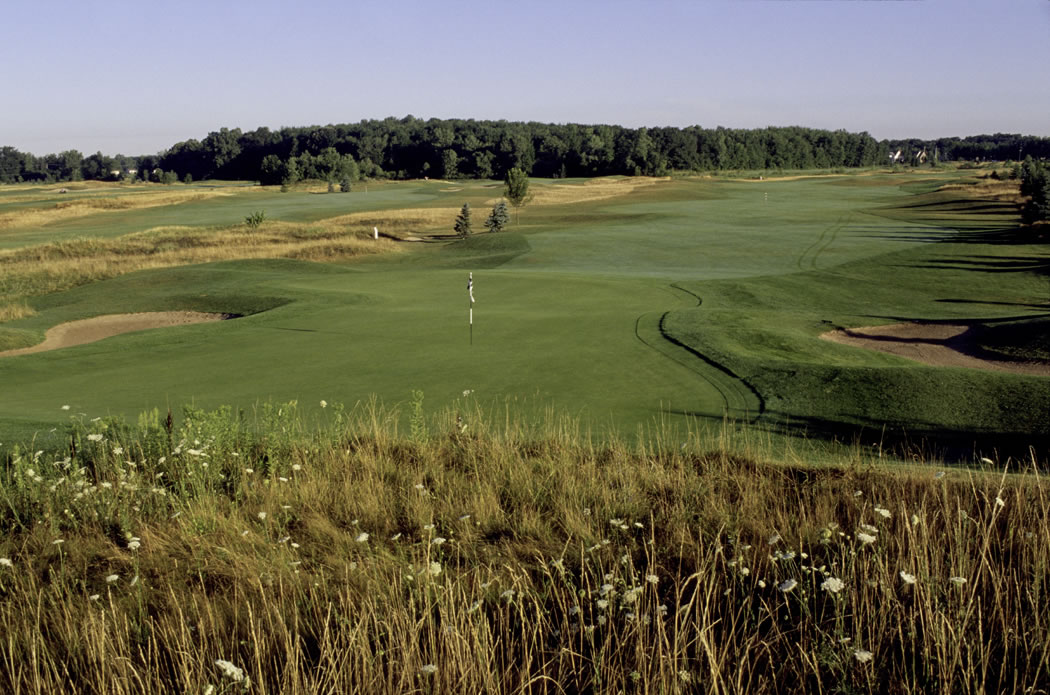 Free. NCAA National Finals. Golf. West Michigan. That’s the attractive come-on for watching  the 2014 NCAA Division II Men’s National Golf Championship this week, Monday through Friday, in Allendale, Michigan on the campus of Grand Valley State University. In all, 108 players will be competing in the tournament—20 five-member teams and eight individuals—representing colleges and universities from across the country.

The Meadows Golf Club will play host for the third time (2001, 2007, 2014) to this men’s Division II tournament, crowning both individual and team national champions. The championship will mark the eighth time the Michael Hurdzan-designed layout has hosted an NCAA finals, an unprecedented feat for a course first opened in 1994. Five NCAA Division II Women’s National Championships also have been held there—1996, 1998, 2002, 2006 and 2011—with a sixth already set for May 2015.

The loaded field contains 13 of the nation’s Top 20 teams, including the last three national champions – No. 1 Barry University (Fla.), No. 6 Nova Southeastern (Fla.) and No. 2 Cal State Monterey Bay – and six of the last seven runners-up. Incidentally, one of Barry’s players include former Forest Hills Central standout  Jared Dalga, a senior who transferred from Eastern Michigan University.

Five of the eight teams that qualified for match play at the 2013 National Championship, which was held at Hershey (Pa.) Country Club, are back again.

Additionally, 29 of the country’s Top 50 golfers will be competing in the tournament. Seven of last year’s top-14 finishers, headlined by defending national champion Tim Crouch of Florida Southern, are making return trips to one of the biggest stages in college golf.

Action begins on Monday with 18-hole tee-times starting at 7:30 a.m. and again at noon in a two-wave schedule. That same schedule is repeated on Tuesday and Wednesday when 54 holes of medal play are completed. For team tallies, the low four scores out of five are counted each day. Following 54 holes, an individual national champion is crowned while the top teams are cut to the low eight. Unlike previous finals at the Meadows, this year’s team competition has a format twist in deciding the eventual national champion.

On Thursday at 7:30 a.m., the remaining eight teams resume play and are paired off in a seeded bracket in a medal match format. Opposing coaches select their respective players to go head-to-head in five separate medal play matches—a hybrid format combining medal play with a dash of match play. This medal-match-play format, begun in 2011, allows each match to go to the 18th hole. All five matches are worth a point, which means every player counts until the end. The impetus behind the format is that it lends added drama and excitement to the team competition. As quoted in Golfweek magazine several years ago about the medal match system, California State Stanislaus head coach John Cook said:  “A lot of stuff can happen all the way down. Even if you have a four-shot lead, you can lose it on the last hole, and it happens.”

After Thursday’s morning matches, the four remaining teams are again paired off for another five individual matches in the afternoon to decide the final two teams.

On a personal note, I’ve been an enthralled spectator at all seven of the national golf finals held at the Meadows. Providing outstanding golf and spirited team play, it’s a competition that should be on every golfer’s bucket list. Did I mention it’s free?