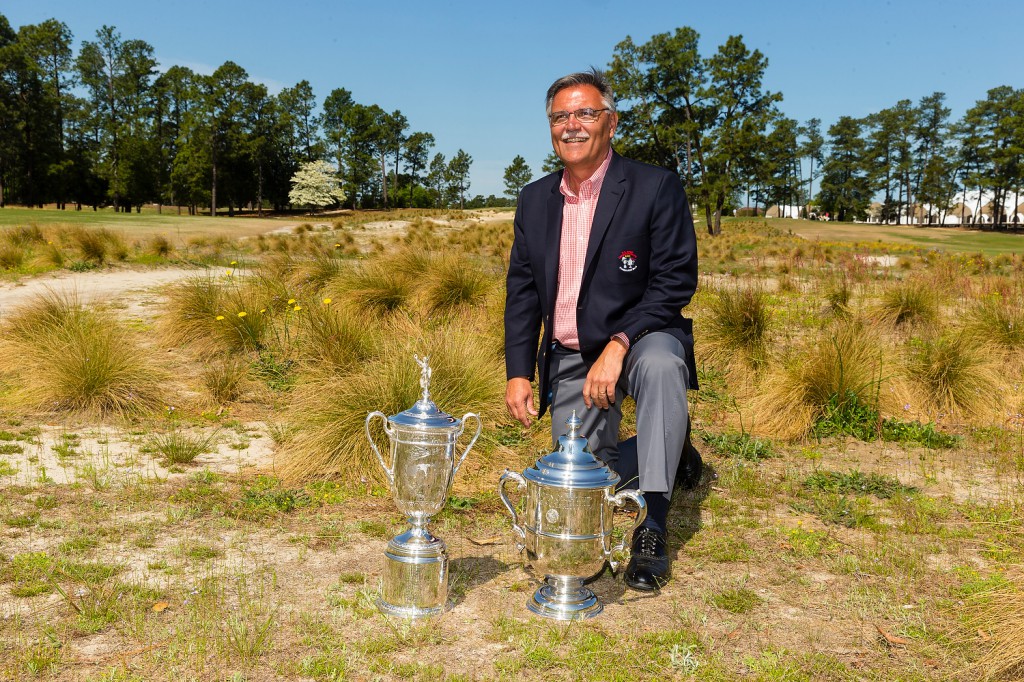 As Director of Golf Courses and Grounds at Pinehurst Resort and Country Club, Bob Farren will be a man in motion when the U.S. Opens for men and women are contested in consecutive weeks over Pinehurst’s iconic No. 2 course. Designed by Donald Ross, No. 2 underwent a dramatic renovation by architects Bill Coore and Ben Crenshaw which resulted in a reduction of 40 acres of maintained turf and eliminated 700 sprinkler heads. Along with his efforts for the upcoming U.S. Opens, Farren considers his work on No. 2 with Coore and Crenshaw as the “defining project of my career.” A GCSAA member since 1978, Farren has spent over 30 years at Pinehurst, playing a key role in numerous national championships including an unprecedented four U.S. Opens in the past 15 years. A USGA Green Section Committee member, Farren was the 2007 recipient of the Environmental Institute’s President’s Award for Environmental Stewardship. One of the most respected and highly regarded figures in the turfgrass industry, Farren is poised and confident about Pinehurst being in the spotlight for back-to-back weeks. In the words of comic Bob Newhart, he’s not necessarily nervous about the pending events but he is “incredibly alert.” He spoke at length last month on a variety of subjects with The Grain’s Terry Moore.

What inspired you to become a superintendent?

I grew up in the golf business because my father was a superintendent at a public facility in West Virginia. We lived less than a mile from that course so I was always riding my bike back and forth. I started working around my dad as soon as I was old enough. So it was in my DNA. When asked what I wanted to be when I grew up I would say, “A golf course superintendent in North Carolina.” Funny thing, I’d never been to North Carolina. To this day, I’m not sure why I mentioned it.

So how did you end up in North Carolina and Pinehurst?

As a junior at Marshall University while also working at a golf course, I attended GCSAA’s annual conference in San Antonio in 1978. I knew attending the conference would be good for my professional development. I sat in on an impressive presentation given by the head superintendent at Pinehurst, someone who had the position I hold today. That presentation planted the seed about North Carolina and Pinehurst. Three years after I graduated, I applied for an assistant superintendent’s position at Pinehurst and was hired.

It’s ironic for someone who has spent over 30 years adding, growing and watering turf at No. 2, to be asked to go in a completely different direction with its renovation. Was it all about sustainable practices?

As an industry, we’ve been addressing sustainable environmental practices for a number of years. In the high-flying ‘90s, there was an obsession with everything being perfectly manicured and maintained. Well, those standards were sustainable when people were selling golf course real estate. But those standards don’t work today. With the renovation of No. 2, we knew the environmental and sustainability aspects made for a good story but that’s not the only reason we did it. Frankly, we wanted to restore the values of the golf course to what it could and should be for the next 50 years. We wanted to uncover the spirit of the course. Really the common denominator for changes made to the Pinehurst golf courses over my entire career has been water. We’re now watering less and maintaining less acreage than in the past, which is a good thing.

Bucking an industry trend, you’re not using an army of volunteers on the grounds crew at this year’s Opens. Please explain.

We’ll be using some local volunteers and superintendents but primarily we’ll be relying on our own staff. We wanted our staff, across all of our courses, to have more of a sense of ownership and pride about hosting the Opens. Given that intense two-week period, we wanted to spread the burden and the opportunity around to all of our staff members. And we’re fortunate, unlike other Open venues, to have a large existing staff from our various courses to focus on No. 2. We wanted all eight course superintendents and their crews to be part of this historic occasion.

What nightmare scenario for the Opens would have you waking up at night? Is it the weather?

You mean, how can we screw this up? (laughing) Yes, it’s about the weather. But we have enough contingency plans in place to deal with it.  When looking back at the terrible weather at Bethpage Black (U.S. Open, 2009) and again last year at Merion, they managed to get through it on sites far worse than ours for handling heavy rainfall. Our greens shed water very well. The sandy areas and the large footprint we have for the gallery are so much bigger than at most Opens. Given all that, we can have the golf course ready even if we have heavy rain and storms. From a heat standpoint, we also have plans and practices to manage it. If I had my druthers, I’d prefer dealing with heat than storms.

In the past 30 years, how has the perception of the superintendent evolved?

Today, we’re viewed as an important resource at a golf facility. From a business perspective, what superintendents do and how they impact the bottom line are crucial for clubs and courses. Generally speaking, superintendents manage the largest budget and manage the most people at a facility. And they are problem-solvers and task-managers, too.

Do you have a favorite Superintendent’s anecdote?

One involves the discussion about trees on a golf course. Trees often block sunlight for healthy turf and when they keep growing they may infringe on what the architect intended for the golf course. We all love trees and recognize their beauty. But 50 or 100 years ago, trees may not have been planted when the course was designed and the routing was made. An architect told me recently one of his favorite stories is about a Green Chairman who asked his superintendent if he could save a particular shade tree near a green. The superintendent said: “Sure, we can save it. Do you want it in firewood length or in logs?”

Describe some of your most memorable days in your career?

One of the highlights was the completion of the 1999 U.S Open at Pinehurst. I was below the bunker on the right side of the green when Payne Stewart made his winning 15-foot par putt on the final hole.  As a memory, it became more poignant due to Payne’s untimely death later that year.

In fact, on the day of his memorial service in Orlando, Florida, we organized a brief, unrehearsed and quiet ceremony here at Pinehurst. One of our interns from Scotland played the bagpipes and he marched down No. 2’s 18th fairway. Guests and members heard him playing and began to gather around the green where we placed the flagstick in the same spot as the U.S. Open’s 72nd hole. The bagpiper stopped where Payne made his putt, saluted, and then began playing “Amazing Grace.” When he finished, the village chapel’s bells immediately started chiming. It was eerie.

To visit other preview stories of the 2014 U.S Open go to: