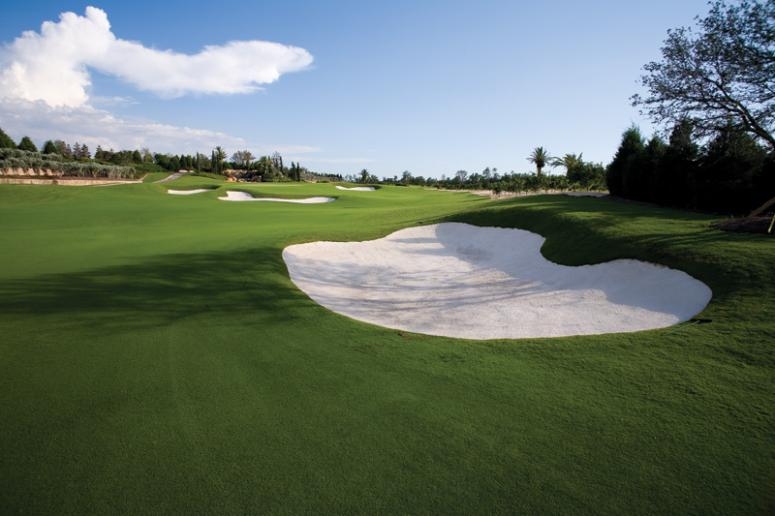 When I last played Talis Park a few years ago I found it so appealing I dubbed it my “sleeper course” for the Naples, Florida area. This Greg Norman-Pete Dye design impressed me with its winning, player-friendly design and its exceptional conditioning. At the time, its only drawback—as a gated community, not the course itself—was its low wattage curb appeal since it was still emerging from the throes of the real estate downturn. But under new, energetic ownership by Kitson & Partners, I sensed Talis Park (formerly known as Tuscany Reserve) was turning the corner.

Well, I’ve visited Talis Park again and it’s definitely turned the corner. In fact for 2014, the development recently reported “it doubled its year-over-year sales volume…new homebuyer traffic was up over 40 percent and return traffic was up an astounding 140 percent.” The report also indicated home sites in four neighborhoods were sold out. When last writing about Talis Park, I said, “it takes a village to raise a child and also a golf course community.” Suffice it to say, a bustling village is now happening at Talis Park. As my playing companion remarked that day, “the sound of machinery and equipment must be music to the developer’s ear.”

Happily, the golf course remains as sound as ever. Having played it once, the second time was even more enjoyable since I had a better sense of how to play certain holes. But its charm continues to be its non-penal yet challenging features and its top-notch course conditions. Pete Dye is a genius but sometimes he’s been unfairly maligned for designing over-the-top and too difficult golf courses. However, as I discovered in an interview with Dye two years, he’s an architect sensitive to player sensibilities. He said: “In spite of what some people think, I’m always conscious of the type of players I’m building the course for.” In other words, Dye merely follows the marching orders given him by the owners and developers.

In a successful collaboration of Dye and Norman, Talis Park—which first opened in 2006—is receptive to a wide array of players. It has wide generous fairways, modest yet eye-catching bunkering, open approaches to green sites and a dearth of forced carries. Simply put, you can play it “more on the ground” than the typical overwrought and aerial-game-required layout.

My favorite holes were its short par fours, number four on the front and number 12 on the back. Both holes require more brain than brawn and are deceivingly demanding in terms of accurate shotmaking. This time around I also relished the par-threes and how they were all distinctive and set at different angles.

But the true hallmark of Talis Park is its conditioning. It was built using SeaDwarf Paspalum, a saltwater-tolerant grass that provides an ideal playing surface for both fairways and greens. I’m not an agronomist but the advantages afforded by this grass appear to be its dense and tight root system and how well it thrives in the SW Florida heat. Besides lending a marvelous bright green appearance, this grass variety—used wall to wall at Talis Park—also gives one’s ball a nice little lift in the fairways. (You’re out of luck for shots in the rough.) But grasses, no matter how exotic, are only as good as the maintenance practices employed and monitored. On this note, the superintendent and his staff are to be complimented for the high standards evident here.

Along with a friendly and welcoming mindset by the pro shop and starter (love the daily’s pin sheet), I also made note that former Major League Baseball player and current ESPN analyst John Kruk played a few groups behind us. From what I later learned, the golf-loving Kruk is a frequent guest and fan of the course.

Leave it to the former All-Star to re-confirm my high opinion of this ballpark.