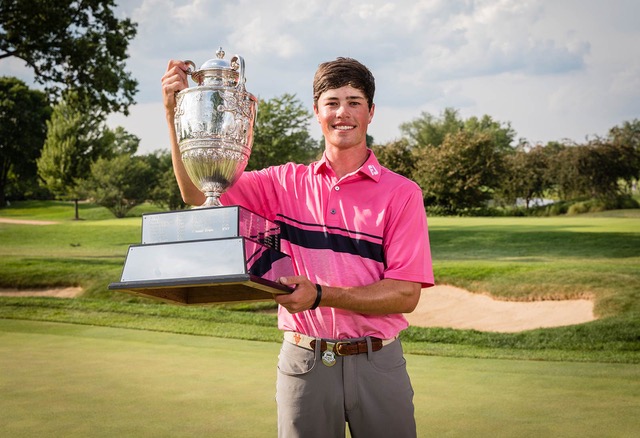 (Benton Harbor, MI) This season has been awash in Michigan hosting notable professional golf tournaments such as the inaugural Rocket Mortgage Classic (PGA Tour), the Meijer LPGA Classic, the Dow Great Lakes Invitational (LPGA) and September’s Ally Challenge (Champions Tour) at Warwick Hills. And there’s also several Symetra tournaments, too.  Professional golf has definitely rediscovered Michigan. The same can be said for elite amateur competition as the Western Amateur returns to Benton Harbor and Point O’ Woods Golf & Country Club. It’s been 11 years since the Western Amateur has been there and it’s long overdue for a return engagement.

Last month, I attended a media gathering at the Point as a preview to this year’s tournament set for July 29-Aug. 3. It was a well-organized affair highlighted by past champion Chris DiMarco as a guest speaker. Competing in that week’s U.S. Senior Open at nearby Notre Dame, DiMarco came over and provided a number of good stories and insights into his win there in 1988. For example, he recalled that in the semifinals he was four down with six holes to play against Richard Williams yet prevailed to win 1-up. In the finals, he won by the same margin against Bill Lundeen.

The win was a breakthrough moment for DiMarco. “I think winning this gave me the belief, ‘Wow, maybe I can do this as a career.’” Listening to DiMarco talk about what the Western Amateur meant to him really whetted my appetite for watching this tournament.

There are a lot of reasons to attend the Western Amateur but permit me to list my personal favorites:

The defending champion: The name’s Cole Hammer and he’s only the top-ranked amateur in the world! Entering his sophomore season at the U. of Texas, Hammer has a stellar resume including being the 2018 U.S. Four Ball Champion, 2018 U.S. Amateur co-medalist and semifinalist, and member of the U.S. World Amateur Team. If you miss him at the Point, you’ll probably see Hammer next on the PGA Tour or Korn Ferry Tour.

The field: Last week when comparing the top players on the World Amateur rankings versus the player commitments for the Western, I counted 13 players out of the top 25 in the world competing next week. Another example of the calibre of play is that the tri-medalists for the recent U.S. Junior Amateur are all entered—Ricky Castillo, William Moll and William Mouw.

In a nice touch, the club champion of the host venue, Matt Zerbel, was given an exemption into the tourney. I was fortunate to play with Zerbel and this young man can really move it out off of the tee. Without exaggeration, his drives were often 100 yards ahead of his media playing companions last month. Check him out.

The format: There’s little argument the Western Amateur has the most refined format in golf. The field will play 18 holes of individual stroke play on Tuesday and Wednesday, after which it is cut to the low 44 scores and ties. The remaining players will play 36 holes of individual stroke play on Thursday to determine the low 16 finishers. The “Sweet Sixteen” will compete in Match Play on Friday and Saturday to decide the champion. Don’t expect the champion or his caddy to go out dancing on Saturday night.

History: The Western Amateur is in its 117th edition and boasts being the third oldest amateur golf tournament in the world, following the British and U.S. Amateurs. Its past champions are some of the greats in the game including Chick Evans (eight-time winner), Francis Ouimet, Jack Nicklaus, Tiger Woods, Ben Crenshaw, Justin Leonard, Phil Mickelson, Curtis Strange, Hal Sutton, Lanny Wadkins, and Tom Weiskopf. From my scrutiny, only one player with Michigan roots is a former champion. Bob Babblsh, a Michigan Golf Hall of Fame member, won the crown 1-up in 1938. Incidentally, Michigan’s Chuck Kocsis was runner-up in 1937 at Los Angeles CC while the U.P.’s Mick Soli lost in the ’76 finals at the Point.

Western Golf Association (WGA): The organizing body of the Western is the WGA, founded in 1899 as one of the oldest golf organizations in the game. It sponsors three major tournaments: the Western Junior, the Western Amateur and the BMW Championship, the penultimate  FedEx Cup playoff event. But the WGA is also responsible since 1930 for administering the Evans Scholars Program which allows deserving and high academic-achieving caddies to receive free tuition and housing at 19 universities (including Michigan and Michigan State) in the U.S. Currently, there are 965 Scholars attending a university. More than 10,600 caddies have graduated from college as Evans Scholars.

The 18th at the Point

The Course: It’s not a stretch to say Point O’ Woods is one of the best clubs in the state. Designed by the esteemed Robert Trent Jones, it’s a worthy and woodsy test for the young lions of the game. In its heyday, its sheer length and tree-lined fairways were barriers to scoring. Today’s technology and equipment have dulled some of the Point’s fangs but it’s still plenty tough. Jones’s trademark long rectangular tees, large greens and championship bunkering are all in evidence here. For mere mortals, the course embodies Jones’s oft-quoted philosophy that every hole should be a hard par but an easy bogey. For favorite viewing holes, I favor the short par-four 8th hole, the par-three 9th, the par-three 17th and the par-four 18th. Plus, there’s plenty of shade at the Point.

Do yourself a favor and attend the Western Amateur at Point O’ Woods. The memories of watching the future greats of the game will linger.

Images courtesy of the WGA and Point O’ Woods