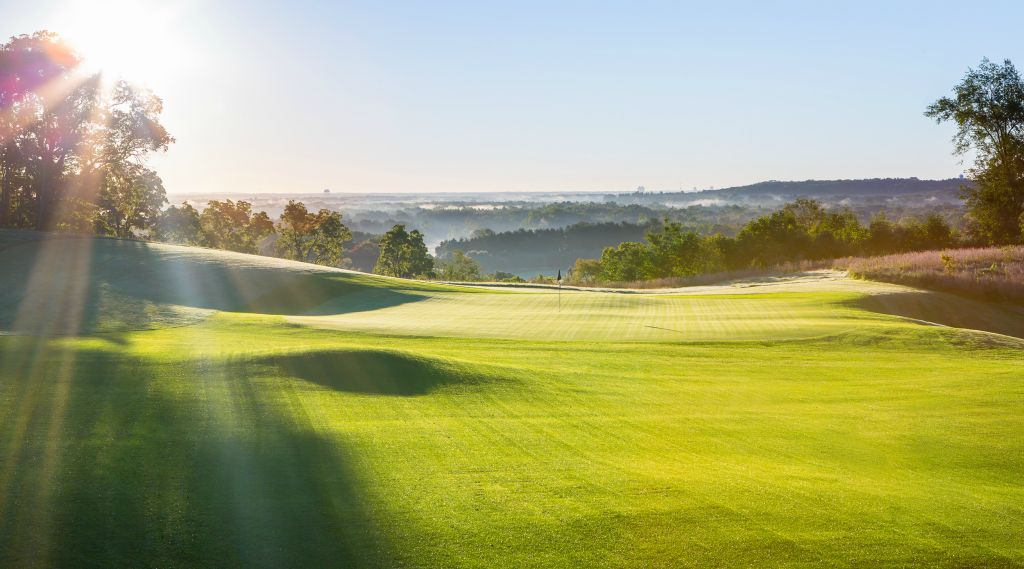 If there is one thing I’ve learned about reviewing new golf courses, it’s not playing them too early. New courses are like new restaurants: they need time to get settled. Often it’s unfair to review a course when it hasn’t fully grown in and matured. Course conditions, especially fairways and greens, make up a large part of one’s assessment of a new track so it’s best to wait for Mother Nature to do her thing.

Such was my case with Stoatin Brae, the course that opened a few years ago as part of Gull Lake View’s fine collection of six courses. As much as I was intrigued with the layout, the work of Tom Doak’s Renaissance Golf Design in Traverse City, I resisted the temptation to play until I heard it had matured. I can happily report the course conditions at Stoatin Brae are very good and are heading in the right direction for a links-inspired turf. So my first impressions of it are favorable and the positives heavily outweigh any shortcomings one may find.

First off, the name means “Grand Hill” in Gaelic and the drive up to the clubhouse is testimony to its apt name. Located in Augusta, Mich, on one of the highest elevations in Kalamazoo County, Stoatin Brae commands an ideal perch for a golf course. And the routing and golf holes match it perfectly.

As one of the lead designers for the course, Eric Iverson said the property was “love at first sight.” In a recent interview with me, Iverson said he was “absolutely taken by the property even before I got out of the car.” Seeing 150 aces of land with few trees and with gently sloping terrain meant many built-in advantages for designing a golf course. “It didn’t require clearing, offered a beautiful prairie landscape and one could see virtually the entire property from end to end, hedge to hedge.” Iverson’s only concern was if the property was wide enough to accommodate the layout. “But once we sorted out the routing and realized all 18 holes would fit in nicely, we all felt relieved,” said Iverson. 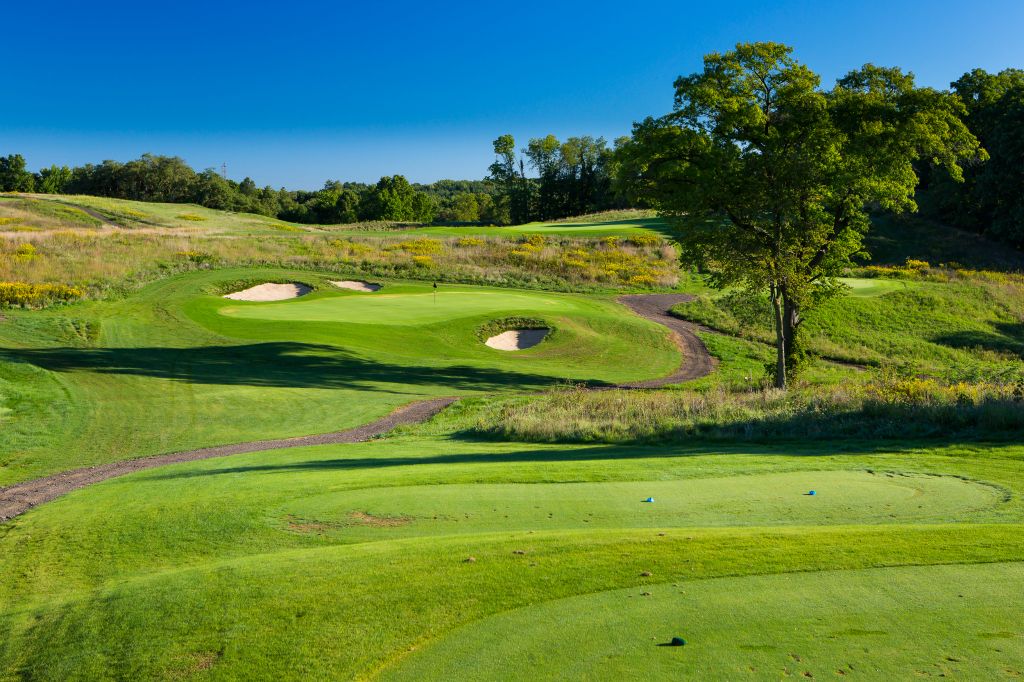 There are only a few trees at Stoatin Brae

At this point, I should add although Renaissance Golf Design was responsible for the design at Stoatin Brae, its founder Tom Doak was not involved with this project. He was busy with other jobs around the globe. But his roster of able senior designers—Eric Iverson, Brian Schneider, Brian Slawnik and Don Placek—all had a hand at Stoatin Brae. Hence, the course features all of Doak’s celebrated minimalist design elements.

On this note, let me quote Master Doak as to the essence of minimalism: “It’s objective is simply to route as many holes as possible whose main features already exist in the landscape, and accent their strategies without over killing the number of hazards.”

Iverson reported that only one hole required significant grading to make it fit with this objective. “We didn’t need to disturb too much what we found.” More on that later.

Golfers will find broad fairways, bouncy turf and open front greens, a touch of the Old Sod on this side of the Big Pond. The wide fairways are a reason a special grass was chosen. Called slow-mo bluegrass, it offers greater wear tolerance from carts while being less expensive. Renaissance used it for a course in Montana and it proved to be a great success.

Stoatin Brae’s greens superintendent Mike Wallace added that the turf lends itself to lower maintenance, dries out well, and stands straight up to enhance playability. The fairways alone comprise over 40 acres here while a typical layout averages only 24 acres. So the corridors are expansive and inviting for the most wayward of drivers.

Although we took carts, it’s very walkable and has some wonderful views of the countryside. We liked how the course gently opened up with a downwind short par four with nary a green side bunker. We also noticed and admired the shaggy-face bunkers with the wispy fescue round their top edges. It’s a touch usually found at private or resort courses but seldom at daily fees. And there are few if any cross hazards with which to contend. Instead there are devilish false fronts and sloping greens to beguile one’s approach shots.

According to Wallace, green speeds are usually 9.5 but on the day we played they were much slower. Of course, our group did agree that a slower green speed did help to handle the putts on the more undulating greens. But generally speaking a faster pace would’ve been more desirable. Wallace said they roll the greens Thursday to Sunday.

There are many handsome holes found at Stoatin Brae. I particularly liked the par-four 12th at the far eastern end of the property. It requires a stout and stoat drive across a ravine to a short downhill green. Oddly enough, Iverson said the hole “unlocked” the routing of the course. The designers needed to find one more par-four and they found it here after knocking down a ridge to make it more playable. And at this end of the course, golfers will be able to catch a glimpse of Stonehedge, one of Gull Lake View’s other courses.

We also admired the par-five 16th which shares an airport-wide fairway with the par-four 3rd hole.

Besides the slower than normal green speeds, the only shortcomings voiced were the severity of grasses outside the rough line.  And in June when we played, the ball sunk down in the rough making it difficult to advance the ball. Admittedly the spring was unusually wet which made cutting the roughs problematic. A native grass—called Blue Stem— is plentiful and the name was chosen for the restaurant which is receiving favorable reviews for its menu and attractive views.

Stoatin Brae is still a work in progress with plans for more cart paths where needed. But all in all, it’s a course that’s a worthy addition to the strong contingent of courses found at Gull Lake View.

Finally, I admire owner Jon Scott, a third generation member of the noted golf family, for boldly reaching out to Renaissance Golf Design to devise a golf course that’s completely different from the other courses at Gull Lake View. That pivotal decision was reached after Scott’s visit to Bandon Dunes in Oregon. Scott returned to Michigan knowing he and Gull Lake View “couldn’t stand pat.” Instead, he wanted to grow the game with a different golf experience.

And how would one succinctly describe the Stoatin Brae experience? Well, maybe a little Gaelic is again best employed.