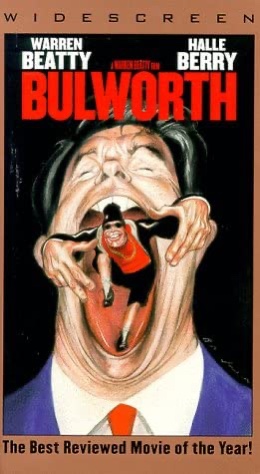 Twenty-two years ago this summer, I wrote a column inspired by Bulworth, a satirical and dark comedy movie released that year about a fictitious political figure, U.S. Senator Jay Billington Bulworth from California. As with Network, the 1976 classic and award-winning film about a fictional TV network and its ‘off the rails’ and truth-spewing anchor, Bulworth provoked considerable buzz and attention at the time. As portrayed by director and co-screenwriter Warren Beatty, Bulworth revives his flagging political career by his outrageously frank and offensive statements of “unspeakable truths” —often told in irreverent rapping— which makes him a media sensation. Like Network, the film still holds up today for its cultural and societal messages and its sharp, cogent writing.

I also like this comment about it from film reviewer Andy Johnston, “More than anything else, Bulworth is descended from Preston Sturges’s topical farces of the 1940s, which juxtaposed a deep belief in the promise of America with irreverent attacks on the hypocrisy of its institutions.”

Anyway, I got to thinking about this Bulworth column due to ongoing recent events and controversies. Last month, the PGA of America removed the name of Horton Smith—the two-time Masters winner and former Detroit Golf Club head pro—from one of its prestigious national awards. Smith was also president of the PGA from 1952-’54 and was a strong proponent of the organization’s Caucasian-only clause, which was part of the PGA’s bylaws from 1934-’61.

More recently, Horton Smith’s name was dropped from one of the premier state amateur invitational tournaments, held since 1971 at Detroit GC as a 72-hole medal play championship.

In this unsettling time of ‘reckoning,’ I reckoned my interview with Sen. Bulworth deserved to be dusted off. —Terry Moore, August, 2020 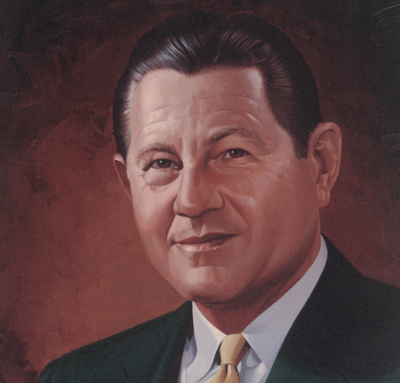 Michigan Golfer is pleased to publish excerpts of an interview with Senator Jay Bulworth, irreverent star of the satirical movie of the same name…Warning: readers foreign to this movie may find this column injurious to their golf sensibility.

MG: Sen. Bulworth, thank you for joining us.

Sen. Bulworth: Well, I didn’t have much choice, did I? My campaign advisors tell me the “golfer demo” is rising on par with the “soccer mom” phenomenon as a key voter segment. So here I am. Hell, I don’t play golf anymore—it’s too damn expensive and too slow.

MG: But you must admit, it’s a wonderful game with a great tradition and it’s good exercise.

Sen. Bulworth: Great tradition? Surely, you’re speaking of how one of the game’s ruling bodies once outlawed blacks from becoming golf professionals and made certain of it by placing it in its by-laws. Or are you referring to how golf has been the tremendous “social leveler” over the years? Weren’t most early golf professionals treated like “untouchables” by the monied class at country clubs? Or are you referring to more recent “traditions” such as the PGA TOUR not allowing a bona fide handicapped person some reasonable accommodation to pursue his livelihood?

MG: OK, but when you played golf you must’ve loved being outdoors and in the beauty of nature?

Sen. Bulworth: Beauty of nature? You mean, riding a mandatory cart on over-watered and over-manicured turf that’s ridiculously costly to maintain? Now at least in Ireland and Great Britain, they’re not afraid to allow the turf to be naturally brown—which I understand is far more healthy for the turf anyway. But to rap: it’s obscene not to be really green.

MG: Now you’re not saying golf is bad for the environment?

Sen. Bulworth: Of course not, the golf lobby is well-positioned around Congress. And that superintendent association of yours sure knew how to counter-attack the tree-huggers when it came to environmental concerns. But let’s face it, there’s too many lobbyists and legislators playing golf for fun and business for any bill to ever come up harmful to golf. It all boils down to this: there’s a lot of money and power around golf. My late friend Sen. Huey Long Jr., chairman of the powerful Senate Finance Committee, once defended the two martini lunch deduction by saying, “Business lunches are the fertilizers of capitalism.” To rap: golf is one potent potash for the deal, McNeil.

MG: All right, but what’s really bothering you. Senator?

Sen. Bulworth: Well, I’m wondering why even the death of a nice club pro who finally realized his dream by winning the Senior Players Championship last year hasn’t jolted the golf industry about the hypocrisy of cigar smoking. 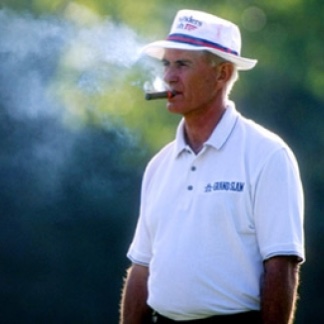 MG: Are you referring to Larry Gilbert?

Sen. Bulworth: Yes, the late defending champion of your Dearborn, Ford-sponsored event. Poor Larry—he gave up cigar smoking only when he discovered his lung cancer was inoperable… Gotta give the cigar industry an A+ for this marketing miracle. In a time when most cigarette smokers are social outcasts—and considering the effects of secondary smoke for valid reasons, too—all of sudden in a span of a few years cigar smoking around golf is now chic and the “in” thing to do.

Sen. Bulworth: Considering the state of priorities—violence in schools, child care, drug abuse, out of wedlock birthrates—I wouldn’t place it high on the legislative agenda. But I thought golfers were smart. Instead, they’re obviously the lemmings of a well-constructed marketing and public relations campaign by the cigar industry. Hey, it’s just Joe Camel dressed in 100% cotton, playing titanium, and reading Cigar Magazine with Demi Moore on the cover…

MG: Short of strict California-like measures, are there any other steps you espouse.

Sen. Bulworth: How about clubs and golf shops just stop selling cigars? Is generating a few extra bucks for an over-priced, foul-smelling tobacco product really jive with our public health common sense? The last report from the National Cancer Institute in April said this: “Cigars are not safe alternatives to cigarettes and may be addictive,” And sadly, cigar smoking is on the rise since 1993 after a 20-year decline. To rap: ignore the stats / bury your dead/make money instead/it’s a free nation/consumer celebration/don’t give a hoot/sell the cheroot…

MG: Anything else, Senator?

Sen. Bulworth: Did you say golf was going spikeless or spineless?