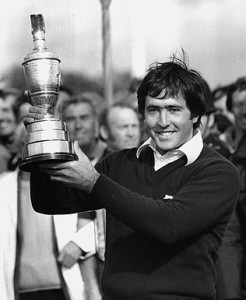 My first brush with Seve Ballesteros, the legendary Spanish golfer and five-time major champion who passed away on May 7,  occurred during a practice round at the 1985 U.S. Open at Oakland Hills CC. When I arrived at course on Tuesday the first player I sought out was the charismatic Ballesteros. Enthralled by his sand play wizardry, I was hoping to catch him working his magic in a bunker. Walking the course in reverse order, I immediately found Seve playing the difficult par-four 18th hole with Tom Seickmann, a young American pro he had befriended on the European Tour. After hitting their second shots from the fairway to the elevated green, the duo went over to the devilish fairway bunker hugging the left side of hole. (It’s the same bunker that 11 years hence would catch and spell doom for Tom Lehman, leading to a bogey on the 72nd hole and costing him the championship.)

After dropping several balls into the middle of the high-lip bunker, Seve stepped into the sand carrying a fairway wood, possibly a four-wood, and began chatting with Seickmann about what he was about to do. Crouching more than normal and leaning back in his stance, Seve opened up the face of the fairway wood and hovered it over the ball. I thought: ‘Just getting it out of the bunker would be some sort of shot—especially with a fairway wood.’

But this was Seve in his prime. Not once, not twice, but three times Seve hit the green from the bunker to the awestruck delight of Seickmann and a small gallery which fortunately included me. To this day, I’ve never witnessed a more amazing display of shotmaking. It was quintessential Seve, the self-taught sorcerer of the game.