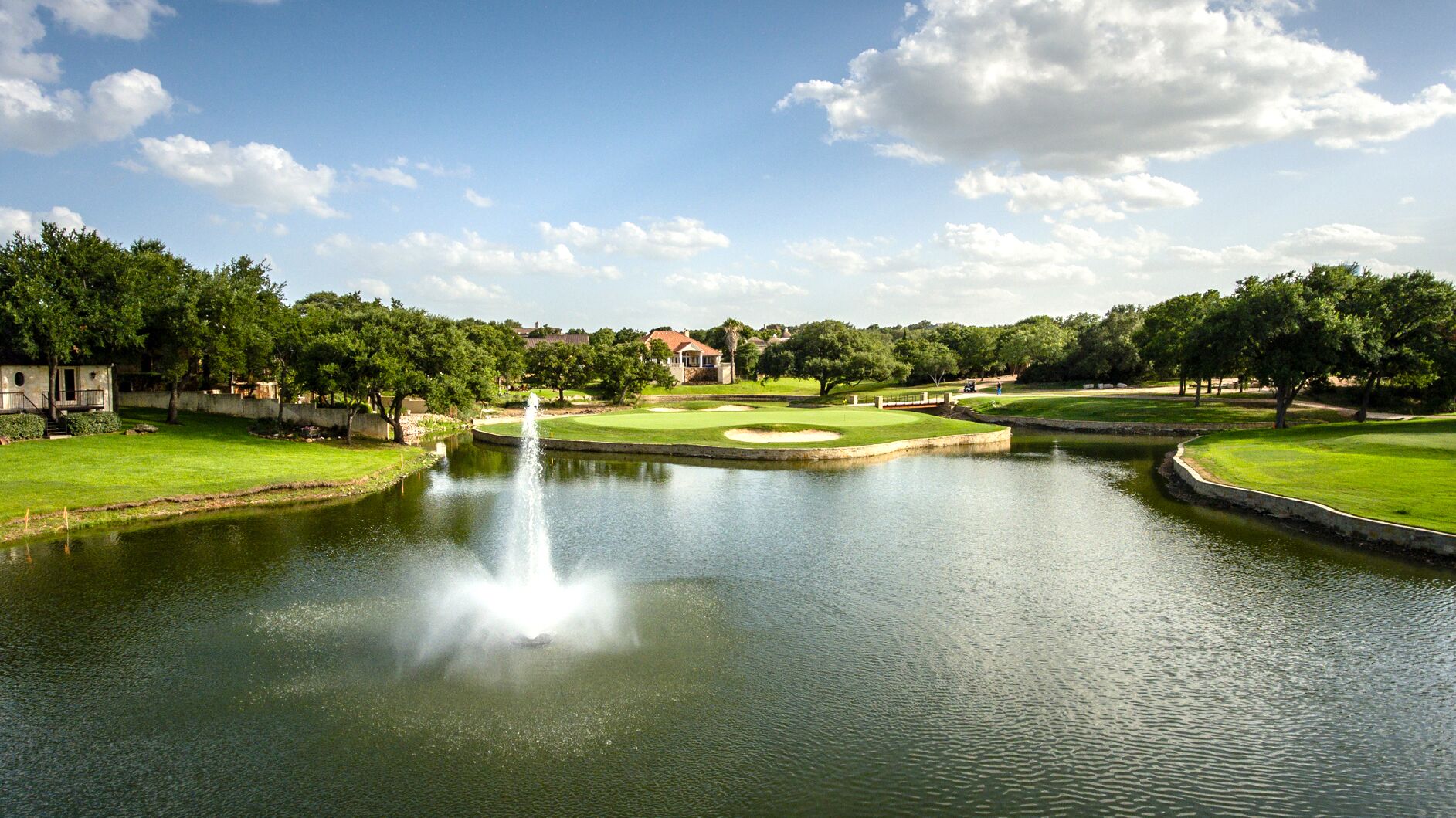 In two weeks is the World Golf Championships-Dell Technologies Match Play at Austin CC (ACC) in Austin, TX.  Having played the course the last several years, I always look forward to seeing how the Tour pros handle it in the match play format. God knows, it has handled me. Along the way, I’ve enjoyed the comments and quips of my playing companions, all senior members at ACC. Invariably, they’ll gripe about the hospitality suites and the noisy logistics surrounding the tournament. It reminded me of my days as a member of Egypt Valley CC in Ada, MI, when it hosted a Champions Tour stop for ten years. Some members never could get comfortable with the event.

Last month, I had the good fortune to play not only ACC but also Ram Rock at the recently renovated Horseshoe Bay Resort, about 45 minutes west of Austin. Horseshoe Bay is in the final stages of a $70 million makeover which has touched nearly every facet of the property, including hotel room and meeting room upgrades and extensive improvements to its three resort courses—Slick Rock, Ram Rock and Apple Rock. (There’s also a member-only course, the Jack Nicklaus-designed Summit Rock.)

During my brief stay, I toured the still-under-renovation Apple Rock one day and played Ram Rock the next. My round at Ram Rock, designed by Robert Trent Jones Sr. in 1981, was buoyed by an affable member and partner (and a good golfer) who was a helpful guide for my first time around the track. We also played briskly, in the chilly temps, as we were the first group of the day. It’s a truism in golf that nearly every round is enhanced when there’s no delays or undue waiting involved.

And here’s another truism about Ram Rock voiced by my playing partner: “You can’t take a mental break and lose your focus.” Indicative of it being a frequent host of state, college and junior competitions, Ram Rock is a fair but strong test of golf. Its nickname is “The Challenger.” However, recent renovations—formulated and approved by RTJ Design— have enhanced its playability when teeing it up at the middle and forward markers. Bunkers have been reduced in size and reconfigured with new sand added while the bent grass greens have been rebuilt to original size allowing for more pin positions.

I love how Jones both opened and closed the golf experience at Ram Rock: with spectacular views of the Texas Hill Country on the first and 18th tees. And in between there are a wonderful array of golf holes, marked by doglegs, elevated greens, forced carries, natural outcroppings, dry creek beds, deep bunkers and water hazards. There’s even an island green par-three, the 133-yard 4th hole, which will get your heart racing. For my debut round, I smartly opted for the hybrid tees (nicely listed on the card) sandwiched between the regular and executive markers at around 6100 yards but with a slope of 133. With the ball not flying due to the colder temps, it was a good choice.

All in all, Ram Rock delivered on its promise of a “challenging” golf experience. Along with the advice of not losing focus, I urge first-timers not to be hung up on medal play and being overly score conscious. You’ll enjoy the round more if you play Stableford or even match play like the big boys are doing at Austin CC. Even with the deft and friendlier renovations, rest assured it’s still Ram Tough. 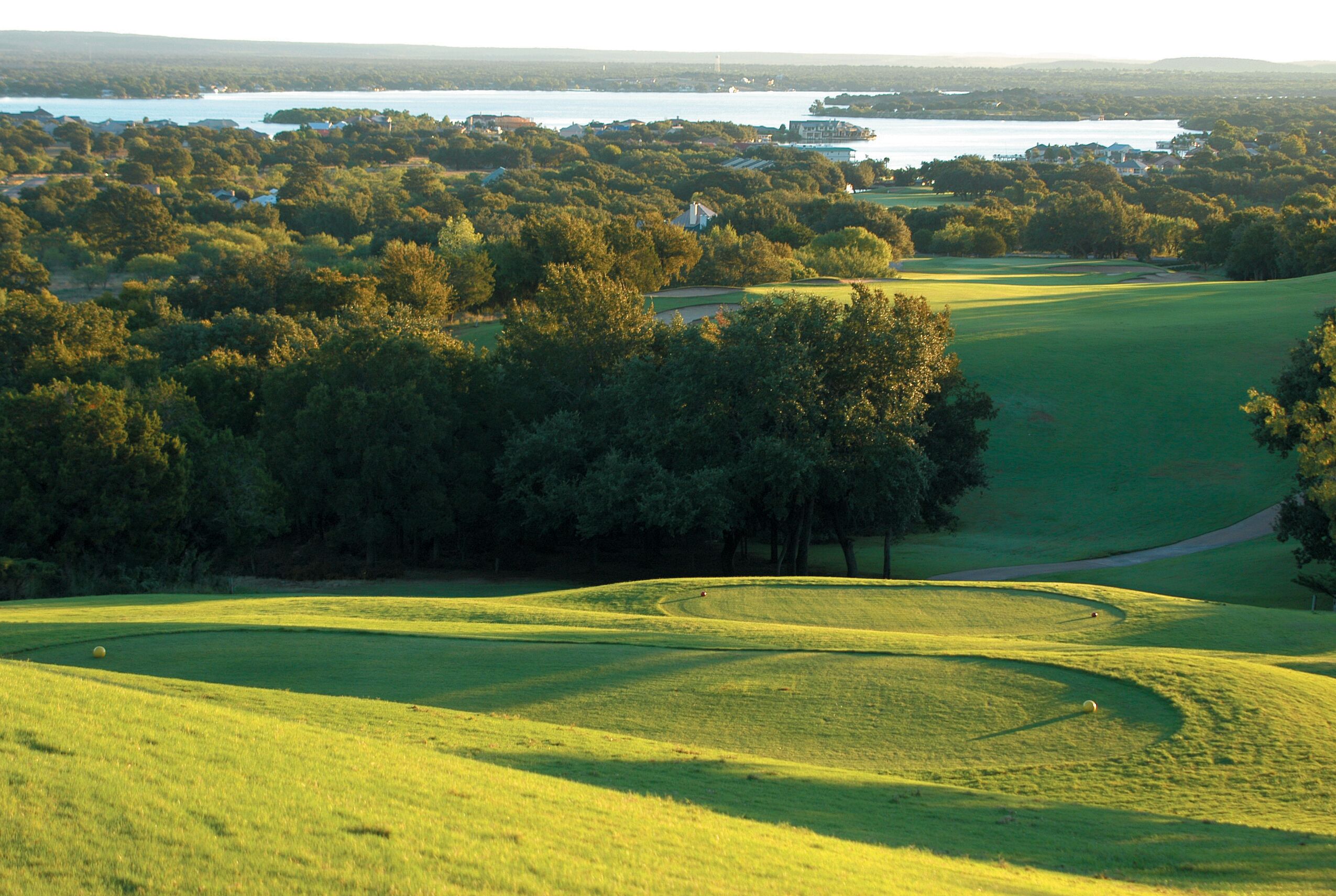 As mentioned, I was given a cart tour of the nearby Apple Rock that’ll open later this season. It’s tamer than Ram Rock but still has plenty of sharp teeth. Head Golf Pro Gary Parsons was my able guide and he pointed out how Apple Rock’s playability will be enhanced through its green and bunker renovations. Plus there’ll be continuous cart paths for the first time. Compared to Ram Rock, there are more scenic elevation changes found at Apple Rock, opened in 1985 and designed by Jones, Sr.

Golfers are afforded terrific views of Horseshoe Bay and Lake LBJ. “But level lies are at a premium,” warned Parsons. One of its standout holes is the par-three 12th which stretches along the shoreline of Lake LBJ.

Equally impressive is the new clubhouse being built that will serve both the Ram and Apple courses. Dubbed the Cap Rock Clubhouse, it will boast dining room and bar area with a pro shop, pool and outdoor areas. The views will be stunning.

As far as the resort itself, I found the perfect travel advisor-type comments during an initial visit to the main hotel’s pool and hot tub. A woman was conversing with a fellow guest about Horseshoe Bay. “This resort sure has come a long way since we were last here seven years ago,” she said amid the rising warm vapors. “Then, it was a tired property. But they have really improved and stepped up their game.”

That’s another truism: one hears the most candid opinions in a hot tub!

I won’t argue with this assessment although admittedly it was my first visit to the resort. The rooms in our two-bedroom villa were spacious, clean and well-appointed. It was ideal for my group which included my granddaughter. In terms of her opinions, well let’s just say the resort had her at the heated swimming pool. She loved it especially since we were greeted by 75 degree temperatures. 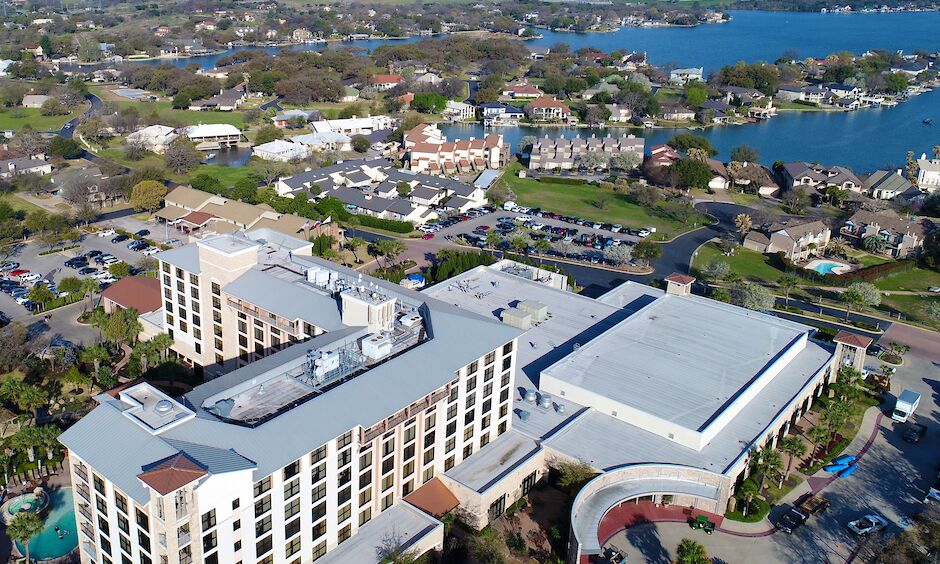 Horseshoe Bay is a full-service resort

My wife and daughter loved the walking areas and were mightily impressed, as I was, with the Himalayan putting course—called the Whitewater— near the main hotel. It’s an attractive family diversion and amenity offering an 18-hole day/night real-grass putting course.

A wedge shot away is the 360 Sports Club, a nifty destination for bar food, cocktails and live sports on more than two dozen flat screen TVs. It’s a cool spot for a golf buddy gathering, couples and families.

By the way, the resort has free shuttle service throughout the property including a short hop to the marina area overlooking Lake LBJ. There’s a great pool and cabana area there that was unfortunately not open yet for the season. But it’s a winner with sparkling views of the adjoining lake.

The resort has it all: full service spa, walking and bike trails, tennis and pickle ball courts and lots of dining options on property and off. Our first night there, we relished the pool side dining under warm and reddening skies. And our visit only got better.

Of course, just don’t take my word for it. Just visit the hot tub and get the real skinny.