Leave it to celebrated amateur and long time member Cliff Taylor to sum up his affection for his beloved Spring Lake Country Club, site of the 25th GAM Senior Amateur Championship on Sept 19-20. “It’s a treasure. For me it’s been a joy for its social and golf occasions among friends. And it’s a wonderful golf course.” An 18-time club champion and the runner-up in the 1966 Michigan Amateur, Taylor has been a member at Spring Lake since 1950. As such, he’s looking forward to the club hosting its first GAM Senior Amateur as part of its Centennial celebration this year. “It should be a great tournament and I’m certain the players will enjoy the golf course.” That’s been the verdict for years as the course annually has hosted the Spring Lake Invitational Tournament, the oldest established women’s golf tournament in the state and the second-oldest women’s match play in the U.S., dating back to 1919. The tourney was won a record ten times by Michigan Golf Hall of Fame member Patti Shook Boice. 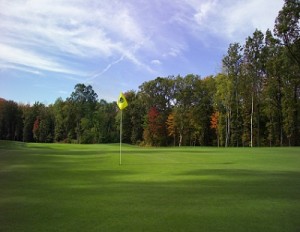 Tree-lined fairways are a hallmark of Spring Lake

To be sure, Spring Lake has come a long way since noted course architect Tom Bendelow (of Medinah CC fame) was retained for $50 and laid out a six-hole golf course in 1911. Greens were made of clay and golfers played the holes three times for a complete round. Following the addition of three more holes in 1919, Bendelow returned in 1920 to add another nine holes to the layout that borders Spring Lake which feeds into Lake Michigan.

Today, Spring Lake boasts an active and loyal golf roster of 250 members plus an additional 200 social members. Due to its walkable and friendly layout, the majority of its members prefer to walk (hooray for that!) with the club storing over 80 Speedcarts for their use. While most clubs have struggled with maintaining memberships, Spring Lake continues to thrive while being progressive in its marketing and member services. In addition to celebrating its Centennial with a number of events, including a hickory stick golf club tourney, Spring Lake has lent added value to its members by offering reciprocal golf privileges at several area private clubs. Explained Head PGA golf professional Josh Lathwell: “The idea was to offer our members some options if the event of business travel or conflicting member-guest play.” 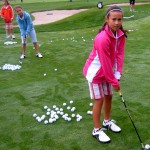 An active junior golf program ensures the next 100 years

Lathwell and the club also have kept a keen eye on the future of the game via an active junior golf program that attracts more than 120 youngsters. There are nine Wednesday mornings devoted to junior instruction and play. Depending on their age, junior golfers play one, three, six, nine or 18 holes. Longtime member Pat McGurk, who’ll be serving as the tournament director for the Senior Amateur, said the club’s family emphasis has evolved over the years. “It’s much more family-oriented than when I first joined 24 years ago. The addition of the pool in 2000 has been a positive move too,” said McGurk. Echoed newer member Steve Wooldridge: “Spring Lake is a very welcoming club. Everyone goes out their way to make you feel at home.”

But besides its membership, the heart of a club is the golf course and Spring Lake is blessed with a good one. Spread out over an ample 200 plus acres, it’s a course known for the quality of its conditioning and its many tree-lined fairways. Its superintendent is Kirk Carls who does his best, weather permitting, to deliver fast, true greens and firm fairways. “Our membership expects our greens to be fast—in the 10.5 stimp range—and we try to deliver on it,” said Carls who actually became a superintendent as his second career beginning at age 34. “And maintaining green speed is always a challenge especially during a hot, humid summer,” added Carls who’s not adverse to rolling the greens several times in the morning to get them tournament ready.

Another challenge for Carls and his staff are the many trees on the course property. In his ten years at the club, Carls estimated more than 800 trees have been removed. “The members realize the advantages of fewer trees on the course and how it will lead to better playing and turf conditions,” said Carls. In spite of these tree-clearing efforts, Spring Lake still would benefit from a more aggressive cutting and pruning program. As in the case of some many older parkland courses, too many trees and overhanging branches at Spring Lake have shrunk fairway widths and corridors to the green. Simply put, it’s not what Bendelow intended. Many clubs have followed the once controversial lead of Oakmont CC and other storied clubs by adopting their tree removal approach. It would behoove Spring Lake, inspired by its Centennial, to do the same.

In his day, Bendelow was fond of describing his courses as “sporty,” meaning his layouts “should present an enjoyable play for both beginner and advanced player, not too hard…and not without challenge.” A hundred years later, sporty is still an apt description to describe Spring Lake. It has a nice blend of par threes and par fours of various lengths. And its championship tees pegged at 6587 yards will be a fair test for the state’s best amateurs.

Its no. 1 handicap hole is the 412-yard par-four 14th hole, a slight dogleg left with a green that’s sharply pitched from back to front. Naturally, par is a good score here. I also like how the par-threes are set at varying directions and, depending upon the tee placement, require different club selection. Despite overhanging branches impeding the right side of the fairway, the par-four 18th is a good uphill finisher that demands two sound shots to the large two-tiered green. Walking off the final green, my impressions of the day were:  here is a fine golf course highlighted by excellent playing conditions.

Looking back at Spring Lake’s distinguished 100-year legacy, one would be hard-pressed to find a better and sportier return on a $50 investment.