My sleeper course in the Naples, FL, area is Talis Park Golf Club, the rebranded layout of the formerly named Tuscany Reserve development. The centerpiece of a 450-plus-acre gated community that sputtered and stalled in the wake of the Great Recession and the real estate downturn, this 2004 Greg Norman/Pete Dye collaboration remains a winning, member-friendly design. Meanwhile, the development itself is on a comeback trail with new ownership and aggressive plans to reposition the property and its home prices. More on that later. 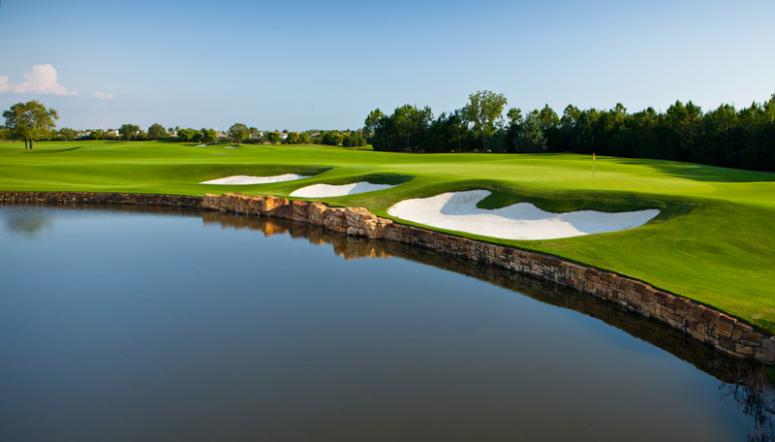 One way to measure a golf course experience is to recall what was said about it afterwards at the 19th hole. Well, I only wish Norman and Dye had been eavesdropping from the next table because we all had positive comments. First, the layout is very playable and accommodating to all levels of play. The greens have open approaches and few have any full forced carries over water hazards. Moreover, there’s usually a bailout area and alternate route to the green on even the most demanding holes. Secondly, our group was duly impressed with the overall conditioning with tees, fairways and greens all maintained at tournament standards. The rough at Talis Park is also more forgiving and less dense than what is more commonly found around Naples. On these notes alone, what’s not to like?

The shot values around Talis Park are strong but not penal in nature. For example, the 340-yard (back tee) par-four 4th hole is especially admirable. The design beckons a devilish risk-reward decision from the teebox. If you select driver and hit it well and remain slightly right of the pond-protected green site, you’ll be rewarded with a short approach shot or pitch and not have to worry too much about the hazard. Of course, if one yanks a driver left or tries to reach the green your ball may end up in the drink. Even a smart layup poke with a fairway metal brings the hazard into play when the pin is tucked on the left side. This is an ingeniously conceived short par-four worth the price of admission.

The back side is more demanding than the front but by that time one’s game should be coming around. Or so the theory. Other than a too long gap between the 11th green and the 12th tee, it’s another pleasing nine. The 12th hole is a nifty short par-four with a pond lurking down the left side and grabbing a portion of the green bolstered not by Dye-trademark railroad ties but rather by a more fitting and picturesque stone wall. (Note: this design is Norman/Dye and not vice versa.) And again, there’s an ample bailout and chipping area on the right side of the green for those of the faint of the heart on their approach shots.

The bunkering here is also impressive. They’re placed in just the right spots and are not overwrought in number or design. However, if you find yourself in a steep faced fairway bunker you’ll probably have to think “just get out.” But the overall layout affords such a pleasant golf experience and test at the end of the day you’ll think “just get back here.”

The primary reason golfers may underestimate Talis Park Golf Club is that its curb appeal is currently low with an array of vacant lots and the specter of an unfinished and massive edifice (the once planned clubhouse) overlooking the 18th green. But things are looking up with new owner Syd Kitson now repositioning the community in both its price points and image. Its original owner, WCI Communities, marketed Tuscany Reserve as a turbo-charged exclusive golf course development—marked by lush Mediterranean landscaping and lavish infrastructure—with home prices starting at $2 million.

Kitson now expects 550 homes to be priced in the $700,000 to $2 million range and situated in three neighborhoods in a park-like setting. And instead of a grandiose clubhouse, Talis Park will be highlighted by a town center. As quoted in the Naples Daily News that later devoted a positive editorial on the revitalized project, Kitson said, “We won’t have one of those big clubhouses people are intimidated walking into. There will be a village center and indoor and outdoor spaces that will be comfortable for residents, their families and their friends.” Kitson said the village center will be the locus of an ice cream shop, cafe, golf club, pool, spa, racquet club and fitness center.

Sometimes it takes a village to raise a child as well as a golf course community.