On the cusp on Matt Kuchar’s triumphant stroll up the 18th fairway on Sunday at the Players Championship, one of the most intriguing rules situation went virtually unnoticed that resulted in saving the player at least $50,000. Here’s what happened: Kuchar’s playing partner Kevin Na teed off 18 and his drive was pushed right into the rough and near a cart path. Watching it on television, the next scene we see is Na dropping his ball on the cart path. A few moments later, we then see Na addressing the ball on the cart path with a fairway metal. From there, Na knocks it onto the green where he ends up making an amazing par. 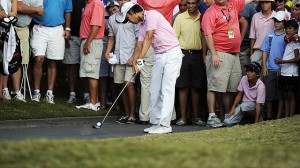 Knowing the rules paved the way for Kevin Na

OK, so what transpired here? I figured Na would get relief from where his ball originally rested since his stance would have been on the cart path. But the rules also say the player needs to take complete relief from the cart path which meant his ball wouldn’t have ended up on it. So how did Na end up making a shot off of the path? Perplexed, I called Roger Ostrander of Grand Rapids, Mich., a 20-year rules official who has worked six U.S. Opens, nine Senior Opens, and 14 Mid-Amateurs. Luckily, Ostrander had also observed the sequence of events on Sunday. Better yet, he had already reviewed the situation by phone with the PGA Tour rules staff at Ponte Vedra.

“What wasn’t made clear on Sunday,” said Ostrander, “was the fact that Na’s tee shot rested in an area deemed ground under repair—an area of wear and damage due to gallery traffic. As such, he was entitled to relief and after determining the nearest point of relief, the ball may be dropped on the cart path, strange as that may appear.” Ostrander said that Na dropped his ball twice and each time it rolled into an area that didn’t provide relief and so Na was able to place his ball on the surface of the cart path—the flattest, cleanest lie— at the spot of the second drop. “The television commentators were too busy sizing up Kuchar’s second shot to fully explain the situation,” said Ostrander who last year was the recipient of the GAM’s Distinguished Service award. “To me, it also showed how talented these players are and how they always strike the ball first even off a cart path.”

By making par, Na finished T-7 and earned $296,083. If he had made bogey, he would have earned $247,000 and if he made a double, he would have earned $199,500. So you gotta hand it to Na, especially considering all of the angst he endured the last two rounds, to keep a clear head and have the rules work in his favor. As Roger Maltbie used to say on the old NBC Golf segment, “If you play this game, you gotta know the rules.”

And if you don’t, be sure to consult a rules official.