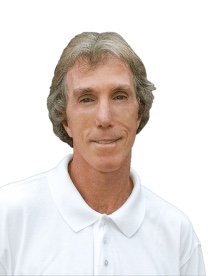 As some of my golf buddies will attest, I had a brief but memorable encounter with the legendary Mac O’Grady, the former PGA Tour player of the ‘80s best known for attending qualifying (Q) school 17 times before earning his Tour card in November 1982. He won twice on the Tour, swinging right-handed while putting left-handed.

An eccentric character who was ambidextrous with his full golf swing, O’Grady was once affectionately called “Wacko Grady” by TV commentator Gary McCord, who has known him since their teenager days together in Southern California. It takes one to know one.

How “wacko?” Well, O’Grady once tried to enter the Chrysler Team Championship as both halves of the same team. He planned to play one ball left-handed and the other right-handed. Another time, according to Los Angeles Times golf writer Tom Bonk, Mac tried to enter the B.C.Open under the name Mac O’Grady II and was going to do it left-handed. As Bonk wrote, “He wanted to play with Mac O’Grady I, who could get in [with his PGA Tour past champion status]. O’Grady played as a right hander, but wanted to enter under the second name as a left hander.”

When covering the Buick Open in the ‘80s at Warwick Hills in Grand Blanc, I would regularly follow O’Grady and marvel at his flawless swing. Even so, he rarely made the cut and his best finish was a T-47th in 1984. Still, I was fascinated by him and his colorful and controversial ways.

Forced to retire in 1990 from the Tour due to a spine disorder, O’Grady gained new fame as a sought after golf instructor schooled in and mentored by the esoteric swing principles of Homer Kelley’s The Golfing Machine. (Even this past February, his name was mentioned as influencing the teaching of elite player instructor Drew Steckel who counts among his students Kevin Na, Pat Perez, and Jason Kokrak.)

When I founded the West Michigan Golf Show in 1989, my goal was to complement exhibitors’ booths and displays with a stage area where some of the game’s best teachers would provide free clinics and seminars. As a golf magazine editor, I knew providing credible and attractive golf “content” in terms of expert instruction would be vital for a paid admission show.

That first year, the WMGS teachers were: Hank Haney, celebrated then as Mark O’Meara’s teacher; Mike Hebron, a PGA Master Professional and author from NY; and Michigan’s very own Evan “Big Cat” Williams, a two-time National Long Driving champion. They were all popular with the attendees and I knew top teachers had to remain a staple of the show. (Thankfully, ShowSpan Inc.—the new owner of the WMGS beginning in 2002—has carried on that tradition.)

In the early ‘90s, I had the bright idea of inviting O’Grady to be part of the Show as a headliner. His name recognition was high and his golf school in Palm Springs, CA had a cult-like following, especially among fellow teachers.  But how was I going to contact him in a direct and personal way, given his reclusive and wary personality? I needed to pin down his telephone number.

It might have been Jack Berry, good friend and mentor, who suggested I contact a certain West Coast media colleague of ours with the idea that person likely knew Mac and had his number.

But this was the strict condition under which it was given:

“Terry, under no conditions do you tell Mac how and from whom you got his home number. Before you pick up the phone to call him, have a white lie story in mind or simply tell him ‘it’s confidential.’ But I’ll tell you now, if you try the latter it won’t fly with Mac. One more thing, Mac won’t answer the phone. His wife Fumiko screens all his calls.”

Mindful of the journalist’s credo to protect and honor one’s confidential sources, I devised a story about how I got his number.

I then called O’Grady’s home number.

As predicted, Fumiko answered and quietly said hello. After I asked for O’Grady she politely inquired who I was and the purpose of my call. Upon listening to an abbreviated spiel about myself as a golf writer from Michigan who used to cover her husband at the Buick Open, she told me to wait while she spoke to him.

A few tense minutes passed before Mac came to phone and said, “Who is this?”

I went into my best Irish charming self, expounding on my credentials as a golf writer and the Buick Open while also sharing my admiration for Mac’s Tour career and his excellent reputation as a golf instructor and teacher. Taking a few breaths, I next explained the reason for my call—about the West Michigan Golf Show and how it would be an honor to have him as a headliner at the next year’s show. “And of course, Mr. O’Grady, I would pay you an appearance fee and all travel expenses.”

During my pitch, he never said a word, which seemed encouraging.

When I finished, and after another long pause, he said:

“Look, before we started talking about this Golf Show of yours in Grand Rapids, I have one big question to ask first: ‘How the *&$#%!# did you get this number?’”

Heat and fire seemed to pour like lava through the receiver.

“Well, Mr. O’Grady, a Tour caddie at last summer’s Buick Open gave it to me.”

“Give me the name of that caddie!”

“I really don’t remember his name,” as my nose suddenly grew more in length.

“Until you give me that caddie’s name I won’t have anything more to say to you or about your &%$#!! Golf Show!”

No surprise, I never called him back.

But I’ll always appreciate the quote he made to The New York Times sports columnist Dave Anderson in 1983 about how he’d celebrate if he ever won a Tour event.

“I’m going to go back to the Q-school and tell all those guys that your happiness in life is measured by how deep sorrow has cut within you.”

True to your words, Mac, the call cut deep. Guess I deserved it.

But I finally got over it…just last week.

photo courtesy of the PGA TOUR

2 Responses to “Mac O’Grady and me”