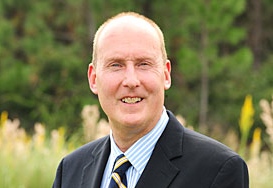 A longtime and respected PGA of America rules official, Mark Wilson of Grand Rapids on worked at the fourth hole on Thursday at the Masters. This year marks his 19th Masters and 54th major tournament at which he has served as a rules official. Golf Professional Emeritus at Watermark CC in Grand Rapids, Wilson is now a faculty member at Ferris State University’s nationally acclaimed Professional Management Program in Big Rapids.

“I was very happy at Watermark and probably could have retired from there but the opportunity at Ferris State and the PGM program was too good to pass up,” said Wilson, a Michigan Golf Hall of Fame member. “Not only do I get to teach in a fantastic program but I’m around young men and women aspiring to be golf professionals.”

As a rules official, he also gets to be around and play a significant role at the Masters, the game’s iconic tournament.

In the run-up to the tournament, Wilson and some of his PGA of America colleagues were in charge of marking the course, including the five “dropping zones” found on the course near water hazards—at no. 11, no. 12, no. 13, no. 15, and no. 16. Mark and his team also handle the red and yellow markings on the course, defining water hazards.

Assigned to the 4th hole for the opening round, Wilson was available to players in case they had a rules question on the long par-three. “Before the hole was lengthen, there wasn’t a lot of rules situations and questions there,” said Wilson. “But now to its increased length, players are hitting longer clubs and they’re getting in more trouble around the patron observer stand.”  Case in point occurred in 2012 during the final round when Phil Mickelson’s tee-ball went astray, hit the railing on the stand, and ended up on the pine straw. He attempted to hit the shot right-handed, muffed it and ended up with a ruinous triple bogey. “In that sort of situation, a rules official is just letting Phil play the hole because there was no question about line of sight relief from the patron stand—which is a common occurrence when balls go left there.”

Wilson’s “office hours” at #4 were from 7:30 am until when the last grouping completed the hole at approximately 3:00 pm. “Those hours are a lot better than when I sometimes serve as a head tournament rules official,” said Wilson. “At those tournaments—such as the PGA Championship—my hours are dark thirty to dark thirty.”

Other assigned holes for him this week are: #16 on Friday; #10 on Saturday; and #2 on Sunday. Left off the tee on #2  is a place no Masters player wants to have a conversation with Wilson. A  steep bank there catches errant drives and sends them down into a woodsy lateral water hazard. It’s an area dubbed by players and caddies as the “Delta Ticket Office,” because if player’s ball finds it, a bad score on the hole usually results, many times leading to a player missing the cut, necessitating a change in airline tickets for Friday night.

Given his experience and stature in the game, Mark Wilson will surely reach that significant milestone, as well.